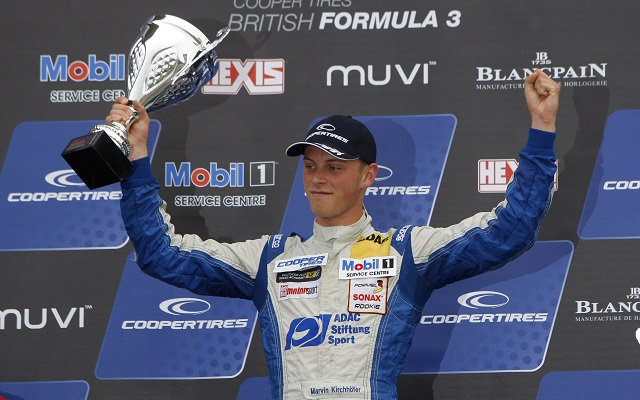 British F3 guest driver Marvin Kirchhofer was triumphant in the reverse-grid race of the second round of British F3 at Silverstone.

Kirchhofer was the winner of a tough race of attrition, in which only three of the starting seven cars were running at the end.

The German, who competes in GP3 with ART GP this year, started the race from third on the grid and managed a great getaway to leapfrog front row starters Matt Rao and Andy Chang Wing Chung.

Championship leader Martin Cao also got around Rao and Chang during the opening lap, while Egor Orudzhev was less effective in dealing with traffic. The Russian racer ran wide on exit while attempting to go around Chang Wing Chung and rejoined in a hasty manner. His right-side wheels ended up making contact with Chang’s car, which put the SMP-backed driver out of the race on the spot and forced the Macanese racer to subsequently come into the pits and retire.

The first half of the race saw Fortec cars run in 1-2-3 formation a few seconds apart with no foreseeable fighting for podium positions. However, that all changed when rain began to hit the track with 19 minutes to go and ended up setting the tone for the remainder of the race.

The early light rain immediately made handling difficult with Double R’s Camren Kaminsky being caught out by the conditions. The American lost his car on corner exit and went straight into the tyre barriers, ending his race.

The rain worsened a bit over the next few minutes, prompting Peter Li Zhi Cong to gamble with a switch to wets. It proved to be the right call, as the rain became even stronger over the subsequent laps, with Fortec’s Matt Rao also taking to the pits and emerging in his original third position.

However, his race would come to a halt there as Rao wound up losing a badly attached right rear wheel during a left turn and slid into retirement. His off prompted a red flag which signified the end of the race, with Kirchhofer declared the winner.

Cao was classified in second, ahead of Li Zhi Cong, who took his first podium finish in British F3.

None of the other drivers were classified as finishers.