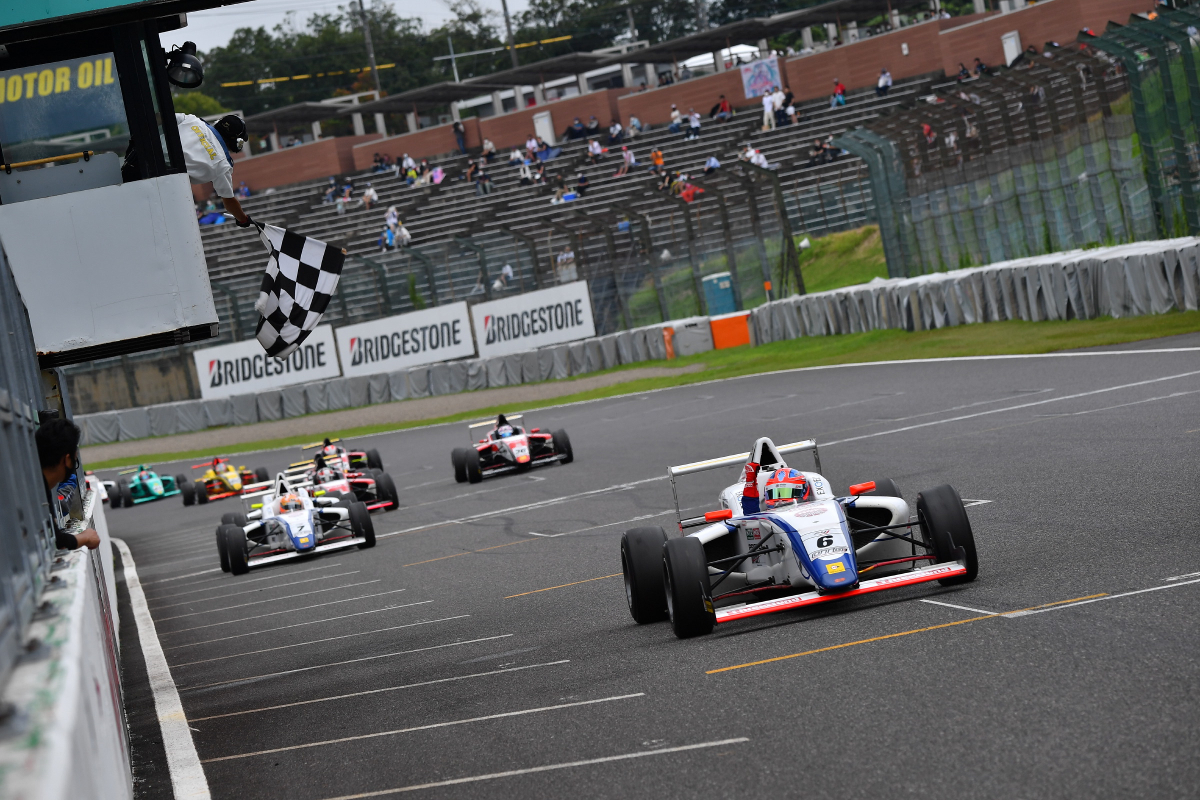 Iori Kimura triumphed from pole in the opening race of the Japanese Formula 4 championship’s postponed Suzuka round, but it wasn’t easy.

The Saturday race started behind the safety car due to the track being wet, and the cars weren’t released until lap three of 11.

Honda junior Kimura fled from the action behind, opening up a lead of 1.3 seconds after the first lap of racing. Toyota junior and title rival Seita Nonaka was in second, but he was passed around the outside of 130R by Rin Arakawa and seconds later Kakunoshin Ohta took the outside line for the chicane to pass him too.

The track then got wetter again, with Ohta having a very loose moment while many cars behind went off wide at 130R. This was giving Kimura some reprieve, as he wasn’t actually the fastest driver on track.

On lap six Ohta stuck to the outside around the first two corners to take second from Arakawa. By the end of the lap Arakawa was down to fifth, as Honda junior Syun Koide passed Nonaka around the outside of 130R and then darted down the inside of Arakawa at the chicane to move into a podium spot.

As Ohta closed in on Kimura, Koide closed in on Ohta in an all-Honda battle for victory. Ohta again used the outside of 130R to take the lead on the next lap, and the top three were now spread by less than a second.

They then got even closer as the safety car was called out after Nobuhiro Imada hit Yutaka Toriba into a spin at the chicane and it left him beached. The incident was cleared up in time for just one more lap of racing, and Kimura was immediately on the attack. He tried the outside of the hairpin and Spoon Curve, but couldn’t find a way through.

At 130R he drew alongside Ohta on the outside and kept it there, reclaiming the lead to win as Koide also pressured.

Nonaka, who had passed Reimei Ito at the start of the lap and sailed by Arakawa for fourth when he had to use opposite lock at Spoon, had the run to pass Koide at the chicane but Ohta went too deep ahead of him and got in his way, enabling Koide to hold onto third for a Honda 1-2-3.

A race-long battle between Toyota juniors Eijiro Shimizu and Jiei Okuzumi was broken up by Arakawa’s late error, as he finished between them in sixth place. All three were promoted a spot post-race however as Nonaka was penalised 40s for an illegal pass at the restart.