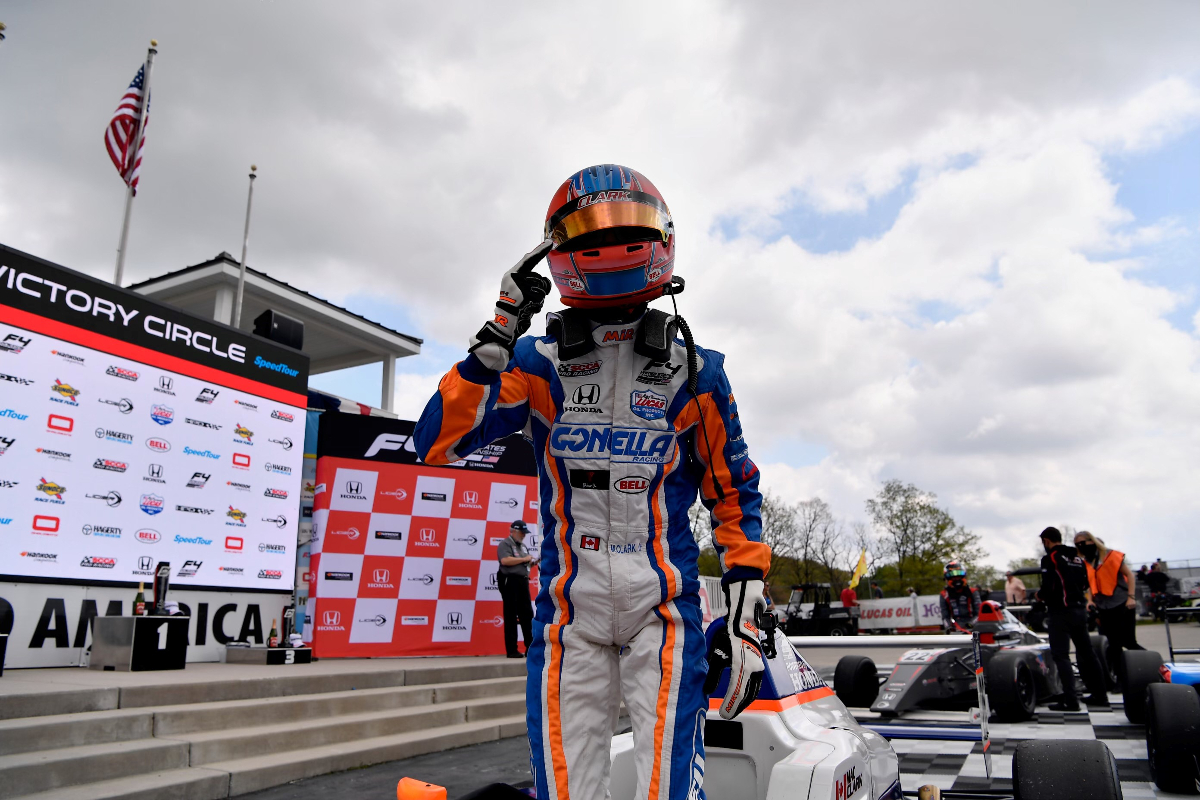 The current Indy Pro 2000 car on iRacing was used for races around a digital version of Virginia International Raceway that was open to Road to Indy hopefuls.

Clark tried to pass Sherlock behind the pace car as they headed to the rolling start, but came under attack from de Tullio at the opening corner of race one. He couldn’t get a move done, and Clark then passed Sherlock at the end of the back straight.

Sherlock dived down the inside of turn one to reclaim the lead on lap two but went too deep and dropped to third behind de Tullio who then set fastest lap and passed Clark at turn one to lead on lap three. At the turn four left-hander Clark got spun off by Sherlock, dropping him to 11th.

Sherlock passed de Tullio at the Roller Coaster corner to lead on the next lap, but de Tellio responded before Sherlock then served a drive-through penalty for hitting Clark. That lifted Mann to second and Velocity Racing Development’s Noah Ping to third, and the top three finished the 12-lap race that way while Sherlock got fastest lap as he recovered from sixth to fourth.

There were many drive-throughs handed out as when drivers went side-by-side into corners it often ended with contact. Several over drivers went off-track with unforced errors.

Sarah Fisher Hartman Racing’s protege Elliot Cox had one of the messier races, spinning out of the last corner on lap five, then slowing mid-corner at turn one on lap nine and catching out Athreya Ramanan who went off and copped a drive-through. The attrition rate meant Clark rose back up to seventh.

That put him fourth on the reversed grid for race two, set by flipping the top 10 finishers from race one, and Cox started on pole ahead of Pabst Racing’s Ayrton Houk – another with a messy race one – and Velocity’s Sam Corry.

Cox raced away at the start, and Clark pulled off a great over-under pass on Houk at Oak Tree to get himself into second. A big crash in the midfield included de Tullio, who had started 10th.

Clark went all the way around the outside of turn one on lap two to take the lead, as Cox made two lock-ups on the inside, and from then on was unchallenged.

A lead of 27 seconds opened up between himself and second place, helped on lap three when Cox’s side-by-side battle with Sherlock put the latter into the barriers and retirement and a similar battle with Houk also sent his rival off.

Cox remained in second though until the penultimate lap, when Ping passed at Roller Coaster. De Tullio made strong passes as he went on a recovery drive to fourth.