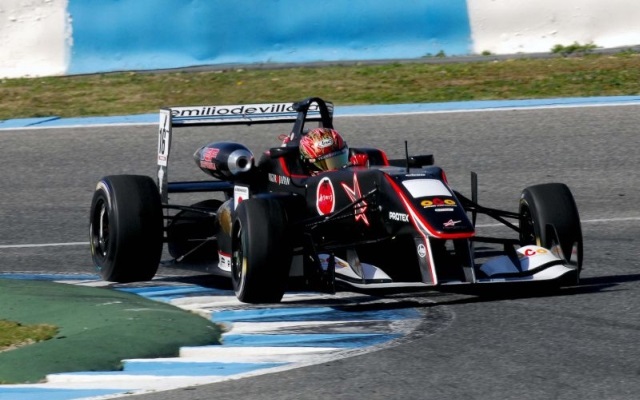 EmiliodeVillota Motorsport’s Yu Kanamaru was the quickest person on the first day of Euroformula Open Winter Series testing in Barcelona.

The Japanese driver, who finished his rookie season in the series in fourth, maintained his great pre-season form and yet again recorded the overall best time of the day.

The 20-year-old driver ended the final, fourth session of the day on top, narrowly edging out another sophomore driver Konstantin Tereshchenko by 0.022s.

All but one driver recorded their best times in the final segment of running.

Italian youngster Leonardo Pulcini and Israeli Yarin Stern were also only one tenth away from the fastest time while Mexican Diego Menchaca completed the top five.

It was Tereshchenko who started the day in the best shape with topping the first outing of the day, beating his fellow Campos driver Menchaca by almost four tenths.?West-Tec’s Stern was third fastest, followed by Russian Dzhon Simonyan and Pulcini.

In the following session Kanamaru bettered Tereshchenko’s time by two tenths to take first, followed by Tereshchenko himself and Stern, while Pulcini and Simonyan also maintained their top five positions.

BVM Racing’s William Barbosa found himself in the lead in the third session, in which lap times were a bit slower.?The Colombian, who will spend his second season in the championship was closely followed by the leading trio of Tereshchenko, Kanamaru and Stern while Menchaca completed the top five.

The final day of the Winter Series will be held tomorrow with four more testing sessions.