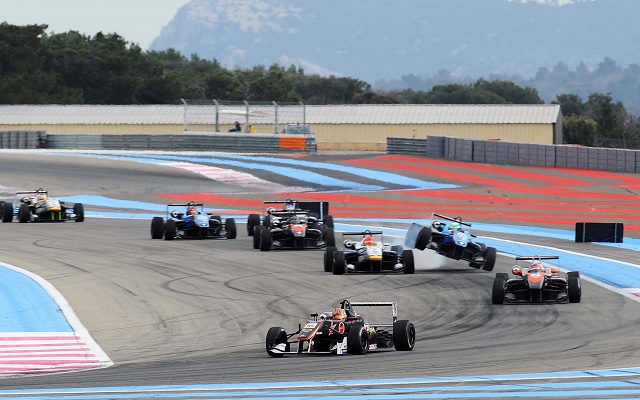 Yu Kanamaru and Alessio Rovera won the first two European junior single-seater races of the 2015 season as part of the Euroformula Open Winter Series round at Paul Ricard.

The second day of the event started with two testing sessions. West-Tec duo Yarin Stern and Tanart Sathienthirakul dominated the first outing in the morning, followed by the RP trio of Dzhon Simonyan, Igor Walilko and Damiano Fioravanti.

In the second session it was Kanamaru who completed a lap in less than two minutes for the first time this weekend, clinching the top spot. Stern, Mexican rookie Diego Menchaca, Rovera and Vitor Baptista completed the top five.

The afternoon programme began with a qualifying session, which determined the starting order for the first race. Kanamaru maintained his form as the quickest driver in the field, albeit he was only able to beat Vitor Baptista to pole by a narrow 0.09s.

The rest of the top six positions were decided in a close battle with sophomore driver Simonyan taking third, followed by Menchaca, Rovera and Konstantin Tereshchenko.

Stern and Sathienthirakul ended up as seventh and eighth fastest with Italian Fioravanti and Guatemalan Andres Saravia completing the top ten.

Kanamaru’s pole ended up paving way for a dominant lights-to-flag victory in the first race. RP’s returnee Simonyan managed a calm drive in second but he was unable to challenge the EmiliodeVillota driver for the lead.

Sathienthirakul was running third in the early stages of the race, yet both Rovera and Vitor Baptista eventually overtook the Thai driver. While Sathienthirakul finished fifth, he was closely followed by series debutant Menchaca, who escaped an early collision with Stern.

With the top six from race one reversed for race two, Menchaca was handed pole. However, Kanamaru made an impressive start and soon wrestled his way into the lead.

Although he led twelve out of fourteen laps, the Japanese driver was passed by both Rovera and Vitor Baptista. As a result Rovera, who still haven’t secured a seat for the regular season, emerged victorious with Vitor Baptista taking an impressive second.

With Kanamaru standing on the final step of the podium, pole-sitter Menchaca had to settle for fourth. Saravia and Sathienthirakul finished fifth and sixth respectively while Walilko picked up another seventh place.

The third and final event of the Winter Series will take place on the 12th and 13th of March at Catalunya.