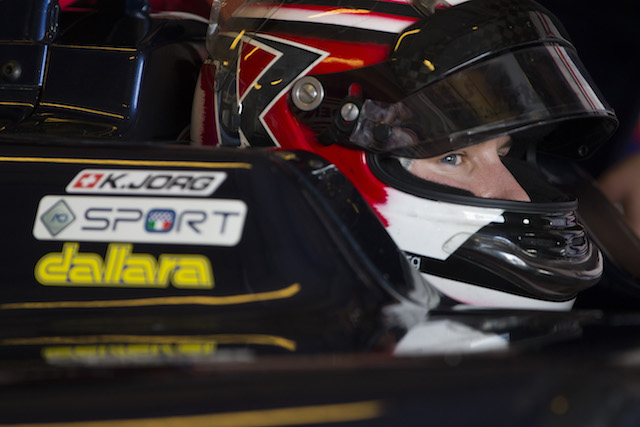 Kevin Jorg has become the first driver announced for the 2017 GP3 Series, switching from DAMS to Trident as he chooses to stay in the category for a second year.

Stepping up from Formula Renault, where he came third in the Eurocup and second in NEC in 2015, Jorg qualified on the front row for his DAMS’ GP3 debut in Barcelona last May, but finished 14th in the standings with his best result of fourth coming at the final round in Abu Dhabi.

As was the case 12 months earlier, the Swiss driver?tested in Formula V8 3.5 at the end of 2016, but has opted to remain in GP3 for another season.

Jorg was a member of the Renault Sport Academy during 2016 off the back of his Formula Renault results, but the announcement of his deal with Trident makes no mention of the French marque’s junior programme.

The 21-year-old?was not one of the eight drivers Trident ran in the post-season test in Abu Dhabi last month, but did previously test with the Italian outfit at the end of 2015.

“We had the chance to see him in action in 2015 in a collective postseason test at Yas Marina and we were quite impressed,” said team manager Giacomo Ricci.

“He convinced me with?his raw speed and for his ability to adapt. Back then, he stayed at the front end of the charts in every session.

“Kevin is definitely a great prospect and I’m sure that we will be doing a good job together this season. We are really motivated and looking forward to work with him. We are sure we have secured one of the quickest guns on the market.”

Jorg added: “The goal is to stay among the frontrunners and collect several podium finishes.

“I’m absolutely confident that Trident will provide me with all what it takes to reach all the goals I have set for myself.

“I can’t wait to get back on-track with my new team.”

Giuliano Alesi is expected to remain with Trident for a second season, and was joined in running with the team in the Abu Dhabi test by the likes of Arjun Maini, Santino Ferrucci, Ryan Tveter, Raoul Hyman and Matheus Leist.