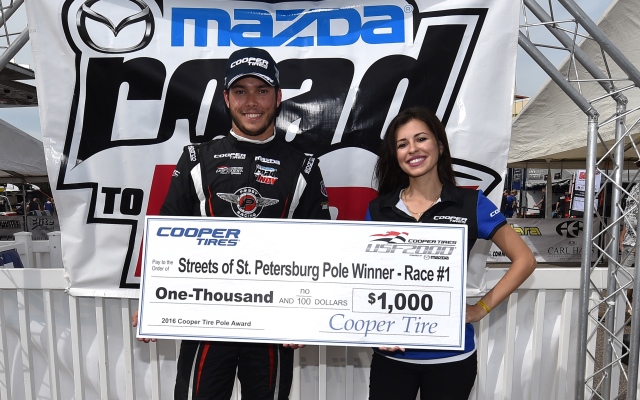 Reigning Australian Formula 4 champion Jordan Lloyd secured pole position for the first race of the USF2000 season in St. Petersburg, in his first appearance in the series since last April.

He will share the front row of the grid for Saturday morning’s season-opening race with Canadian?Parker Thompson, who was second-quickest for Cape Motorsports with Wayne Taylor Racing.

Kiwi rookie?James Munro qualified fifth for his USF2000 debut for Team Pelfrey, ahead of the second Cape Motorsports car of?Anthony Martin in sixth.

Seventh was JAY Motorsports’?Luke Gabin, while Brazilian?Victor Franzoni, another driver returning to USF2000 after eleven months out, was eighth-fastest for ArmsUp Motorsports.

Two of the youngest drivers in the series will start on row five: 16-year-old?Robert Megennis of New York, and 15-year-old?Jordan Cane of Chichester, England, both driving for Team Pelfrey.

There are 26 cars – nearly double the average number of entries from last year – expected to take the green flag in the first race of the season .