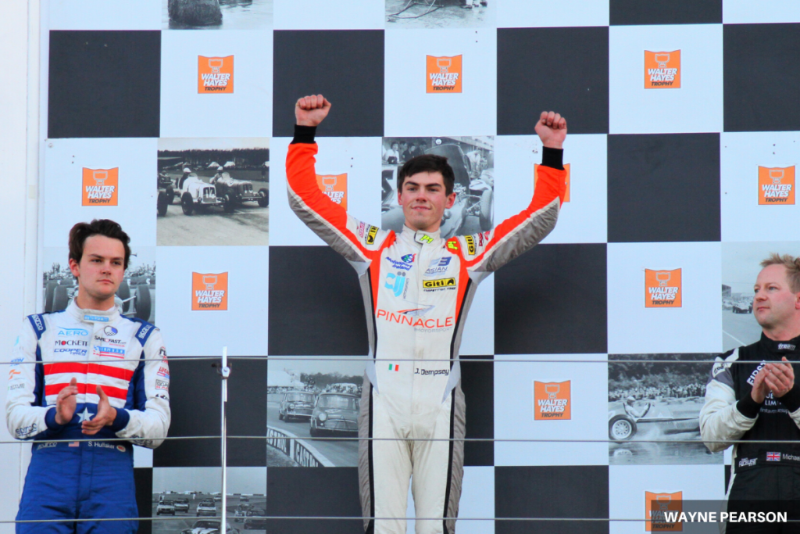 The Irishman comfortably led the first four laps of the race, but the race was then red flagged due to a variety of crashes.

In the restarted encounter, shortened to 10 laps, he was even more dominant and finished with a 5.338 second advantage.

His team-mate Moyers came through from 10th on the grid, and had made it up to sixth before the red flag.

He gained a place at the restart, then passed Myerscough College’s Jack Wolfenden at Copse for fourth on the next lap. His overtake on B-M Racing’s Rory Smith for third at Brooklands ultimately resulted in Wolfenden passing both, but Moyers reclaimed the spot at the same corner the next lap.

For the rest of the race, Moyers battled with Cliff Dempsey Racing’s Scott Huffaker. They passed each other twice before Moyers settled it on the penultimate lap, leaving enough room for Jonathan Browne to also nab third from his CDR team-mate.

Front row starter Huffaker moved back on the podium with a move at Becketts, but didn’t have enough time to stop Moyers from equalling Danny Watts run from the back of the Progression Race grid to second in the final.

Wolfenden settled for fifth, while the third KMR car of Michael Eastwell charged up to sixth – despite being shuffled down several spots on the grid for the restart.

Completing the top 10 were Luke Cooper and Rory Smith. Cooper started fourth and was in the group battling for second until a troublesome clutch cost him on the last lap, while B-M Racing’s Smith was hit up the rear by Joey Foster at Brooklands early on and cradled damaged for the rest of the race.

Don Hardman Racing’s Foster had joined Moyers in progressing through the ‘second chance’ races after they clashed in their heat, and after striking Smith’s car he went off at speed and ended his race.

An off at Copse for Morgan Quinn (Team Dolan), and a crash between Jamies Chadwick and Stanley caused the red flag.

What if the Motorsport Games had taken place 50 years ago?