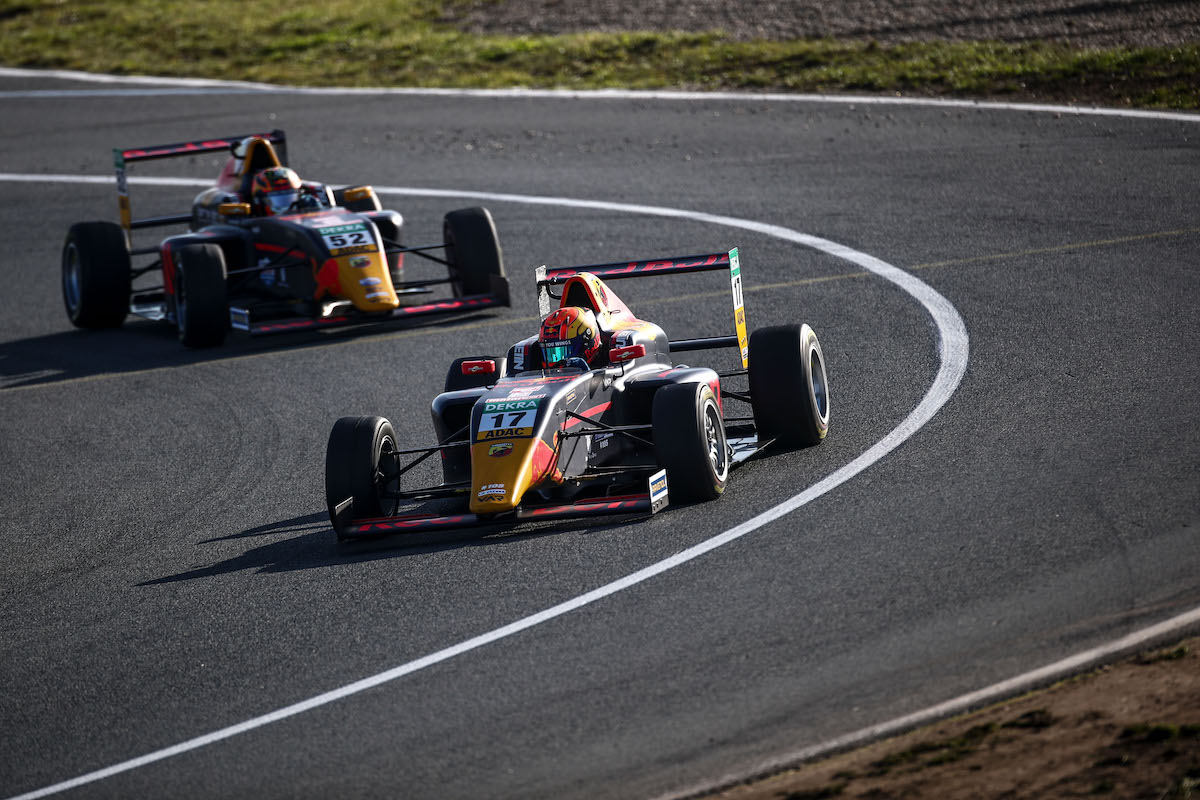 Jonny Edgar has won the 2020 ADAC Formula 4 title ahead of fellow Red Bull junior Jak Crawford with a second-place finish in the season finale behind maiden winner Tim Tramnitz.

The podium finish at Oschersleben was enough to put him two points ahead of team-mate Crawford in the final championship standings.

The pair came into the final race of the year separated by nine points and side-by-side on the fourth row of the reverse grid, Edgar one position ahead of Crawford. Dropped scores meant he needed to outscore his title rival by eight points to win the championship.

Edgar got the better start, jumping Ollie Bearman through the first corner and challenging Joshua Duerksen for fourth.

Duerksen and Edgar made small contact as Edgar came through, but it didn’t appear to cause an issue for the Van Amersfoort driver and he continued in fourth.

Next in his sights was Victor Bernier, who put up a strong defence but couldn’t keep Edgar behind him.

Meanwhile, Tim Tramnitz got a good start from pole position and was pulling away from second-placed Elias Seppanen when the safety car was brought out just before the halfway point. An off for Roee Meyuhas left the R-ace GP driver with damaged suspension and he was unable to continue.

Edgar was the biggest winner on the restart, passing Seppanen for second at Turn 1.

Further back, Crawford was stuck behind the battling Bearman and Duerksen. A wide moment for Bearman while running side-by-side with Duerksen almost caught Crawford as he rejoined the circuit after a trip through the gravel, but Crawford avoided him and moved into sixth.

Crawford still needed to make two more positions in order to secure the title, and spent the remainder of the race trying to find a way past Duerksen.

Duerksen offered no opportunity and, in the closing laps, Crawford himself came under pressure from Vlad Lomko.

In the end he crossed the line sixth, ending the season two points behind Edgar.

Tramnitz, unchallenged throughout the race, came through to take his first victory, moving ahead of Bernier for fourth in the standings.

Seppanen stuck with Edgar until the chequered flag but couldn’t get close enough to challenge, taking third ahead of Bernier and Duerksen.

Bearman recovered after his off to seventh, while Erick Zuniga dived past Kirill Smal and Lomko to finish eighth.