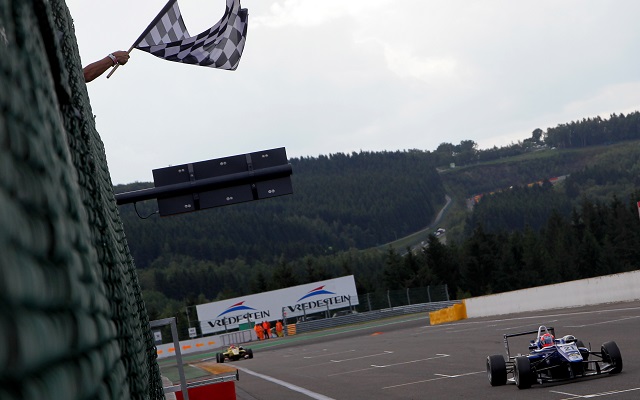 Emirati racer Ed Jones triumphed on his return to Formula 3 racing, winning the first race of the British F3 round at Spa.

The F3 Open champion made a smooth getaway from pole and stayed in control for the entirety of the 30-minute race.

His teammate Sean Gelael – the only other driver in the field driving a newer-spec F312 – dropped behind second row starters Roberto Merhi and John Bryant-Meisner off the line.

The safety car came out on the opening lap, triggered by an off for Scotsman Sam MacLeod, and, when it was back in on lap three, Gelael took little time to charge back through to second place.

The Malaysian stayed within three seconds of Jones in the final minutes of the race but didn’t manage to make up ground and had to settle for second.

Merhi finished as the highest-placed points-eligible driver in third, leading Bryant-Meisner and Motopark duo of Indy Dontje and Nabil Jeffri.

Martin Cao ran in sixth early on in the race, but picked up a drive-through penalty for a violation of the start procedure and was demoted to last. He overtook Kang Ling and Camren Kaminsky in the final minutes of the race to claim 11th overall.