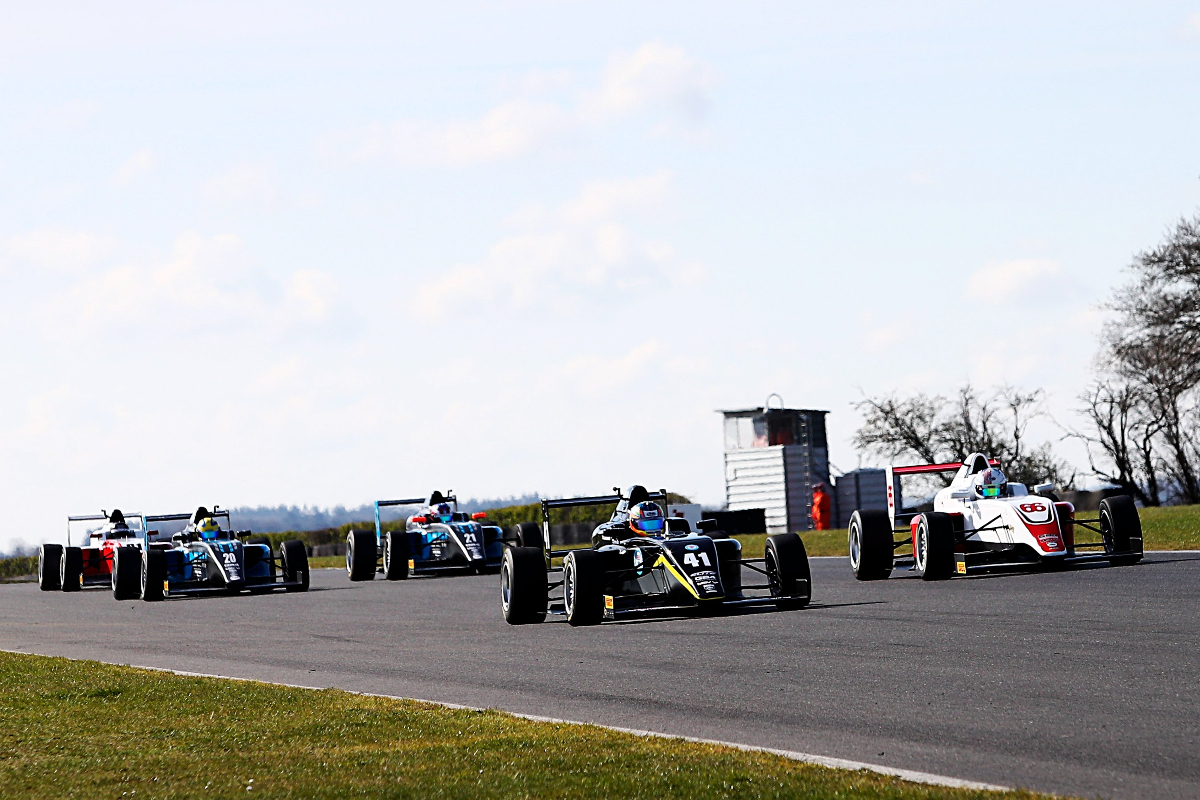 MotorSport Vision chief executive Jonathan Palmer shares his thoughts on GB4’s first weekend of racing, the new series’ non-rivalry with British F4 and what he expects as the inaugural season progresses

Formula 4 racing in Britain is changing. British F4 will begin it’s first season with a new vision under the organisation of Motorsport UK, while MSV’s new GB4 championship gives drivers with a lower budget the opportunity to move into slicks-and-wings racing and have the opportunity of progressing into GB3 and possibly beyond.

Twelve drivers across six teams, in total, made it to a frosty Snetterton last weekend for GB4’s first ever race meeting.

Across the three races held, three drivers from three separate teams took to the top step of the podium, there were some impressive battles and some welcome surprises near the top of the grid.

“I’m absolutely delighted with the way GB4 has got underway,” Palmer said to Formula Scout.

“It’s a brand-new championship, it’s occupying a new niche with comparable level of performance to the British F4 championship but through a whole range of measures it’s designed and it has proven to be a much lower cost and it has providing opportunities to drivers, and I don’t think there is anyone on the grid here that would have probably found the money to be able to do British F4.

“So it’s providing, frankly, an essential opportunity for drivers who believe in themselves and families and sponsors that believe in the drivers – an opportunity to move into single-seater racing and to start their path towards their goal of Formula 1.

“It’s so important that this first step in single-seaters can be an affordable one. There’s no doubt that British F4 will be a very professional championship but whether it’s the British F4 championship or the Italian or the German, they are talking budgets of €350,000 to €400,000 (£333,490).” 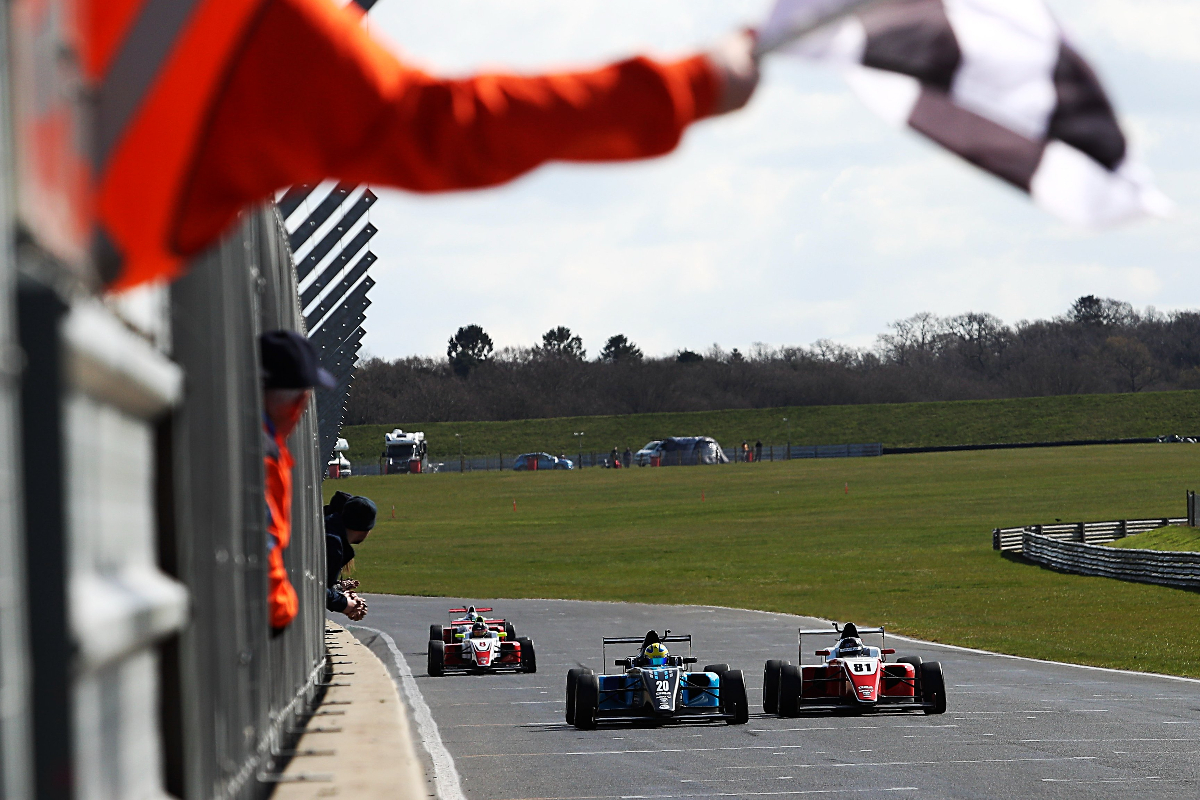 The current British F4 replaced British Formula Ford in 2015, and led to the existing, non-FIA specification BRDC British F4 series run by Palmer change its name to Formula 3 in 2016.

“I can remember when I was doing BRDC British F4 when I started at sort of £20,000 and things,” Palmer said of cash provided for entrants in the old series. “But, you know, the money is very hard to raise and I think its really exciting that we’re providing these drivers with an opportunity to launch their single-seater career.”

In a media roundtable at Snetterton, Palmer spoke further on the success of GB4’s first ever race on the Saturday.

“Everyone finished, nobody broke down, the racing was clean, the strategy was good. As we know the first race is early compared to other championships but on the other hand it has made it that these guys can have their first race without being in the shadow of GB3 drivers, and the GB3 teams can focus on looking after these guys in their first GB4 race.”

There is interest from 12 teams to race in GB4, but only half turned up as not all had been able to sign drivers to race despite already buying cars from Europe. However, Palmer has no worries that the grid will grow during the season.

“I have no doubt from the mood around that I think the grid is going to grow and I’m sure we’ll have 15-plus, [maybe] 18 cars by the middle, towards the end of the year. I think it’s done just what we wanted, it’s not competing with British F4 but it’s providing opportunities in great cars for drivers that otherwise wouldn’t be able to progress and get into a single-seater career.

“Any championship before you get to F1 is just a stepping stone to the next one and it’s really important that everybody appreciates that whatever route you take, ultimately thee guys all want to try and get to F1 if they possibly can. 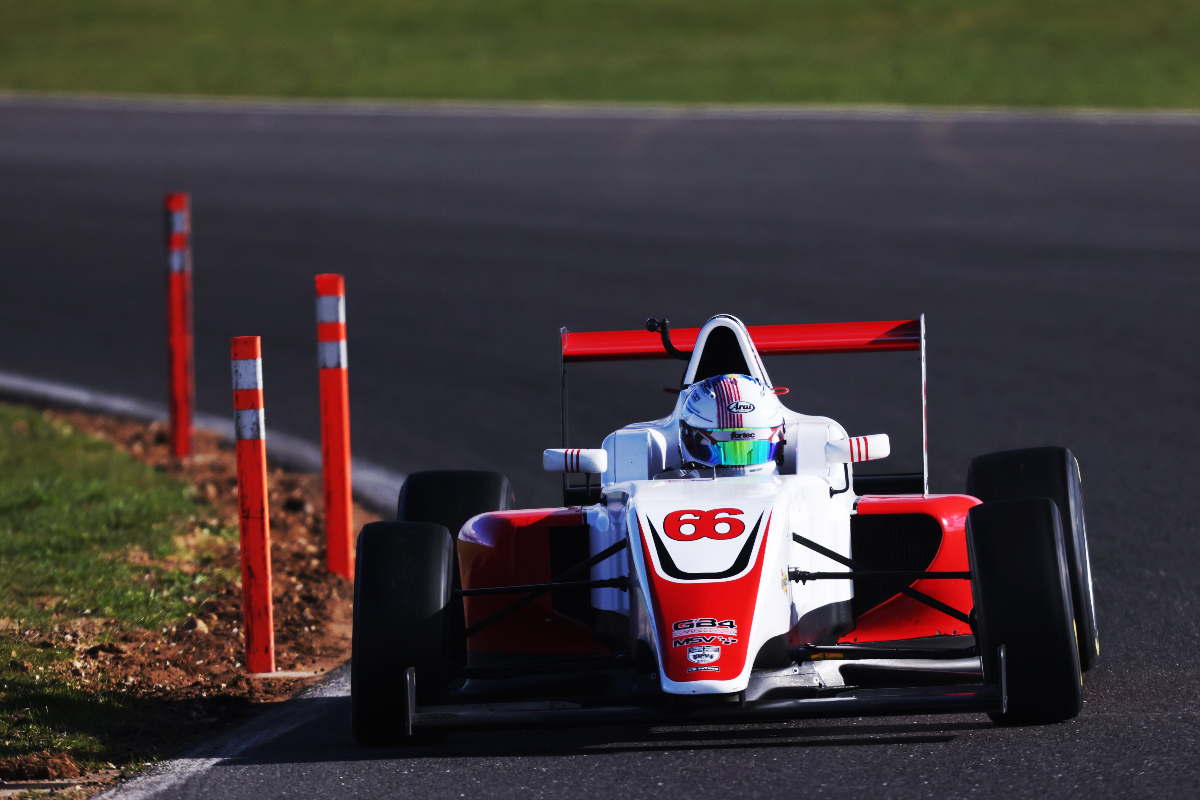 “They know it’s an outside chance and somehow try to raise the funds to do it, trying to get the results that will inspire other around you to help contribute because clearly these drivers don’t have money themselves: it’s parents, it’s friends and families who need to be motivated and believe in the drivers. It’s a precarious path and I’m really pleased.”

A week before the season got underway, it looked like GB4 was on for a grid of eight cars but late signings – including two one-offs at Hillspeed in the form of experienced racers Megan Gilkes and Max Marzorati – boosted the grid to 12.

“[That size] was about what I was expecting to start with,” said Palmer. “I think it’s really important to understand the challenges of starting something from scratch this is not only a completely new championship, but let’s face it, it is at the same performance level as the British F4 championship. So to a degree in terms of pace of the cars it is comparable. Interestingly these cars – I think- are two seconds quicker than the British F4 from last year for the qualifying.”

“And I don’t think the new Gen2 cars are going to be much different in performance so we really are providing with this championship a level of performance of the cars that is outstanding value, and that was always the logic.”

The fastest qualifying lap at Snetterton in British F4’s first-generation Mygale car in 2021 was 1m51.752s, and Fortec Motorsports’ Nikolas Taylor took pole for the first ever GB4 race last weekend with a 1m48.694s lap in Tatuus’s old F4 model. Its halo-shod successor, which replaces the Mygale in British F4 this year, has gone as fast as 1m48.783s in testing.

“It clearly wasn’t going to work having GB3 alongside GB4 at Spa-Francorchamps because that would have heightened the budget massively,” added Palmer on why GB4’s season began on a Classic Sports Car Club-run weekend. 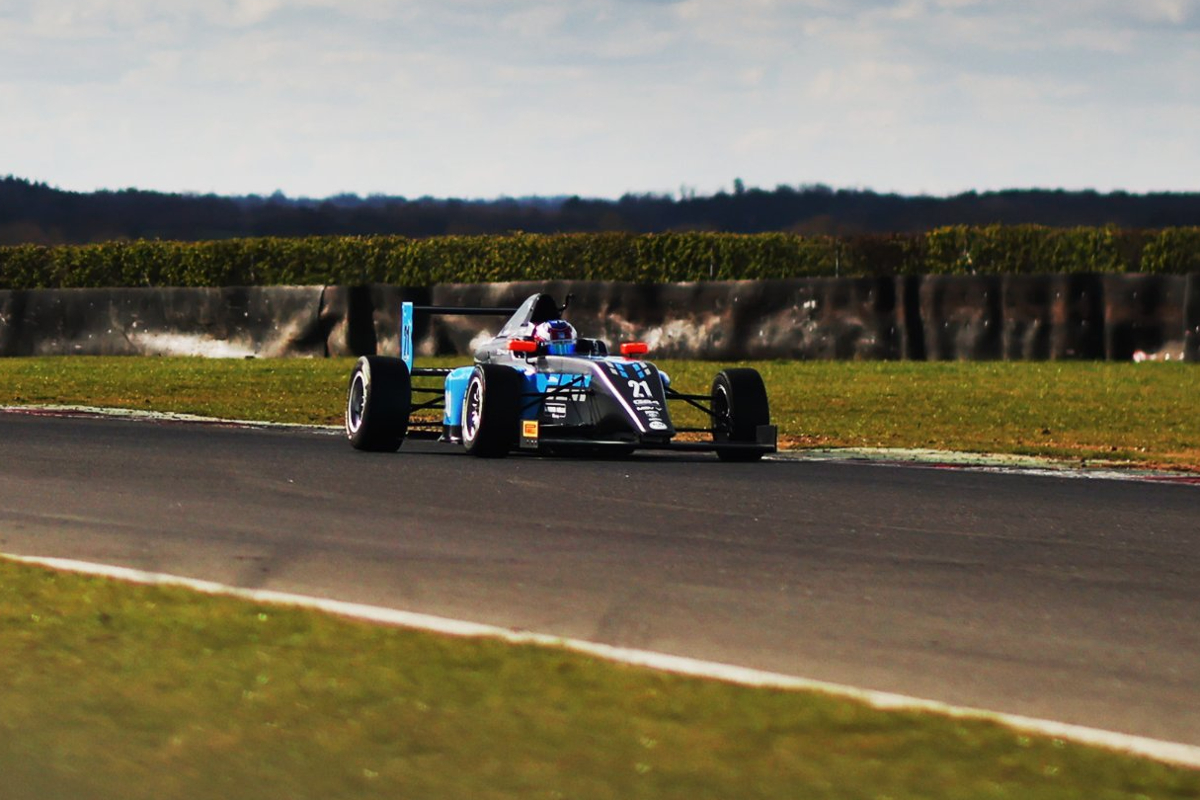 “Yes it’s been quite early so it’s been a bigger challenge to get people here but we’ve got 12 cars, we nearly had 13 [as Hillspeed brought a third chassis to the track].”

Palmer wants GB4’s use of the halo-less Tatuus T-014 to continue for at least a few more years, and make the car rival the longevity of the FR2000 design the company made for Formula Renault 2.0 in 2000 and was used for 10 years.

“Clearly this Tatuus car always was a very good car and it’s clearly got a lot of life in it yet so I’m really excited about the future of the championship.”

One avenue for more teams to join the grid this year is that some drivers will turn fifteen, the minimum age to compete, later in 2022 and so they will be looking to gain seat time before embarking on a full-time campaign in a series in 2023.

Oldfield Motorsport, who have purchased the chassis Dilano vant Hoff won the 2021 Spanish F4 title in from MP Motorsport, as well as Richardson Racing and JHR Developments could be racing in GB4 soon.

Like most F4 series, GB4 has free-to-air live streaming of all its races and that started at Snetterton despite not being part of the British GT and GB3 infrastructure for the weekend.

“When I was starting racing in FFord [in 1978] you trawled through Motorsport News or Autosport to see a little mention and I believe thoroughly that the coverage, particularly now with live streaming coverage, is what is key to these guys,” Palmer said.

“We’re going to have 15-20 minutes of build up with interviews with the drivers and the parents, the sponsors and the team personnel and then after the race two coverage. So I want everyone to get exposure and to be able to be seen around the world whether they come from down the road at Thetford or from Buenos Aires I want the people who are around them and following them to be able to see exactly what they’re doing the whole time and build up the characters not just the actual coverage of the races.” 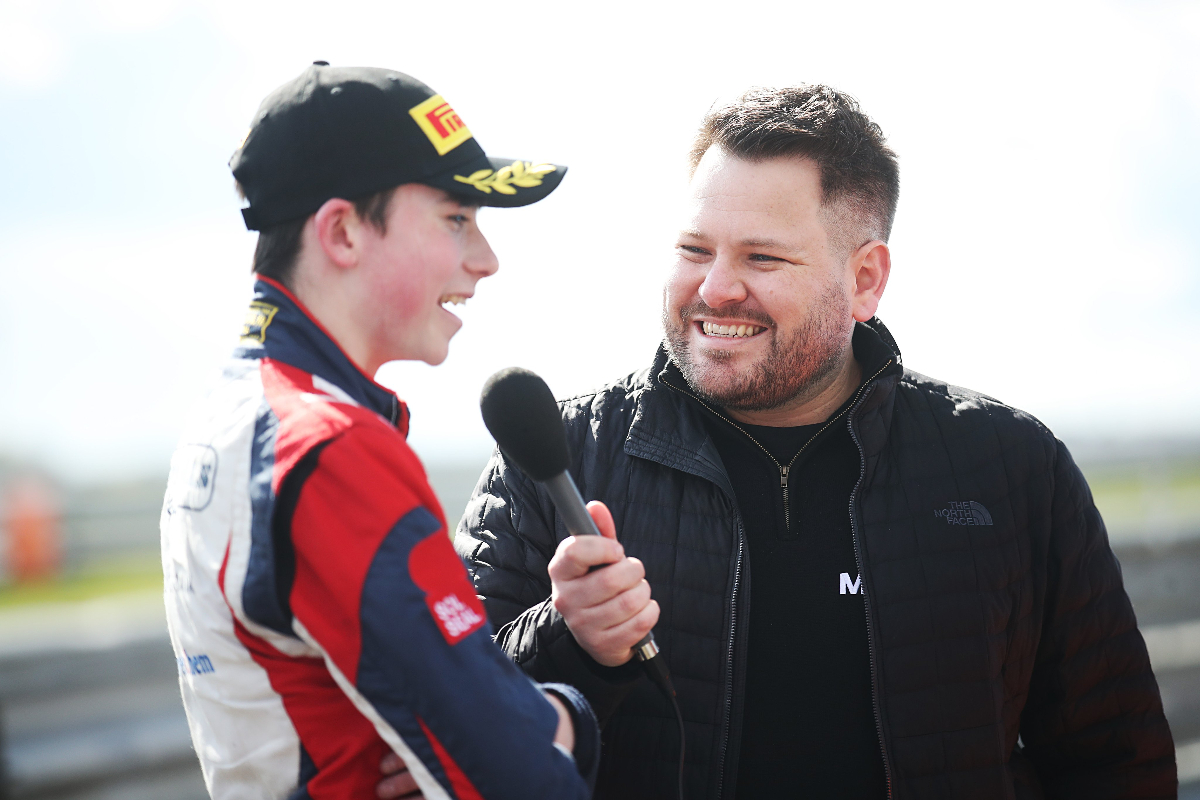 British F4 is following the same strategy of marketising a paddock populated mostly by teenagers, off the back of Formula 2 turning its drivers into more well-known stars with its own F1TV series.

Having now judgded the success of Palmer’s attempt last weekend to continue the life of first-generation F4, it’s now time to look ahead to this weekend where Gruppo Peroni Race is trying to do the same in Italy by reviving Formula Italia.

As the Italian F4 championship also moves to the second-generation Tatuus car, FItalia hopes to attract the smaller teams that still want to run the cheaper, older car. It will have a minimum age of 16, use the T-014 in unchanged form from last year for at least three seasons and has a seven-round schedule that starts at Mugello, goes to the iconic Enna-Pergusa track in Sicily next month and then also visits Misano, Varano and Vallelunga. Like GB4, all of its races will be livestreamed.

The original, wingless FItalia ran through the 1970s as an entry-level series for drivers up to the age of 26. It had several famous champions, and in 1975 Bruno Giacomelli beat fellow future F1 driver Riccardo Patrese to the title.

The third of the first-generation F4 start-ups for 2022 is central Europe’s ACCR F4 series, which is also open to the new T-421. Due to a delay in those cars arriving, it has cancelled its Hungaroring season opener this weekend and replaced it, as previously reported by Formula Scout, with a round at Monza at the end of October.