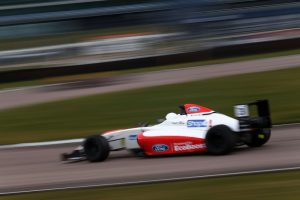 Johnathan Hoggard took a third British Formula 4 win of the season in the reversed grid race at Rockingham, as Kiern Jewiss extended his championship lead.

Fortec Motorsports driver Hoggard started from pole, despite falling behind several drivers on the warm up lap after spinning, with the race defining moment occurring just behind him on the first lap.

JHR Developments’ Ayrton Simmons pulled off a move on the outside of Double R Racing’s Jewiss for third at the Deene hairpin, then cut inside to try to overtake Arden’s Seb Priaulx. The trio made contact, putting Priaulx and Simmons out of the race and handing Jewiss second place.

After an incident a lap later when Jamie Sharp divebombed several drivers and punted Hampus Ericsson off, the race went under safety car conditions. Hoggard made a strong restart, and kept enough of a distance between himself and Jewiss in the final sector of the lap to break the slipstream from the run along the pitstraight and around to Deene in the remaining laps to take victory unchallenged.

Front wing endplate damage from the first lap crash hampered Jewiss’s attack, but it didn’t matter as the 18 points he got for second place means he is now 45 ahead of Simmons.

Jack Doohan completed the podium after pulling off a well executed move on Arden team-mate Dennis Hauger at Deene early on, but came under late pressure from race one winner Patrik Pasma, who took fastest lap in his pursuit of Doohan.

Hauger dropped back in fifth, but with a considerable gap to Double R’s Paavo Tonteri.

The remaining points places were taken by the only other finishers in the race, with JHR Developments pair Manuel Sulaiman and Josh Skelton leading Tonteri’s team-mate Sebastian Alvarez and Fortec’s Lucca Allen.