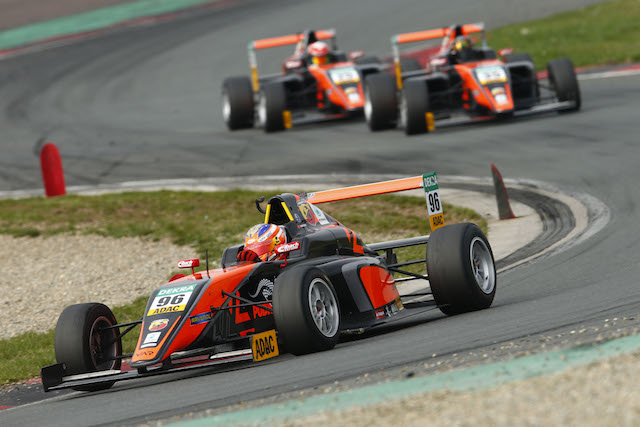 Joey?Mawson will start race one of?the 2016 ADAC Formula 4 season opener?at Oschersleben from the front after taking pole by nearly six tenths from his nearest rival.

Qualifying Group A started on a damp?track, with?title favourite Mick Schumacher leading?the timing boards early on before a red flag was brought out. When the drivers returned?to the track, it was Mawson who took advantage of?the dryer track in his Van Amersfoort car to take pole with a time of 1m26.230s.

By the end of the session, Jannes Fittje was in second place with a time of?1m26:815s, nearly six whole tenths behind Mawson’s pole time. Schumacher ended up third?ahead of top rookie and team mate Juan Manuel Correa and?Mike Ortmann, the three of which being the only drivers?to get under 1:27.000 in that session.

Kami Laliberte finished sixth, followed by?Nicklas Nielsen,?Thomas Preining,?Kevin Kratz and Leonard Hoogenboom rounding out the top 10. The last driver to make it through the cut-off was?Yannik Brandt in 11th, as only the top 11 drivers from each group automatically qualify for the race under the new qualification system.

Group B was much more straight forward, with several drivers in the mix for the fastest time throughout the 20 minute session. US Racing’s?Kim-Luis Schramm eventually won out, with a time of 1m26.543s. Prema driver and rookie to the series Juri Vips took second position with a time four?tenths behind Schramm’s.

With Qualifying Group A setting the faster time, Mawson will start ahead of Schramm, Fittje, Vips, Schumacher and van Uitert.

With the new qualifying system introduced this year, the top 11 drivers in each session automatically qualify for Race 1 and make up the first?22 positions on the grid. Drivers 12th and onwards in each session must take part in a separate Qualifying Race before Race 1. This race does not reward any points for the series, and the finishing position of these drivers will make up the final drivers on the grid for the main races.

Oschersleben allows a total of 35 cars to start on track, meaning the 15 remaining drivers this weekend will battle for the final 13 positions on the grid.