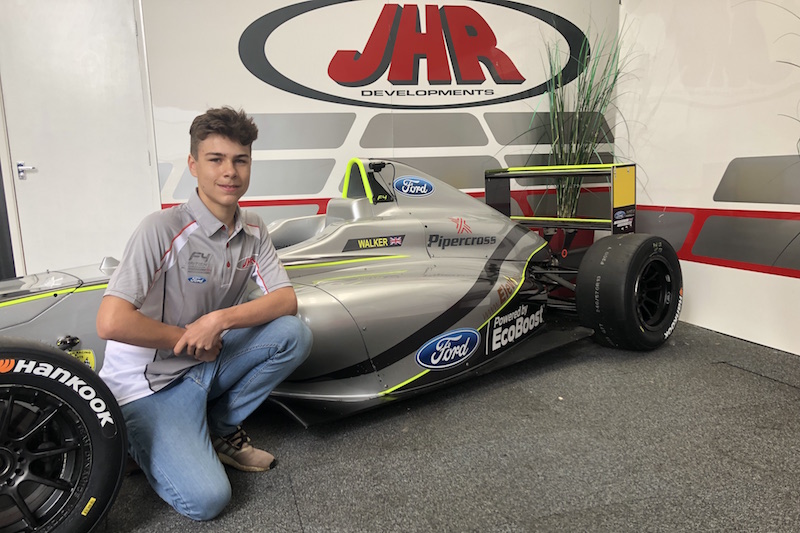 Karting graduate Alex Walker will join JHR Developments for selected rounds of the 2019 British Formula 4 championship ahead of a full campaign next year.

The 15-year-old will race at five of the six remaining rounds, missing the Knockhill event in early September, as he prepares for a championship challenge in 2020.

?Once I drove a race car, I knew I wanted to move up immediately,? said Walker, who was a finalist in last year?s Ginetta Junior Scholarship competition.

?Steven and Jules at JHR, who had run me over the winter in testing and on their simulator, have been brilliant and encouraged me to go straight into British F4.?

After competing for the Ginetta Junior Scholarship, Walker was set to make the step up to the championship with former F1 driver Mark Donnelly?s new team, Apollo Racing, but the squad was forced to drop out of the championship before the start of the season.

?Given I have done very little testing, due to exams, in the F4 car, I have realistic aspirations for 2019 of learning as much as I can before looking for a title shot in 2020,? he continued.

?The Mygale M14-F4 drives much more like a kart does so I think the step up will be easier than other formulas. Likewise, I know some of the drivers from my time in karting, so I hope to be able to show strongly towards the end of the season.

?Given F4 is a global formula with a long history in the UK, the following this well- trodden path feels the best first steps into car racing.

?While I have ambitions beyond F4 in my journey into professional racing, I believe what you can learn in F4 is imperative to the skills that will be needed later in my racing career.?

JHR Developments team principal Steven Hunter added: ?It is going to be great having Alex join us from Oulton Park onwards.

?The purpose of these drives is to get as much knowledge into him as possible for the 2020 season. We?ve done a couple of tests with Alex and ideally he would have liked to have done more racing this year, but he has literally just finished his exams so there?s been no chance to get him on circuit.

?There won?t be any pressure on him whatsoever for the first five rounds that he will be competing in. He?s going to go out, enjoy the experience, learn as much as he can, and be ready for a full season next year.?