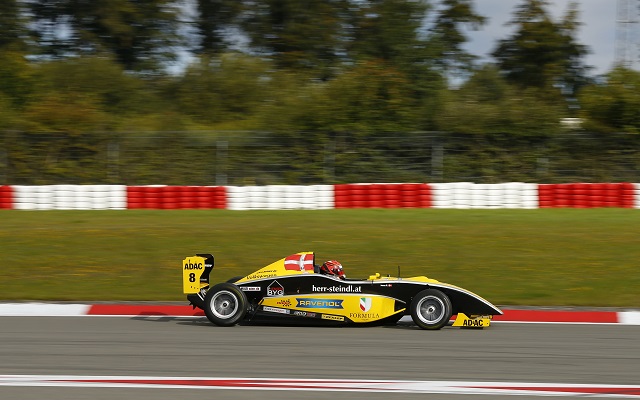 ADAC Formel Masters points leader Mikkel Jensen increased his lead in the standings by winning the first race of the Nurburgring round.

Despite having started from pole, Jensen was made to fight for his sixth victory of the year and only regained the lead midway through the race.

The Dane got a decent start off the line, but was slightly slower than fellow front row starter Joel Eriksson. Jensen then attempted to block the Lotus rookie, but Eriksson kept his foot stuck in and took the inside line into turn one, emerging in the lead.

The Swede managed to keep Jensen at a safe distance over the opening laps, but soon had his rear-view mirrors full of the familiar yellow Neuhauser Racing colours.

Eriksson managed to hold Jensen back for a bit, allowing Mucke’s Marvin Dienst to join the fight for the lead. Both Jensen and Dienst passed the Swede over one lap and went side by side into turn one – and, despite Eriksson lunging from behind and briefly taking the lead back, it was the championship leader who emerged out of the corner first.

From that point on, Jensen capitalised on his superior pace, quickly building up a gap to second-placed Dienst over the second half of the race. The Mucke man, meanwhile, had to defend from Eriksson, who hounded him for the remainder of the race distance.

After 17 laps, the Dane crossed the line first, two and a half seconds ahead of Dienst. Eriksson was less than half a second behind and had to settle for third.

Further back, Tim Zimmermann and Dennis Marschall put on a fine fight for fourth place. Zimmermann overtook his fellow rookie with ten minutes remaining on the clock, but then couldn’t pull away, allowing the Lotus driver to constantly remain behind him until the checkered flag. Eventually, the two crossed the finish line less than 0.2s apart – with Zimmermann ahead of Marschall.

Fabian Schiller, who set the pace in practice, took sixth, while championship contender Maximilian Gunther settled for a lowly seventh. Gunther had been as high as third early on in the race, but tumbled down the order during the subsequent laps.

Kim-Luis Schramm took eighth, ahead of Igor Walilko and Luis-Enrique Breuer, who recovered after a trip to the gravel during the opening lap.