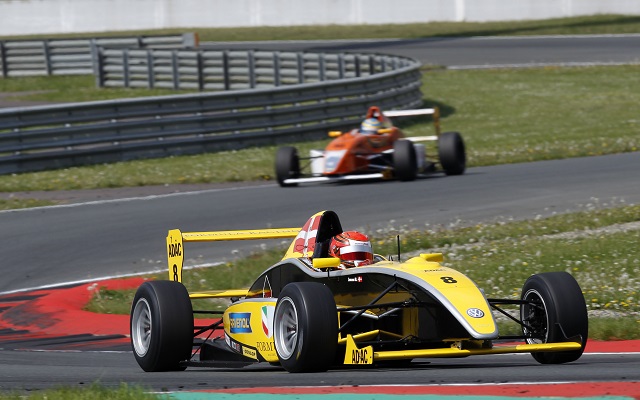 Danish driver?Mikkel Jensen scored his first pole position of his ADAC Formel Masters career, edging out?Maximilian Gunther for the race one pole in a thrilling qualifying session this morning at Oschersleben.

The German took the lead early on and built up an advantage, only to be pipped by the Dane with less than ten minutes remaining on the clock. The pair would continue to trade fastest laps, with Jensen eventually getting the better of the German, as Gunther also had some of his top efforts disallowed due to track limits issues.

Kim-Luis Schramm kept the pair honest early on, but would eventually have to settle for third, just ahead of Mucke teammate?Marvin Dienst.?Tim Zimmermann came home in fifth for Neuhauser Racing to be the highest-placed rookie, just ahead of Lotus’?Dennis Marschall.

Fabian Schiller would eventually come in seventh after leading the session early. Fellow sophomore?Ralph Boschung took eighth ahead of Joel Eriksson, with?Philip Hamprecht round out the top ten.

The grid for race two on Sunday will see the top two trade places with Gunther on pole from Jensen.