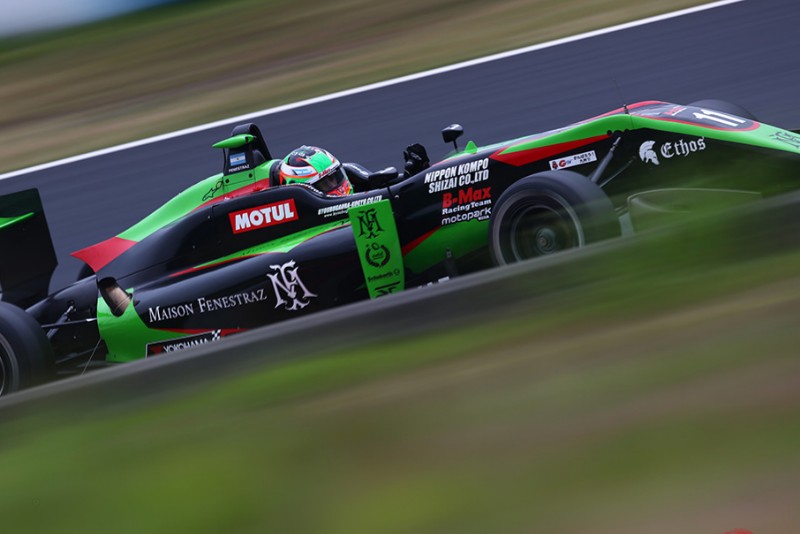 Sacha Fenestraz extended his Japanese Formula 3 points lead at Okayama, where he was one of three winners alongside Ritomo Miyata and Yoshiaki Katayama.

The former Renault Formula 1 junior took pole position for race one and two through qualifying on Saturday morning, but lost the lead of the first race at the start to B-MAX Racing with Motopark team-mate Enaam Ahmed, who had jumped the start from fifth on the grid.

After Ahmed served a drive-through penalty, Fenestraz created a gap to Okayama Team’s Katayama and TOM’S driver Miyata behind, who were battling for second place.

He eventually took the chequered flag 13.858 seconds ahead of Katayama to win his fourth Japanese F3 race in a row. However it was Miyata who snatched the point for fastest lap in third.

Miyata bettered Fenestraz at the start of race two, while Katayama was able to do the same in the final race of the weekend.

In both races Fenestraz was able to stay close to the lead driver, although in race two there was a safety car period after a collision between Ahmed and Hiroki Otsu meant that Otsu’s car needed to be retrieved.

With two second places and the fastest lap in both race two and three, Fenestraz was able to extend his championship lead to 30 points.

Miyata moved up into second in the standings after finishing third in the final race.

Sena Sakaguchi grabbed a podium finish in race two, making a championship return with TOM’S in place of Kazuko Kotaka. He finished ahead of Katayama, who moved up to fourth in the standings thanks to his race three win.

Katayama’s team-mate Charles Milesi picked up his best results of the season after finishing fourth once and fifth twice, while Toshiki Oyu – who was second in the standings coming to Okayama – finished sixth in all three races.