Jamin cruises to win USF2000 race one at Mid-Ohio 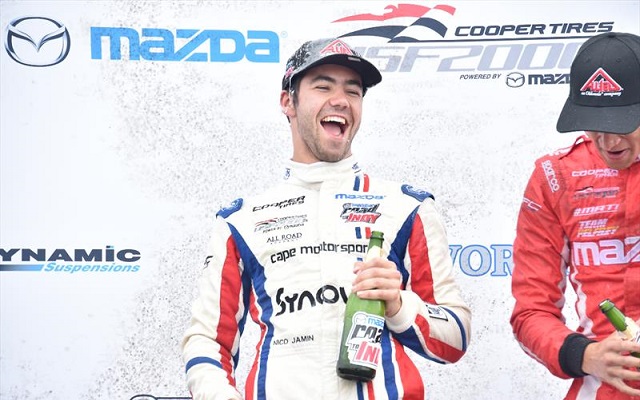 Nico Jamin comfortably won the first race at Mid-Ohio to collect his sixth USF2000 victory of the season.

Moreover, this is the Frenchman’s seventh consecutive top two finish which increases his championship lead to 27 points.

Starting from pole, Jamin kept the lead with Anthony Martin jumping into second thanks to a storming start, sneaking past Aaron Telitz and Jake Eidson, the latter losing two positions at the start.

The race soon went under caution following an incident between Luke Gabin and Garth Rickards.

Gabin was going side-by-side in an attempt to overtake the American but lost control on the kerbs and touched Rickards’ car. As a result, the Team Pelfrey driver ended up in the wall.

Following the restart, Jamin started to pull away from Martin and saw the checkered flag with a gap of six seconds.

Martin, on the other hand, was unable to lose the American duo behind him. However, they did not take any risks and they finished in an unchanged order of Martin, Telitz and Eidson.

Parker Thompson took fifth with another pair, Yufeng Luo and Gabin spending the race close behind him.

Keyvan Andres Soori ended up eighth, while Sennan Fielding and Ayla Agren were battling it out for ninth, the British rookie eventually keeping the Norwegian at bay.