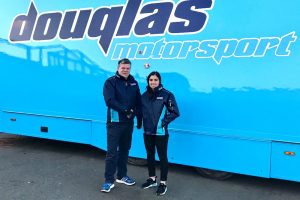 Jamie Chadwick will move from Double R Racing to Douglas Motorsport for her second year in BRDC British Formula 3.

She finished her first season in single-seaters in ninth, with one podium to her name, and also contested the Walter Hayes Trophy, which she is set to return to this year.

“It was always my wish to complete a second year in British F3, and I am delighted to be teaming up with Douglas Motorsport for this year?s campaign,” said Chadwick.

“I have a great team behind me, so I?m looking forward to hitting the ground running at Oulton Park and starting our title attack.?

?After following Jamie?s progress through the junior formulas, including winning British GT4, it is a pleasure to have her join the team,” said team principal Wayne Douglas.

“This week we start an intensive test programme and intend to be fully up to speed and running at the front for the first round at Oulton Park.?

Chadwick is likely to make cameo appearances on the Mazda Road to Indy ladder this year, having recently tested USF2000 machinery with Benik, and intends to also race sportscars at the Nurburgring in the VLN endurance series.