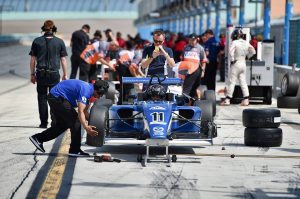 USF2000 team DEForce Racing will move up a rung on the Mazda Road to Indy ladder this year, with Formula Ford Festival winner James Raven leading their line-up.

The team managed two top five finishes, which it will hope to improve on as it contests a second season in the championship alongside its first in Pro Mazda.

Raven, winner of the 2014 Formula Ford Festival, will lead the team’s Pro Mazda line-up, with Colin Kaminsky joining Enders and Sierra in this year’s USF2000 squad.

The Pro Mazda drive will mark the first occasion since he entered single-seaters in 2012 that Raven has contested a championship outside of FF1600, where he has had considerable success.

The Englishman finished second in the BRSCC National championship in 2014, and ended the year by going one better in the Festival.

He finished third in the same championship in 2016, and spent almost a year out of racing before returning in the Walter Hayes Trophy last year, where he also finished third.

Enders already has experience of Pro Mazda, having made a single appearance in the National Class in 2016. He finished ninth in USF2000 last year, and also contested the Toyota Racing Series and several NACAM and US Formula 4 races.

Sierra is a former Mexican karting champion, and has spent most of his car racing career in France, where he has raced in the country’s F4 series. He’s also a two-time runner-up in the NACAM F4 standings, and got a fourth in his USF2000 cameo at Toronto last year.

Kaminsky finished 18th in his 2017 part-season in USF2000, which was split between Kaminsky Racing and John Cummiskey Racing. He previously raced in spec sportcars on the SSCA National Championship Runoffs roster.