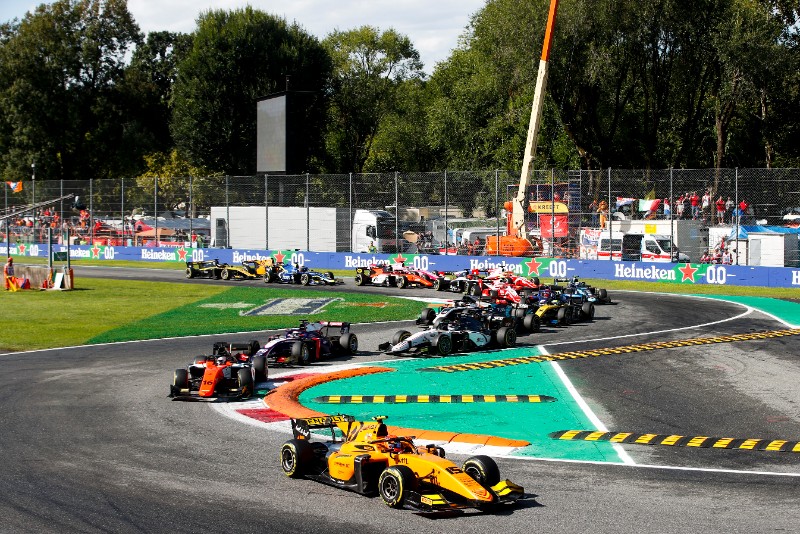 Jack Aitken clinched his third Formula 2 win of the season after a great battle in the Monza sprint race.

The Campos Racing driver made a strong start from the reversed grid pole and created a small gap to second in the opening laps before MP Motorsport’s Jordan King started to catch up.

King took the lead on lap seven of 21, before the virtual safety car was deployed to clear DAMS’ stranded Sergio Sette Camara. Aitken then timed the restart brilliantly to retake the lead going into the first chicane on lap nine.

There were five cars in contention for the win during the latter stages of the race, with Aitken leading Sauber junior Callum Ilott, King, championship leader Nyck De Vries and feature race winner Nobuharu Matsushita.

After protests on the radio from King, Aitken was shown the black and white flag for weaving on the main straight, just as the lead battle became a straight fight between himself and Ilott in the last few laps.

Ilott put himself in position to try to overtake into the first chicane on the final lap but a lockup resulted him going off the track and spinning, shredding one of his tyres.

Renault junior Aitken stayed out of trouble to pick up victory and keep himself firmly in title contention, with King finishing in second.

Carlin’s Matsushita was battling with King for second on the road, but had a five-second time penalty from earlier in the race for a VSC infringement. He met the chequered flag in third, but was demoted to fifth behind ART Grand Prix’s de Vries and Virtuosi Racing’s Guanyu Zhou.

Zhou had started the race from the 17th on the grid in after he was given a three-place penalty for causing a collision in the feature race.

Mick Schumacher came home in sixth for Prema after starting the race in 14th, with Trident’s Giuliano Alesi taking a second points finish in a row in seventh. Matsushita’s team-mate Louis Deletraz picked up the final point, ahead of Nikita Mazepin (ART) and title contender Nicholas Latifi (DAMS).

De Vries, who went straight on at the first chicane on one lap after a huge lock-up, is now 59 points clear of Latifi at the top of the standings.

Despite a destroyed tyre, Ilott kept his car on track to take the chequered flag in 12th.