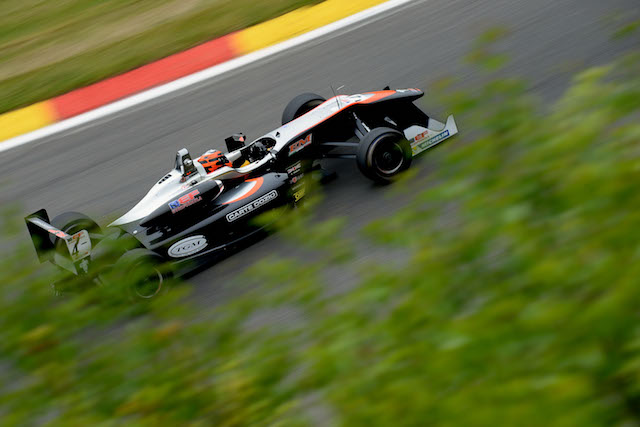 Jack Aitken scored his second win from three races in Euroformula Open in the opening encounter at Spa-Francorchamps.

The Renault Sport Academy driver had briefly dropped to fourth into Les Combes on the first lap, only to repass RP Motorsport team-mate?Tanart Sathienthirakul around the outside of the left-hander.

Ahead,?Ferdinand Habsburg?had got ahead of polesitter?Leonardo Pulcini into La Source, before Pulcini swept back into the lead down the Kemmel Straight.

A lap later, the RP drivers would pass Habsburg for second and third into Les Combes just before a safety car intervention for two separate incidents.

One, unseen by the cameras, left?Nikita Zlobin upside down but unharmed at the top of Raidillon, and in the other,?Antoni Ptak was squeezed between?Colton Herta?and?Igor Walilko into Les Combes, sending him spinning with suspension damage.

At the restart, Aitken got a run on Pulcini and was ahead by the start of the Kemmel Straight, but that?allowed Pulcini to slipstream his way back past come?Les Combes. Aitken however then repeated his move on Sathienthirakul around the outside of the left-hander to snatch?the lead.

Pulcini reclaimed the initiative?a lap later, only for Aitken to get it back after a further tour.?From there, the Briton – who won race two at the opening round at Estoril – was able to pull away, winning by 4.745 seconds.

Having retaken third from Sathienthirakul into the final chicane, Habsburg challenged Pulcini again at the end, but went deep at?Les Combes on the final lap and had?to settle for third, just holding off Sathienthirakul.

Damiano Fioravanti beat Herta and Walilko, while?Diego Menchaca took eighth after having to start from the pits rather than third on the grid.?