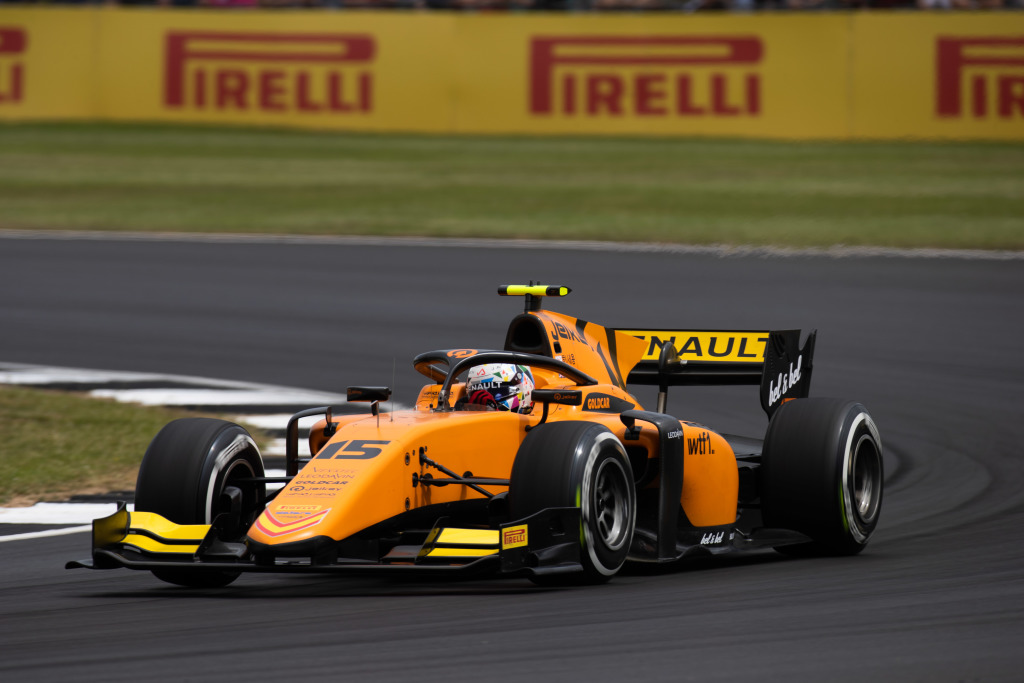 Jack Aitken scored a home win in the Formula 2 sprint race at Silverstone with a bold pass on Louis Deletraz with less than five laps to go.

Renault Formula 1 tester Aitken made a great start from fourth on the grid to get on the tail of Deletraz, who took the lead from second on the grid as reversed-grid pole-sitter Callum Ilott slumped to fourth.

Championship leader Nyck de Vries snatched second away from Aitken a few turns later on the outside into Brooklands, as Deletraz built a one-second gap.

That advantage was soon eliminated by a safety car after Giuliano Alesi was turned around at Luffield by Arjun Maini, who got another penalty following his similar incident with Nikita Mazepin at the end of the feature race.

While Deletraz pulled away again at the restart, Aitken looked for a way past de Vries and opportunistically dived down the inside at the Loop on lap seven. De Vries got back alongside on the run to Brooklands, but Aitken held on around the outside.

Their fighting allowed Deletraz to move over two seconds clear, where the gap remained until Aitken started to push on lap 11 of 21.

Half a second behind heading onto lap 17, Aitken caught Deletraz down the Wellington Straight and immediately dived down the inside at Brooklands to snatch the lead.

Aitken set another fastest lap on the penultimate tour as he won by almost five seconds for his second victory of the year with Campos Racing.

After being passed by Aitken, de Vries fell immediately into the clutches of Ilott but held off the Briton to complete the podium.

His nearest rival Nicholas Latifi took fifth, despite being passed by feature race winner Luca Ghiotto around the outside of Stowe on lap 14.

Ghiotto later slowed and pitted with a left-rear puncture, dropping him to 15th.

From 11th on the grid, Mick Schumacher battled Latifi and finished sixth, holding off Nobuharu Matsushita, who faded after leaping up to sixth on lap one. He beat Guanyu Zhou to the final point in eighth.