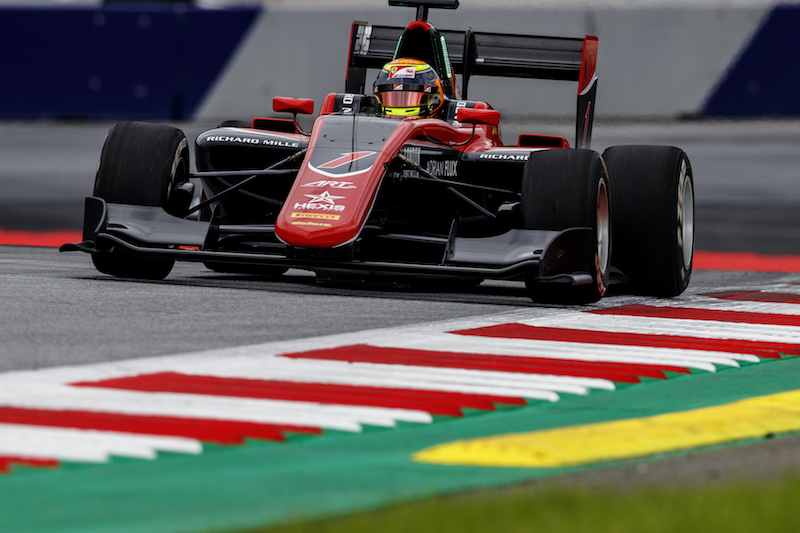 Callum Ilott scored his first GP3 pole position in qualifying at the Red Bull Ring, as team-mate and championship leader Anthoine Hubert is set to start race one from the back row after stopping on track.

Hubert ground to a halt between Turns 6 and 7 with less than three minutes of the session remaining, and was already down in 19th on the times after running very wide at the final corner a few minutes earlier.

His stopped car led to a red flag, and race control took the decision not to restart the session.

That handed pole to Ilott, after the Ferrari academy member had a narrow edge over the opposition for the majority of the running.

He led Leonardo Pulcini by 0.077 seconds in the middle of the session after managing a run of several fast laps, with degradation low on the soft tyres.

With five minutes to go, he took nearly a quarter of a second out of his time, only to see Nikita Mazepin and then Jake Hughes better it.

Ilott responded however, beating Hughes by 0.037s to take back top spot before the session was ended.

Both British drivers improved considerably on their qualifying efforts at Barcelona and Paul Ricard, where Ilott qualified fourth and seventh and Hughes 11th and 12th.

Alessio Lorandi was another to vastly improve to take third, 0.067s off pole for Trident.

Pulcini ended up fourth for Campos, just ahead of Mazepin, while Pedro Piquet edged out last week’s pole-man Dorian Boccolacci for sixth, recovering from an off at Turn 4.

Joey Mawson and Niko Kari sat fourth and fifth in the middle of the session but were shuffled back to 13th and 16th respectively.

The gap between Ilott and debutant Devlin DeFrancesco in 20th and last was less than a second, with Hubert – who has a 14-point advantage over nearest challenger Mazepin – 0.794s adrift.