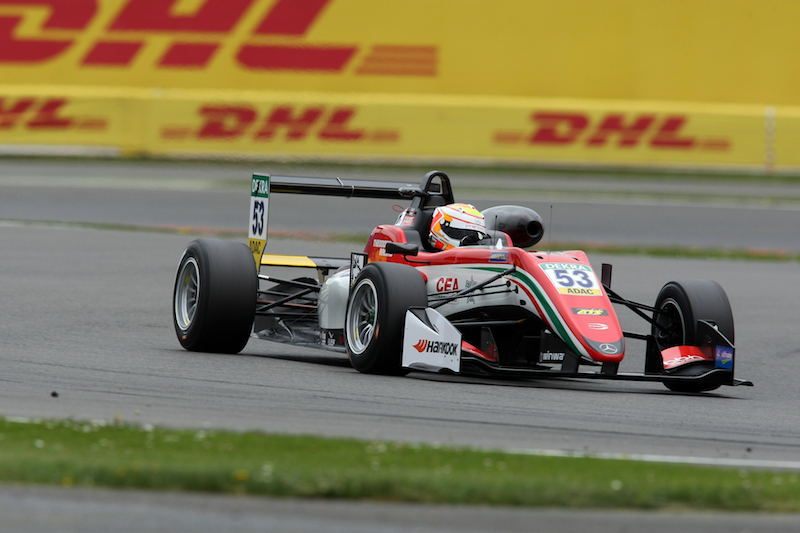 Callum Ilott fought back against Lando Norris to grab pole for both races two and three of the Formula 3 European Championship opener at Silverstone.

Ilott, who was pipped to top spot by rookie Norris by only 0.006 seconds in Thursday?s first qualifying session, took the top spot away from the Carlin driver with four minutes remaining with a time of 1m50.482s that would not be beaten.

As the clock wound down, Norris had set two times ? his best 0.025s slower than Ilott?s ? that were within 0.005s of each other and therefore looked set to take race three pole courtesy of his second-best time.

Ilott, who told Formula Scout that it took?time to get his tyres up to temperature after having to find a good track position, didn?t appear to be well-placed on second-best times until posting a 1m50.503s with a minute left to secure the double pole.

Norris felt?a change of wind direction from Thursday contributed to him not extracting the best from the session, telling Formula Scout: “Although I was still P2 I was fairly disappointed with how I did. There was a lot more potential in it; I could have had another P1, but a first and two seconds is?still pretty good so I’m happy.”

Joel Eriksson will start third for both races, getting ahead of Maximilian Gunther, who had outpaced him in the first session.

Jake Hughes claimed fifth with his final lap having planned changes to his Hitech-run Dallara following a disappointing 11th in qualifying one.

Force India-backed rookie Jehan Daruvala backed up fifth in the first session with sixth in the second, and will be ahead of Hughes for race three.

Category returnee Jake Dennis will have to make do with a place on the fourth row for all three races. He?ll be seventh and ahead of Guan Yu Zhou for race two, but behind the Chinese Ferrari protege for race three.

Mick Schumacher had a more competitive showing and ended up ninth, with European debutant Tadasuke Makino rounding out the top 10 again. As with the drivers on the two rows ahead, this pair will also swap places on the race three grid.

As in the first session, debutant Joey Mawson was the fastest Van Amersfoort Racing driver, this time in 11th with team-mates Pedro Piquet and Harrison Newey on row eight and David Beckmann continuing a tough weekend, taking 18th of the 19 drivers for both races.