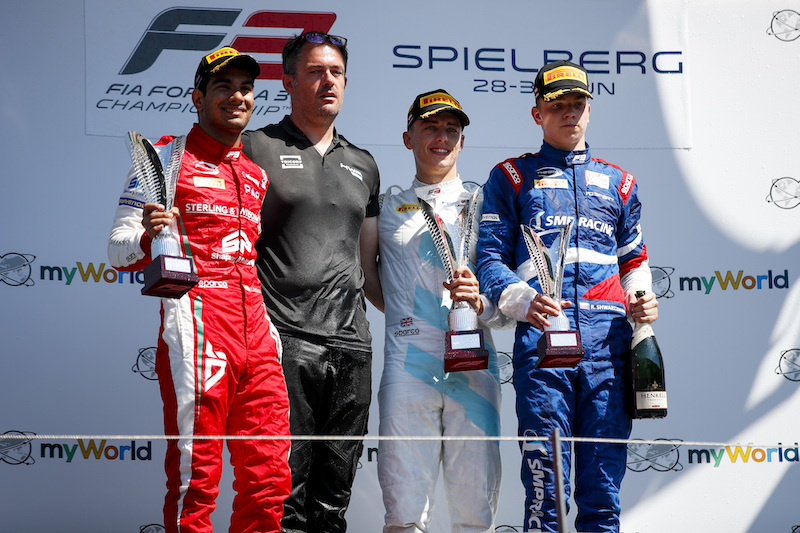 Jake Hughes picked up the win in the second FIA Formula 3 race at the Red Bull Ring after Robert Shwartzman was penalised for a last-lap clash with his Prema team-mate Marcus Armstrong.

Following a late virtual safety car period, Armstrong edged ahead of Shwartzman heading into Turn 3 for the last time, but contact was then made between the Kiwi’s right-rear tyre and the Russian’s front wing.

While Armstrong went straight on into the run-off and dropped to 19th with a puncture, Shwartzman managed to hold on to beat Hughes to the finish line by 0.1 seconds and seemingly take his third win from as many FIA F3 rounds.

He was immediately given a five-second penalty however that dropped him to third and gave Hughes victory, the first for HWA as an F3 entrant.

The third Prema driver Jehan Daruvala inherited second by just a tenth of a second over Shwartzman.

Hughes had briefly led the race on the opening lap from second on the grid, passing pole-sitter Lirim Zendeli into Turn 1 before the Sauber junior driver fought back into Turn 3.

From sixth on the grid, Armstrong then challenged Zendeli on the outside into Turn 4 before slotting into third, only for Shwartzman to pass him on lap three of 24.

Zendeli then had to defend from Shwartzman into Turn 3 on the next lap, sending both drivers wide and opening the door for Hughes.

Shwartzman claimed the lead on lap five, while Armstrong moved up to second a couple of tours later, before setting the fastest lap and cutting Shwartzman’s lead to seventh tenths.

The first of two virtual safety car periods, for an incident involving Yifei Ye and Bent Viscaal, presented Armstrong with a chance to go side-by-side with Shwartzman at the restart.

With five laps to go, Armstrong took the lead into Turn 3, only for Shwartzman to cut back on the run to Turn 4. That sequence was replicated a lap later, just before Alex Peroni collected his Campos team-mate Sebasitan Fernandez to trigger the second virtual safety car.

Daruvala had to pass Max Fewtrell late on to make the podium, with Fewtrell missing out on Shwartzman’s third by just 0.2 seconds.

From ninth on the grid, Leonardo Pulcini took his best result of a tough campaign so far in fifth. He led Hitech team-mate and race one winner Juri Vips, who went?from eighth to fifth on the first lap before dropping back to 10th and recovering.

Zendeli finished up seventh with Niko Kari taking the final point ahead of Devlin DeFrancesco and David Beckmann. Having been as high as fifth from 10th on the grid, Richard Verschoor slumped back to 12th.