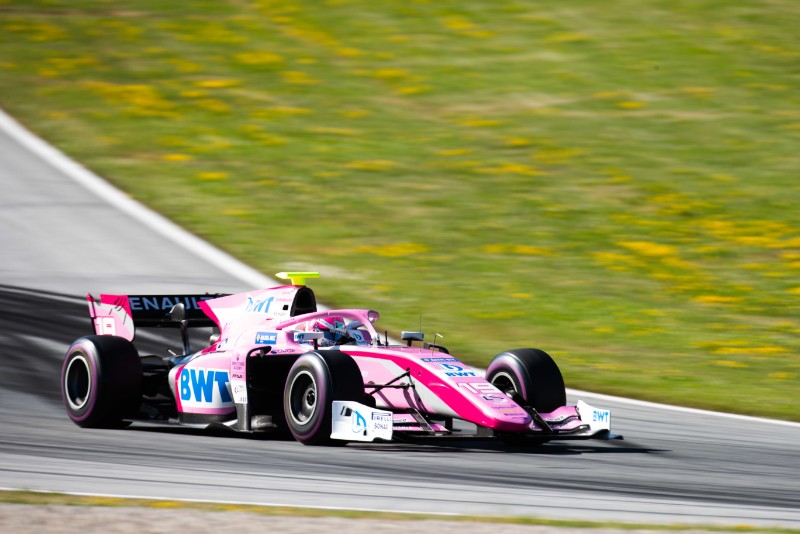 Arden?s Anthoine Hubert was surprised to qualify second for Saturday?s Formula 2 feature race at the Red Bull Ring, after a qualifying tyre gamble.

Hubert ? who won the most recent F2 race at Paul Ricard ? did his second run in qualifying in the middle of the session, in an attempt to avoid getting into traffic around the short and fast 4.318km circuit.

After returning to the pits he expected to see himself tumble down the order, but ended up retaining second place and earning the best qualifying result of his rookie campaign so far.

?The first run was already really good, I was P4, and we decided to go in the middle of the session to avoid the traffic so that was a really good strategy,? said the reigning GP3 champion.

?Thanks to my engineer for this and the car was really good, so I improved my lap time on the second set ? went to P2, and then went out of the car and watched the other drivers driving.

“That was a quite stressful moment ? maybe the most nervous moment of the session.?

?I didn?t expect to be staying in P2, to be honest. Everyone improved but not enough, so I stay P2 and I am really happy about this result.?

Hubert pointed out that qualifying and pitstops were aspects he and Arden has been working on since the start of the season.

His previous best qualifying result this season had been eighth in Monaco. After finishing the feature race in that position and earning sprint race pole, he converted it into his first win.

?We know qualifying is where we need to work based on past events. We have been building since the beginning of the season and it?s quite nice to see that it seems to be working.

?Free practice was not easy to be honest; my target was maybe to be in the top 10? I won the two last sprint races, so my goal [now] is to do better in the feature races.

“It?s good to win races but I prefer to be fighting for the win or podiums in race one, and I knew there were two points we needed to improve which are qualifying and pitstops.

“Hopefully we have improved the pitstops so we can get a good [result] tomorrow as well.?