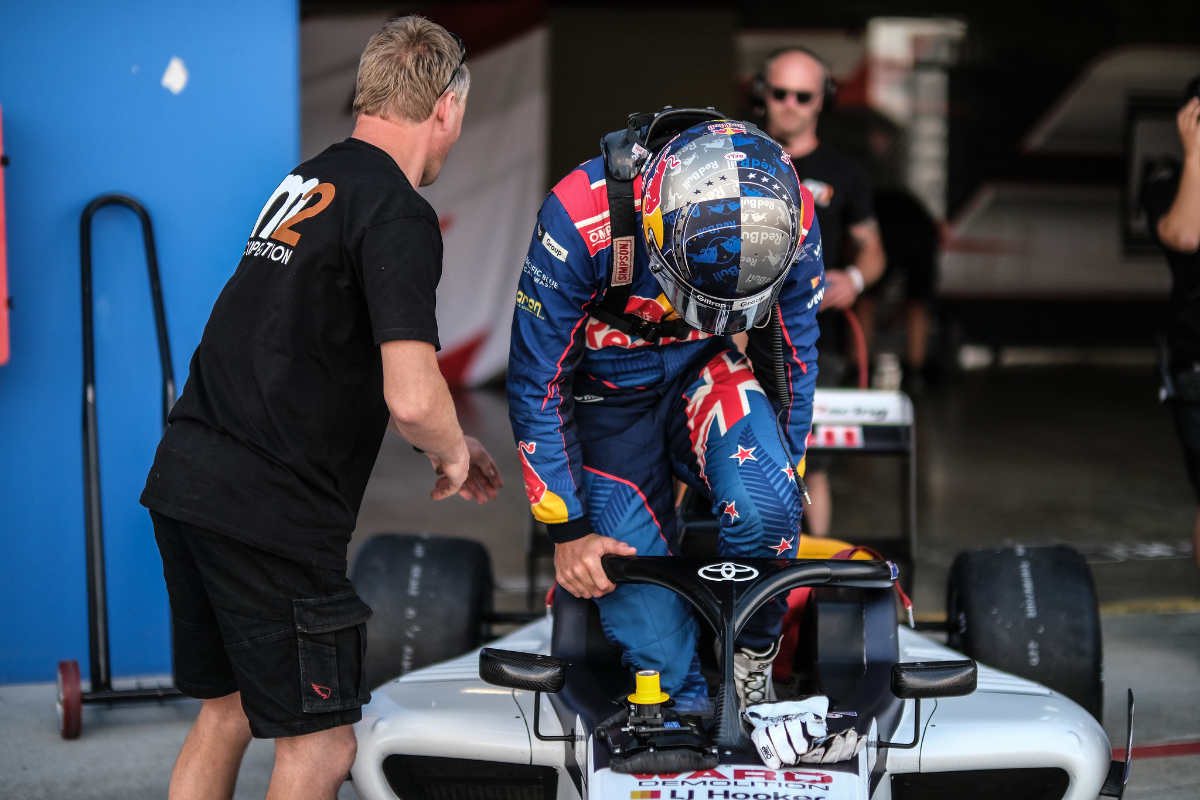 Shane van Gisbergen had a perfect Toyota Racing Series return at Hampton Downs, including winning the New Zealand Grand Prix, but at over six feet tall it wasn’t an easy return to single-seater racing

Red Bull-backed Australian Supercars champion Shane van Gisbergen raced in the Toyota Racing Series towards the start of his car racing career, finishing as title runner-up in the 2006-07 season with two wins.

He, and several other stars of New Zealand motorsport, returned to the series this weekend to contest an all-star edition of the New Zealand Grand Prix as international drivers were unable to compete.

Van Gisbergen got to test the Regional Formula 3-spec Tatuus FT-60 in the weeks before the season opener on Hampton Downs’ International layout, but had one persistent issue.

“Firstly, trying to fit in it the last few days,” van Gisbergen said in the pre-event press conference. “I did the test last week, but then my rideheight – my helmet was too high – so I had to shuffle and sink down.

“The car, to say it nicely, is poorly designed. The steering is super close and you’re driving with your wrists.”

The length of van Gisbergen’s arms meant he had them folded in quite significantly while driving, and his wrists were doing more of the physical steering work. But driving a 645bhp tin-top as a day job, in addition to being adept at turning cars around gravel sweeps in rallies or pulling high G-forces through fast corners while racing sportscars meant the physicality of being back in a single-seater wasn’t going to slow him down at all.

“It’s really hard to drive. We’ve all had some problems with that, and trying to get used to it. Some of us have slower racks [designed for use in W Series to change the required steering inputs], so it’s a bit nicer. 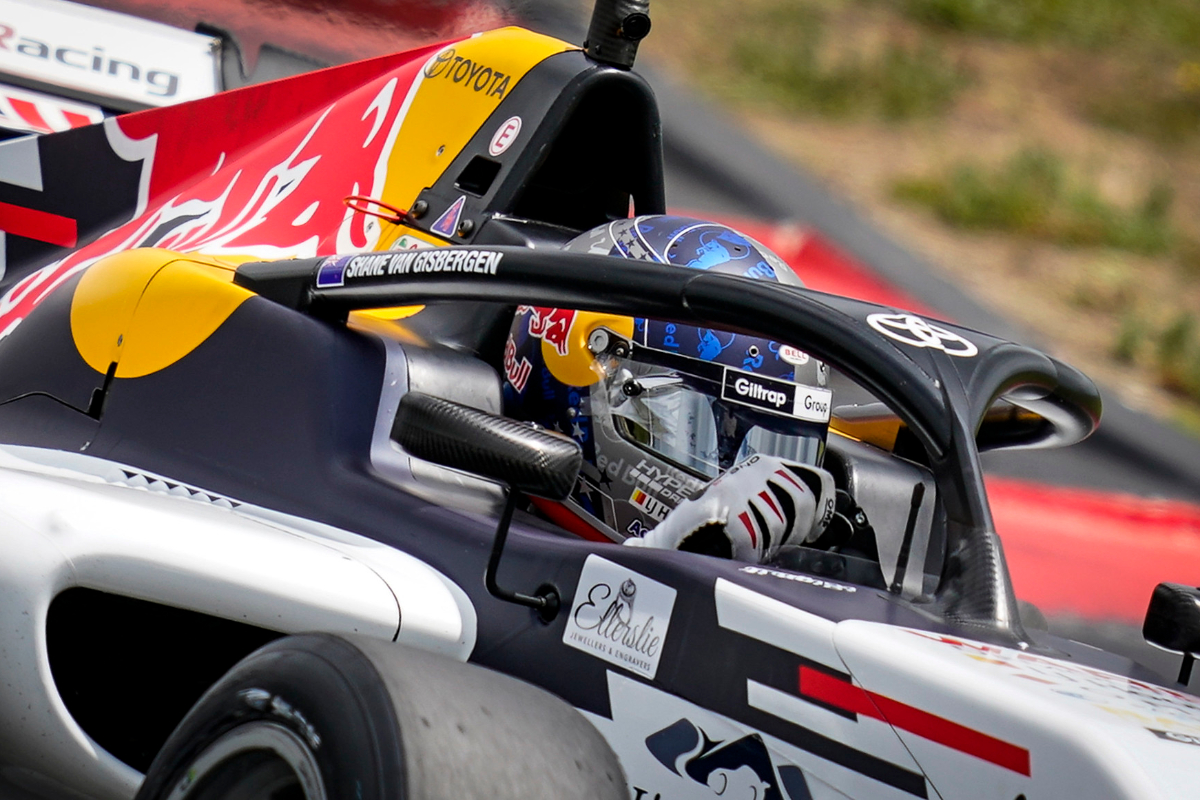 “It’s very different. I had to learn to left-foot brake, which is quite different. I’ve never done that before in a race car.”

Van Gisbergen also downplayed his competitivity, despite arguably being the form man going into the weekend – against even the single-seater regulars – after a 2020 that included his first rally win and victory in Supercars’ prestigious Bathurst 1000.

“Just here to have fun. First thing was making sure I’m comfortable, then comfortable to push the car, but how I go? Don’t know, don’t care, If I come first or fifth, it won’t change my life.

“But put on a good show and a good result. It’s cool to be here, racing with a lot of friends, a lot of young kids.

“Obviously we want to be up front, but it would be awesome to see some of the young kids kick our arses as well because there’s been a lull for the last couple of years, and it would be good to see the young kids being so strong coming through.”

Van Gisbergen more than put on a good show, which started in qualifying when he took pole for his single-seater return.

That put him in first place on the grid for race two of the weekend, with the second-fastest times setting the race one grid and resulting in Superleague Formula race-winner Chris van der Drift taking pole ahead of van Gisbergen.

Top TRS team M2 Competition was running van Gisbergen’s car, and the revived Tasman Motorsports Group operation adorned the livery of van der Drift’s, but there were no true team rivalries as data was being shared across the pitlane.

He hounded van der Drift at first in race one, but made a move for the lead that stuck and then fended off the three-time Porsche Carrera Cup Asia champion for the remainder of the action.

Next up in their wheel-to-wheel battling was qualifying for the grand prix itself, and van Gisbergen spent much of that session side-by-side with van der Drift as they searched for grip in rainy conditions. While van der Drift was able to qualify third, van Gisbergen only managed to put himself 10th on the grid. 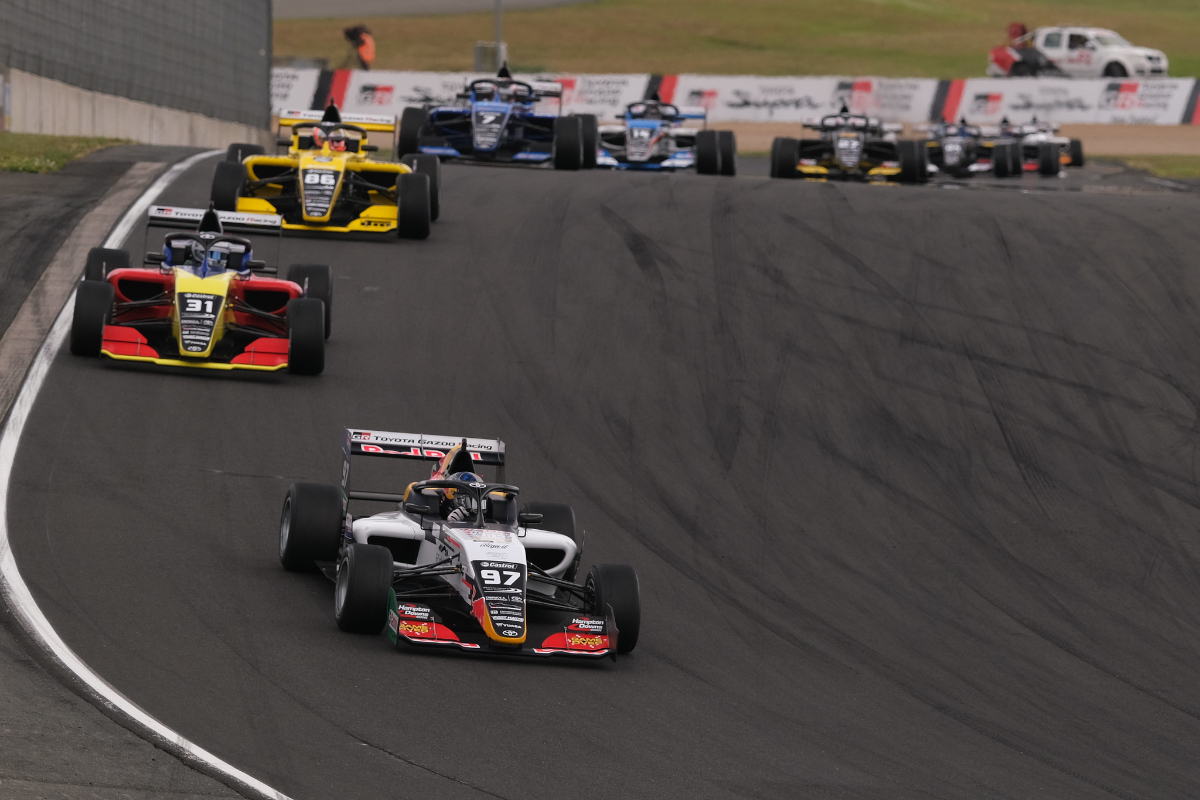 The safety car was called out twice in race two, which van Gisbergen ended up leading from start to finish ahead of van der Drift. Was their rivalry going to continue into the grand prix, where they were starting seven places apart?

As he was getting into his car in the pits pre-race, “some numpty went to start the car and pushed the fire extinguisher button” according to van Gisbergen.

In folding his frame into the car, van Gisbergen had accidentally emptied the contents of the compulsory on-board fire extinguisher, and it had to be replaced before he was allowed to head to the grid.

“There was a bit of a panic, that was my fault. I thought it was all over,” the 31-year-old added.

He didn’t make it to pit exit in time to line up on the grid once his replacement extinguisher had been fitted, meaning rather than starting 10th, he would now be taking the start of the race from the pitlane. Victory seemed very distant.

But van Gisbergen showed his class once he was allowed back onto the track, carving his way through the field and benefitting from just one pack-bunching safety car interruption in the lengthened 28-lap race to take the lead a few laps from home and become the winner of the 66th edition of the prestigious race.

“The car was awesome, perfect safety car and then I don’t know how the front wing is still on the car, I had to rough up a few guys. That was unreal, unreal,” van Gisbergen beamed after claiming his unlikely victory.

“The prep we’ve put in with [M2 Competition’s Mark] Pilch, and [series manager] Nico Caillol helping me get used to the car, the boys all weekend the car’s been faultless at M2. 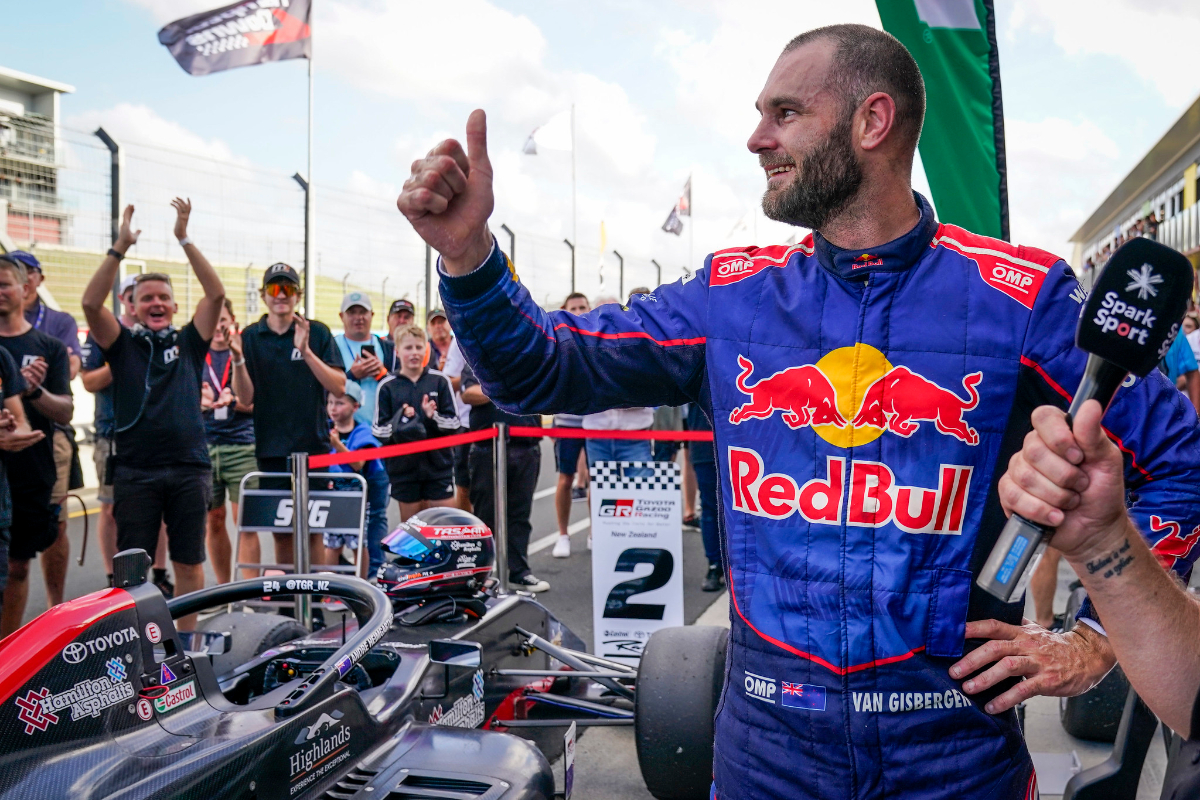 “It’s been an awesome weekend, and I’m pretty speechless. That was, I thought that was going to be hard from 10th let alone the pitlane.”

New Zealand motorsport icon Kenny Smith, who made history by entering the grand prix for the 50th time in his career at the astonishing age of 79 and finishing a lapped 15th, perfectly described van Gisbergen’s performance:

“He got his shit together and he came through. That was a fantastic drive to come through the field.”

“The grand prix, pretty cool to win that,” van Gisbergen summed up while receiving his trophy on the grand prix podium.

“It was awesome racing all these guys, all my friends, and then also seeing Kenny out there as well. About five to go I gave him a little wave as I went through. Pretty special to share the track with him, and to do his 50th grand prix is awesome.

“Still speechless. That was awesome.”

It was awesome to watch too, and makes you wonder what a driver who has proven to be among the best in the world with a roof over his head – now in a rally car as well as in Supercars and sportscars – could have done had his career kept him in single-seaters a little longer.