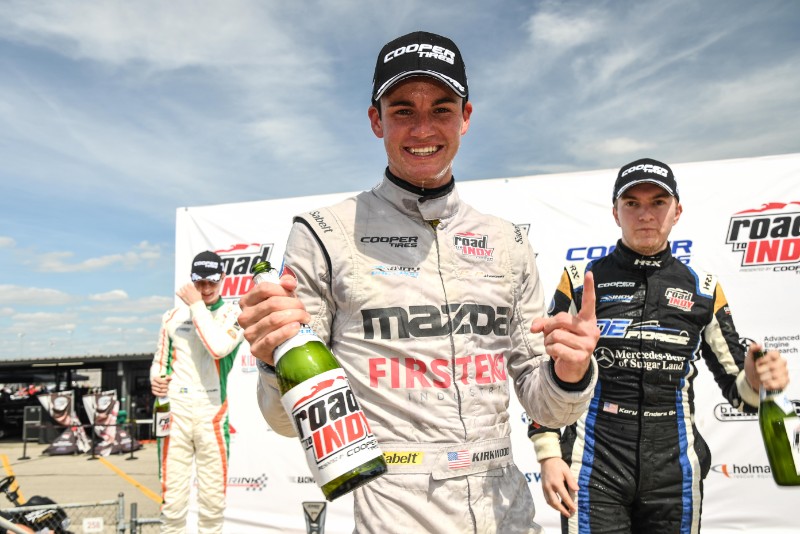 Kyle Kirkwood has won 20 of the 30 races he’s entered on the Road to Indy, and been champion of four different categories in three years. Has it been as easy as it’s looked for the driver targeting F1 and IndyCar?

Since winning his first ever race in F1600 Championship Series back in 2015, there has been an inevitability about the rise of Kirkwood. He did take two years to dominate United States Formula 4, but has been near unstoppable since.

Cape Motorsports, the team that ran him to F4 glory, snapped him up for USF2000 in 2018 and the combination was only beaten twice across the whole season. The only driver able to truly challenge was Indy Lights race-winner Alexandre Baron.

At the same time he contested the inaugural season of Formula 3 Americas, where he was similarly as dominant, albeit against minimal competition. Despite minimal crossover with the RTI calendar, Kirkwood credited racing in both championships as aiding “track experience” and the latter for adapting to “driving heavier cars”.

“Cars are getting heavier as I move forward, and F3 had some relevance for braking and understanding how to get back on the throttle and load the tyre differently compared to a car that?s far more nimble and light,” Kirkwood tells Formula Scout.

The light car he refers to is Euroformula Open’s Dallara F317, which Kirkwood raced at Monza with RP Motorsport. Despite being based in Italy and only in its second season of American racing, the team ran Kirkwood to Indy Pro 2000 domination.

“[The EF Open cameo] has been the plan since the beginning of the season. It was part of the contract from IP2000. I did zero testing. We went and shook down the car on Wednesday, so everything?s very new. 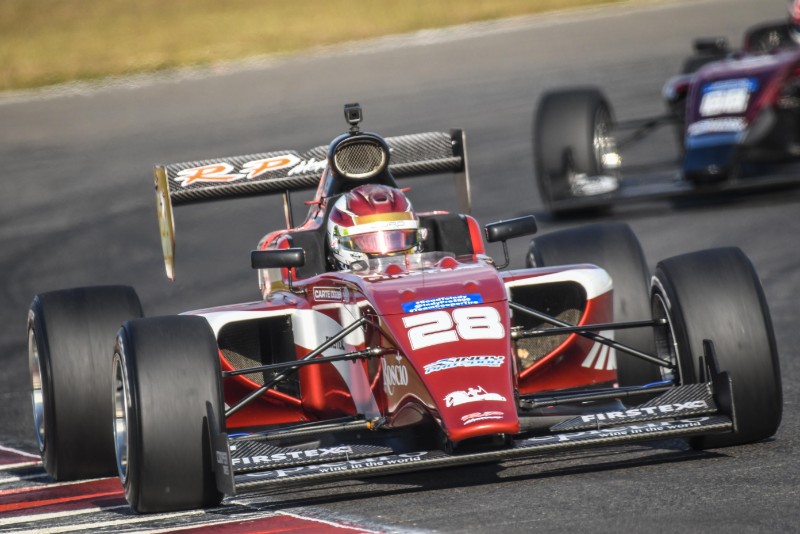 “RP were actually a lot better than their results in IP2000 last year. They proved to be very fast at multiple places, they won a race and they had many unfortunate encounters. I saw that, and my options were the team that won – for a higher budget – and with RP, which had very high potential. I saw more potential in RP than the team that won the 2018 title, because they had so much experience, and the rate of RP?s progression was incredible. That showed this year as well.”

It took six races for the partnership to become the force to beat, with Kirkwood then winning nine of the remaining 11 races.

“My EF Open engineer Carlo Sterrantino was my engineer for one or two of the races, including some testing over in America. My [usual] engineer is not here this weekend, from America, but it?s all the same. Everyone flies over prior to the weekend, nobody stays there, the cars stay with another team over in America.

“At St. Petersburg [season opener] we struggled with the car, we weren?t perfect there but we should have got two second places. We should have swept Indianapolis, we were so much quicker than everybody in the races – like three or four tenths quicker – we just didn?t pull it together for qualifying. And a penalty and a broken wing hindered us from winning both races.

“We struggled at Lucas Oil Raceway oval, but from there on out we were extremely strong minus a couple wrecks or a couple bad qualifyings.

“The ovals are strange. Most people don?t understand how technical they are. Especially in Europe, they think you?re just doing a couple of left turns. And that was my philosophy going into it: it?s two left turns, it?s almost flat everywhere, it?s easy. 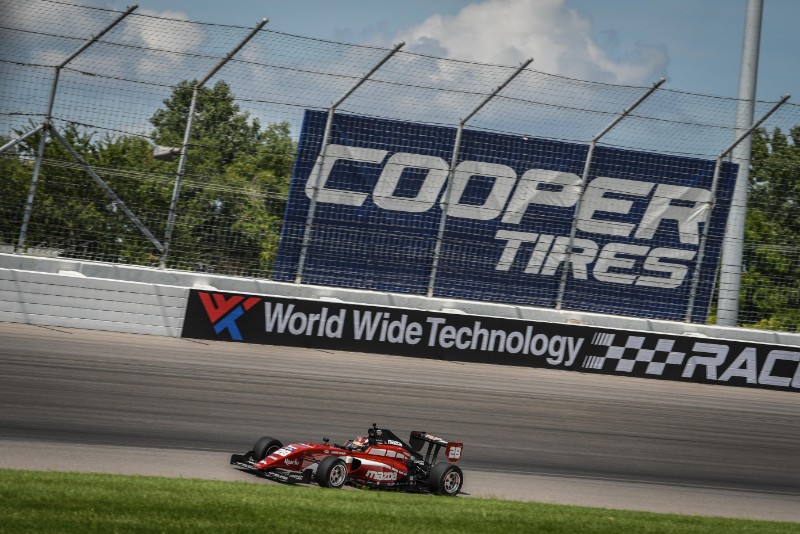 “But there?s a lot with set-up. The car is all set-up, it?s not necessarily driver [only]. Of course it?s essential to have a [good] driver, but if you take two comparable drivers and go with two different set-ups, one is going to be miles quicker than the other. I like that essentially, because I?m very analytical for data and trying to get the best out of the car. I enjoy the ovals in that sense, but it’s a strange sensation because I?ve only done three in my entire 17-year career from karting into cars.”

Kirkwood dominated at LOR in USF2000, but with an inexperienced team could manage no better than fourth in IP2000.

“I didn?t really enjoy LOR. It?s strange because it?s very bumpy and you have to run a high line. It?s almost impossible to pass, especially with a downforce car. So it?s not relevant, I think, to anything else that I will be doing in my future on ovals.

“My strongest track is Mid-Ohio. For mostly the reason that I actually genuinely enjoy driving that track, especially the high speed corners there. For some reason it?s just a close place to my heart. I?ve obviously been very successful there in the past years, and it?s a track that I have the most experience at between F1600, F4, F3, USF2000 and IP2000. That track has the most grip out of all the circuits that we go to too – I think that?s why it?s more enjoyable for me than the other ones.”

Mid-Ohio was where Kirkwood scored his first F4 win, took his only weekend grand slam of all wins, poles and fastest laps in F3, won his USF2000 title and was where he truly launched his IP2000 title attack.

With a scholarship prize from winning the IP2000 title, Kirkwood is set to visit the track again in Indy Lights next year. His EF Open cameo acted in part as preparation for the next step on the Road to Indy. 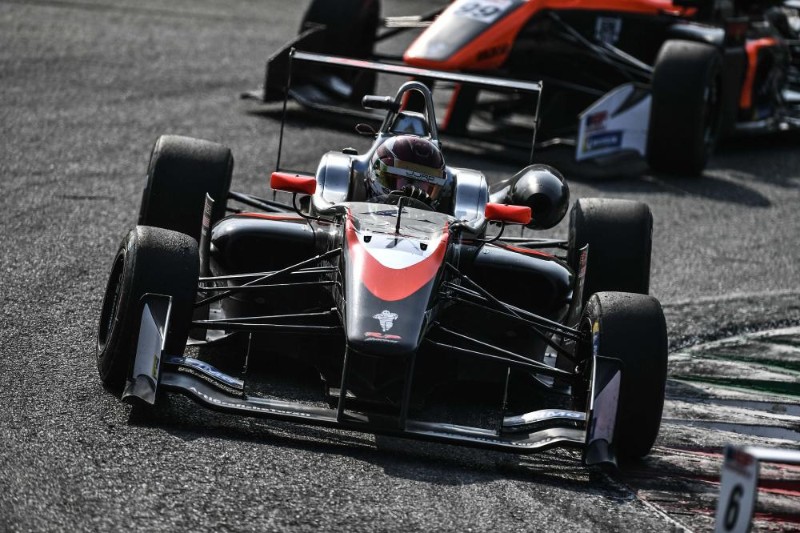 “IP2000 has similar downforce to the F317, especially around Monza because we?re such low downforce, but when I shook down the car a couple of days ago at a smaller circuit in Italy, we had a high-downforce package and it?s a bit more. And going into Indy Lights it?s a Dallara. Even though the car looks completely different, it?s a Dallara so I?m sure they?ll be some resemblance to that car.

“[Europe] is much different to America. The atmosphere is a lot to grasp because most teams in America don?t have big hospitality like the teams here. There?s not so many fans that come to the smaller events, so it?s actually quite nice, and it?s the first time that I?ve ever raced out of the garages. There?s a lot of things I enjoy about this.

“The car is incredible to drive, a lot of downforce. Relatively low power, but the downforce is what makes the car so great with the grip level and braking capabilities.”

Kirkwood finished ninth and sixth in his two EF Open races, matching the team’s best result from a tricky season.

“Since I was really young, F1 has always been my goal. Since I?ve been running in American series, I think American series is now the goal. But there?s always – I mean anyone in karting is going to want to go towards F1 if they have the opportunity to. If I have opportunities over here, of course I?m going to pursue them. It is very enjoyable, and you learn quicker here than you do in the US. I think that?s proven for a few drivers that have come from the US to here.

“Anything I can take from here and bring back to the US, if I end up running IndyCar, will be very, very valuable.” 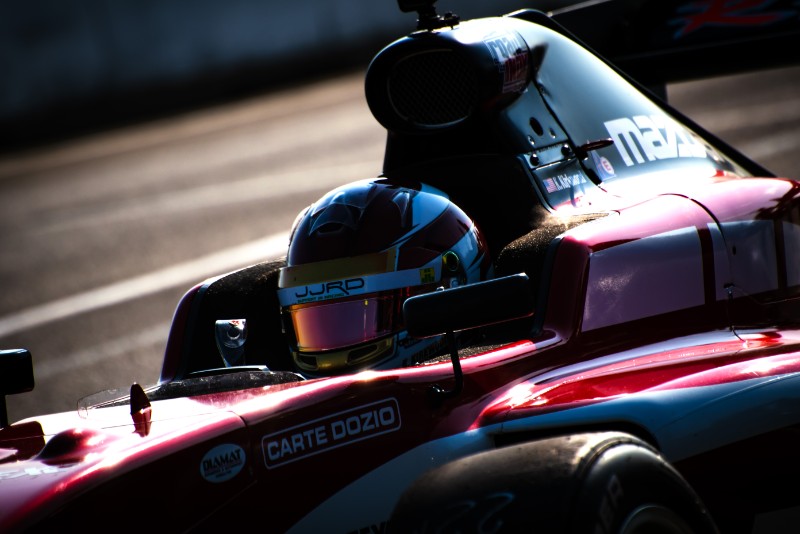 Kirkwood is already in communication with multiple IndyCar teams, and his interest in also targeting F1 has given teams added impetus “to push me towards IndyCar in the following years”.?

“If I did have [a F1 deal in the future], I think it definitely would be an incentive for an IndyCar team to pursue keeping me there. That goes for anybody. If Josef Newgarden or Scott Dixon got a test with Mercedes or Ferrari etc., then I think their IndyCar teams might be crossing their fingers trying to keep them. That?s something I?m sure IndyCar teams don?t wanna see, but they?re also fans of racing themselves and they want to see their drivers perform and do well throughout their career.”

“For learning the basics, F1600 was really good. For learning racecraft, Formula Ford 1600 at the Walter Hayes Trophy and FFord Festival with Team USA in 2016 was huge for me. I learned a lot there. That?s really where I got my car career started.

“I would consider a WHT return. I haven?t talked to Oliver [Askew, fellow Team USA scholar and Indy Lights champion] about this – we?re actually really close because he lives two or three miles from my house – but I?ve talked to Scott Speed. We want to get into something slow that you can really beat up on and race hard with, versus these very high dollar cars that we’re in.”

Askew too is keen on a FF1600 return, where he last raced Kirkwood. He’s been a category up on the RTI ladder on his friend ever since, and has run a similar winning path to IndyCar. The title scholarships have proved crucial in both’s careers, and you have to ponder the ‘what if?’ of them having battled on the journey up, and the levels they could have pushed each other to. 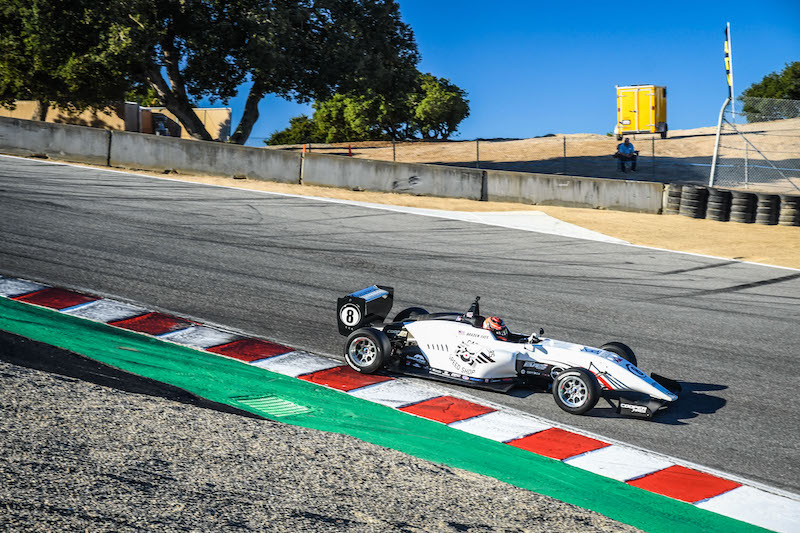 The 2019 USF2000 season was one of two halves, which met in a dramatic Laguna Seca season finale.

Cape Motorsports’ Braden Eves, in the chassis that had previously dominated in the hands of Askew and Kirkwood, won the first four races and ended the first half of the season at Road America with a fifth win.

It was there where Mazda Road to Indy Shootout winner Hunter McElrea took his first victory for Pabst Racing, and in the second half of the season became the form man. He was dominant at Portland, won at Mid-Ohio and beat Eves to the podium in Toronto, enough to be points leader heading to Laguna Seca.

Eves beat McElrea to race one pole at Laguna Seca, but both had no answer to Jay Howard Driver Development’s Christian Rasmussen when it came to the race itself. McElrea and team-mate Colin Kaminsky then shuffled Eves to fourth, extending McElrea’s points lead.

He failed to set a lap in qualifying for the title decider though, while Eves qualified third and quickly took the lead in the race. Chaos enabled McElrea to rise to eighth, while Eves came under pressure from Rasmussen. The positions up front didn’t swap, and McElrea finished seventh. He conceded the title by five points, the joint smallest margin in series history.