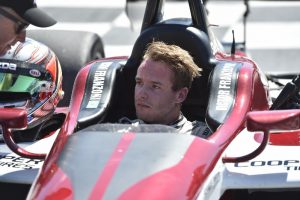 In the week preceding this year’s Mazda Road to Indy races at Road America, it was announced that 2017 Pro Mazda competitor Jeff Green had died from injuries sustained in a crash in a F5000 car at Canadian Tires Motorsport Park. This news had an especially significant and profound effect on the MRTI paddock as not only had Green been been a racer, but also integral to the success of one of the paddock’s biggest stars: Victor Franzoni.

Franzoni stepped up to Indy Lights this year with Juncos Racing as the reigning Pro Mazda champion, a title he won with Green as his team-mate. Were it not for the support of Mazda Motorsport, Juncos Racing and Green in particular, it would’ve been nigh impossible that Franzoni would be sitting in a racing car this year or in victory lane at Road America.

Pro Mazda title rival Anthony Martin missed out on the US$790,300 scholarship to Indy Lights, and hasn’t been seen in a racing car since. Only twice did the pair not finish 1-2, with the worst result being a fourth for Martin. Just 18 points split them, and the closeness between the pair was also how close Franzoni’s racing career came to ending after 2017.

Green had encouraged and helped finance the signing of Franzoni to Juncos for 2017 after the Brazilian missed out on the US$325,000 USF2000 scholarship to Martin. A friendship was immediately struck, not surprising given Green had requested Franzoni as his team-mate and made the deal happen, and the pair mentored each other throughout the season.

Despite being 60 years old, Green impressed to finish eighth in the standings with the assistance of his team-mate.?Two top-five finishes were the highlights, one at the Gateway oval and another at Road America. 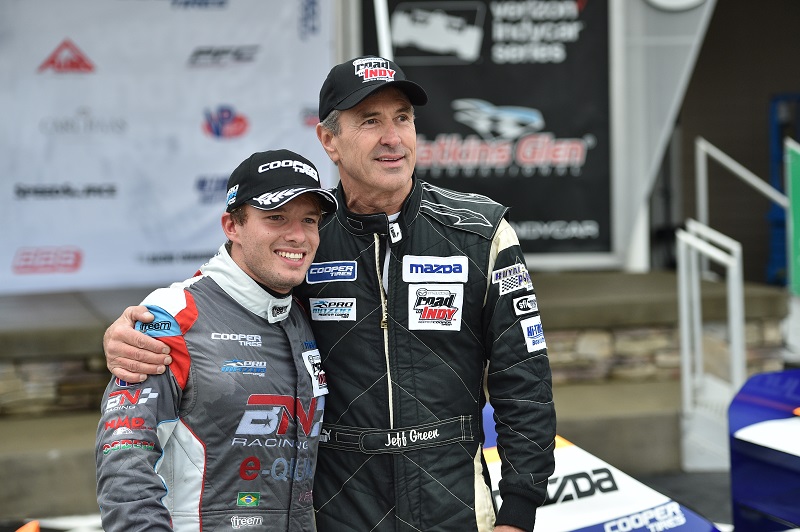 With a already depleted 2017 Pro Mazda field lacking the budget to progress to the next level, several Indy Lights drivers earning IndyCar seats and many others running dry, Franzoni has found himself in an Indy Lights field that has averaged less than eight cars.

This has made the stakes higher. Of the seven drivers that have been present at every round, only two have suffered retirements, and that still earned them points.?Franzoni is well aware of this, and has seen Andretti?s Colton Herta and Patricio O’Ward rack up the points at the top of the standings; three-quarters of Herta?s points lead over O?Ward was earned from his race-ending crash in the second St. Petersburg race.

Franzoni started the season on the back foot, as the generous financial package Mazda provided to ensure him a spot on the grid did not cover testing. Green stepped in again, ensuring Franzoni’s appearance at the two-day pre-season open test.

Without a scholarship from Mazda to remain in Indy Lights for a second season in 2019 if he doesn’t win the title, Franzoni has spent this year driving for his career.

He qualified fifth on his St. Petersburg debut, the best rookie in the field, and finished fourth twice.?Another distant fourth place in the opening Barber race was an example of Franzoni?s inexperience, as he was unable to work the tyres and car as well as the likes of O?Ward, Herta and Santiago Urrutia.

The second race took place in changing conditions, and Franzoni showcased his talent with a well-deserved second place. It was a breakthrough result, and lessened the pressure on the Brazilian, but the rain masked the fact that he was still not at one with the car. 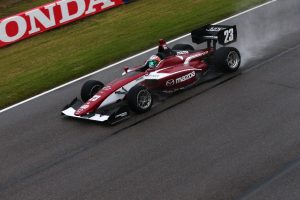 A messy weekend on the Indianapolis road course did bring a fortunate second podium, but two high profile errors left?him with sixth from the first race.?

The Freedom 100 also contained difficulties, and definitely a race where Franzoni suffered from the lack of a team-mate for his first appearance on the IMS oval.?This was evident when the pressure in one of his tyres became dangerously low in the race, perhaps as a result of set-up choice, and Franzoni had to pit from the lead to finish a lapped last.

Franzoni had the full support of the team, but the gap to first had grown to 40 points. Hard work on both sides and some impressive performances had yet to produce a victory, and the pressure was mounting back up.

Road America would be his greatest challenge, not only due to the loss of close friend Green, but with the circuit marking the halfway point of the season and proving to be the most punishing on the tyres yet. If Franzoni hadn’t made a breakthrough with the car and taken victory here, he would’ve had a big weight on his shoulders for the rest of the year.

From an emotional perspective, Franzoni had to honour Green with a result fitting of his contribution to his career. From a financial perspective, that career was now bereft of Green?s altruism, and results meant more than ever. Going into the second half of the season winless would make the title an ever steeper task, and an incomplete understanding of the car and tyres would be a poor advertisement of Franzoni?s abilities for a 2019 seat. Everything rode on last weekend. 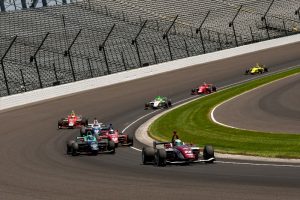 Having already topped the pre-event test, it wasn’t surprising to see Franzoni to take his first pole in qualifying.

The opening race was a different matter. Franzoni held off Herta for the first few laps, but after conceding the lead was increasingly mistake prone, bouncing across the?Hurry Downs straight shortly afterwards and eventually finishing third. Once again he misread the tyres, and was only close to runner-up O’Ward as the Mexican had also misjudged his tyre usage.

Franzoni started second for the next race, but lost a position at the start to Urrutia. An ill-timed move by the Uruguayan on leader O’Ward a few laps in handed Franzoni first place, which he converted expertly into a first victory by 8.9 seconds. Integral to his success was mastering the tyres.

A driver is only as good as their last race, and Franzoni looks better than ever going into the second half of the season.

Franzoni in his own words

On Jeff Green
“Jeff Green kept my dream going by being my team-mate last year. He is the most amazing team-mate I have ever had in my life and through that we became great friends. I learned a lot from Jeff, he was always teaching me and helping me in any way he could. There are no words to describe this loss. My deepest condolences to his wife Pam and all of his family. Jeff will always be remembered for how amazing and happy of a guy he was.

“If it wasn?t for him, I wouldn?t have been in Pro Mazda last year and I wouldn?t be in Indy Lights now. I wouldn?t have any testing this year, I would just be racing. He helped me so much last year ? he wanted to test, but in the end, I ended up driving even more than he did. He gave me his engine at Mid-Ohio when I had problems. He did everything for me to win and it?s so sad that we lost him.?

On his breakthrough victory
“When you win, it?s good. When you win first time in Indy Lights, it?s a different feeling. Of course it wouldn?t be possible without Mazda, Cooper Tires and Juncos Racing. What those guys are doing for me, it?s unbelievable, and finally now I can pay off this help.

“It?s unbelievable. I love this track. It was obviously a difficult weekend. Yesterday I had the worst race of my career, I made so many mistakes. I went off track three times by myself. We had the car to finish either first or second but I ended finishing third.

“And today I think I did one of the best races of my career. There are just no words to describe what I?m feeling.

“This victory, for sure, it?s for him [Green].?It?s difficult, it really touched my heart. But he was awesome and this victory is for him today.

“I?m glad that I could give this to Jeff. He?s the one who got me into Indy Lights and to give him this victory means so much.”

On what happens next
“Now we have to win all the remaining races because I?m quite far back in the points. The goal now, I think today?s the day I really learned the car, and knew how to do a whole race in this car and I think I did a good job. For now, I?m just going to focus on winning races.

?This has been a difficult weekend for us. We came here with two kinds of pressure: to get back into the points fight and to make a good showing for Jeff. I got the [race one] pole but had one of the worst races of my career, and today I had the best race of my career.

“It took a while, but it?s so nice to have my first victory in Indy Lights and now we have to try to win every race and get back into the championship. I think when you win a race, you open a door and you start to win more races. It will be difficult, but I?ll try to use the end of the year to win and learn as much as I can. I don?t know what will happen for next year but I know I?ll be ready.? 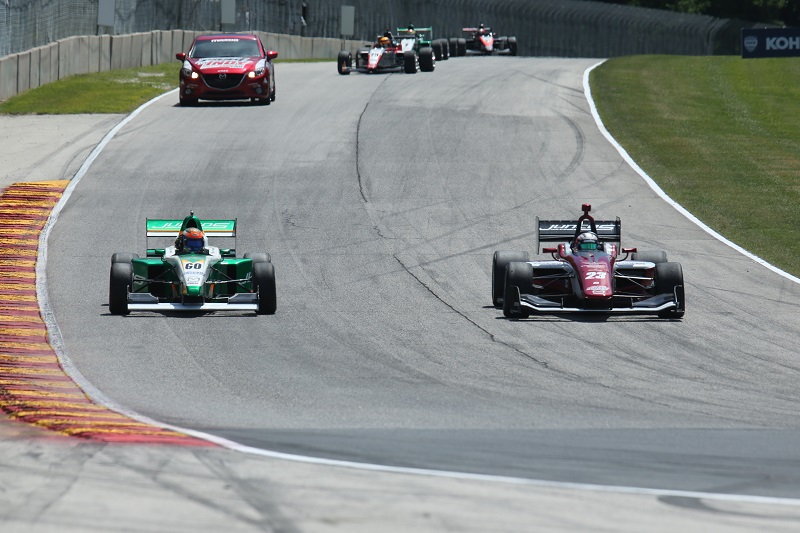