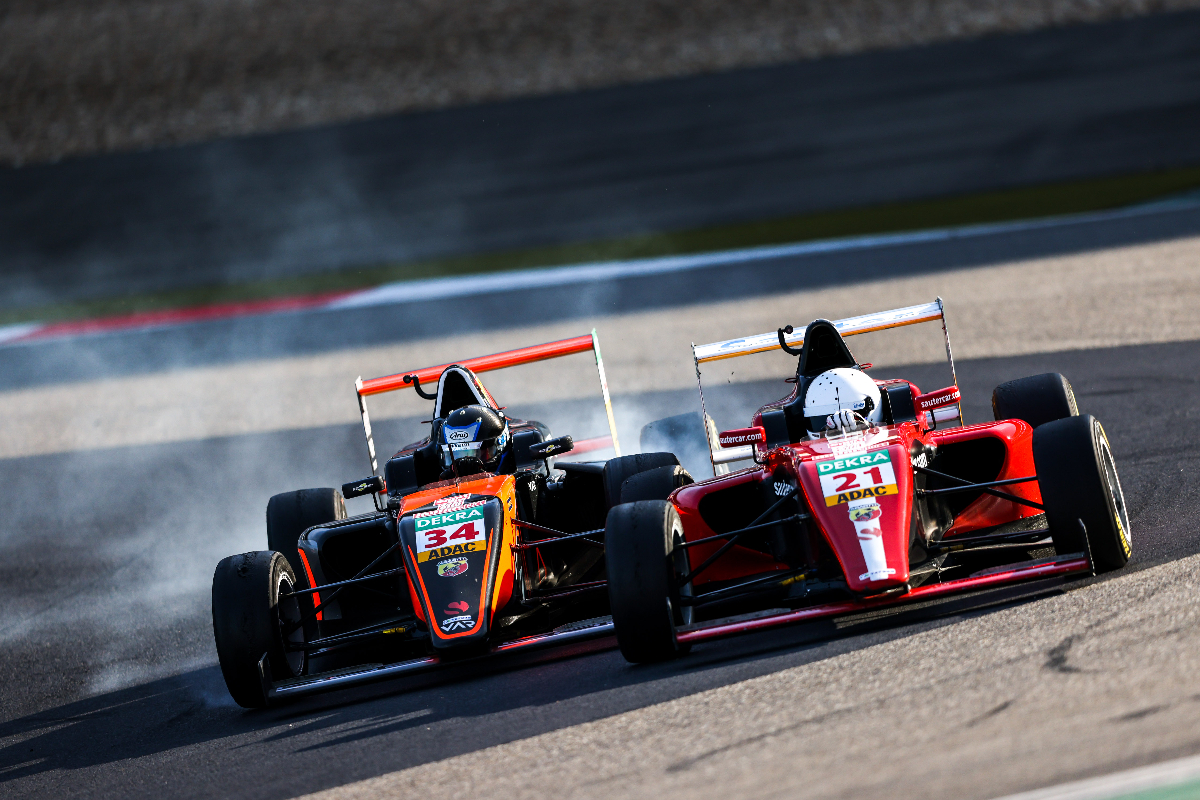 Armed with three bags of gifts, 17-year-old Swiss rookie Michael Sauter is doing the rounds of the ADAC Formula 4 paddock at Hockenheim. He stops at each of the other three teams to hand over large bags of Swiss delicacies to the mechanics of each team as a mark of gratitude for their help at the previous round of the championship.

Rewind three weeks: early Saturday morning in the paddock at the Sachsenring. Three hours before the start of the weekend’s first race, the awnings of the series’ continent-trotting teams – Van Amersfoort Racing, US Racing and R-ace GP – are closed.

Under the canopy of the family-run Sauter Engineering + Design team, six or seven mechanics are working hard on the rear of the red Tatuus T-014 Sauter drives. In a race act of paddock solidarity, Sauter’s two mechanics are joined by members of other teams, engineers from chassis constructor Tatuus and from engine builder Autotecnica, all trying to get the car ready to start.

Late in Friday afternoon qualifying, Sauter had gone off in what he described as “an unnecessary accident”, badly damaging the gearbox and rear of the car. Having inspected the car once it was returned to the paddock, the team reluctantly concluded there was no way repairs could be carried out and prepared to pack bags and head home to Switzerland.

Despite the best efforts of the combined workforce, Sauter was unable to take the start of Saturday’s race, but by race two on Sunday he was back on the grid. With only nine starters, Sauter was running eighth (which would have given him reversed grid pole for the third and final race) before making a small mistake on the penultimate lap and dropping a position.

However, the best was yet to come as Sauter was a remarkable fifth in race three as the leading runners struggled to manage their tyres on the punishing Saxon circuit. Missing one race had undoubtedly meant his tyres were in slightly better condition, but, as the team told Formula Scout, they had had to discard two of the six permitted tyres as a result of the qualifying crash. Without the off in race two, Sauter believes that “maybe it could have been even better than the still good fifth place”. 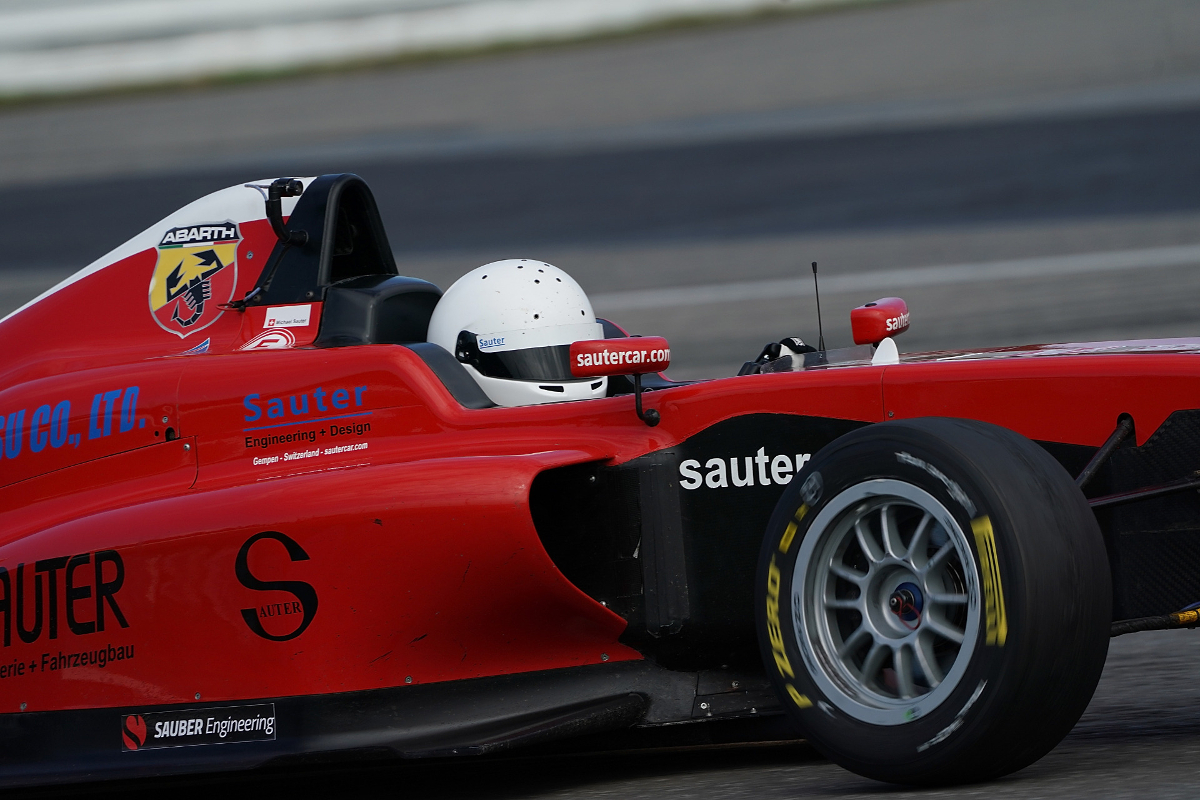 Alongside the huge transporters, catering facilities and multi-car awnings of some of the most professional teams in the European junior categories, Sauter’s yellow Mercedes van and trailer look like a throwback to an earlier, less commercial era.

“This is how F4 should really be” says Stephan Sauter, team principal and father of Michael.

So how does a small family operation go about taking on the series’ big teams?

“With a lot of commitment from the family as well as passion,” is the team’s explanation. “And we have also got a lot of support from the ADAC.”

Sauter Engineering + Design made its F4 debut at the start of 2021 with the goal of “competing, gaining experience and scoring some points”. The step into F4 was a “logical progression” for Michael, who had karted since 2012. He had strong results in mini karting, come fourth in the Swiss championship for X30 Junior karts in 2018 and progressed to X30 Senior.

The younger Sauter believes that he has developed strongly during the year, particularly in his “car control and ability to recognize the technical challenges”. Apart from the result at the Sachsenring, he also considers 12th place in race three at Zandvoort as a season highlight as it earned him his only rookie classification win en route to second in the rookie points.

Other than a single session in the two-day pre-season ADAC F4 test at Oschersleben, Sauter did not join any of the series’ official test days, while “some of the other teams are doing 15,000 kilometres of testing”.

“Instead of the official tests we have been to our nearest circuit, Anneau-du-Rhin, near Colmar, for around 12 days this year”.

The 4.0km track in north-eastern France (pictured below), better known for hosting bike racing and club-level car racing, is a 150km round trip from the team’s base in Gempen, near Basel. 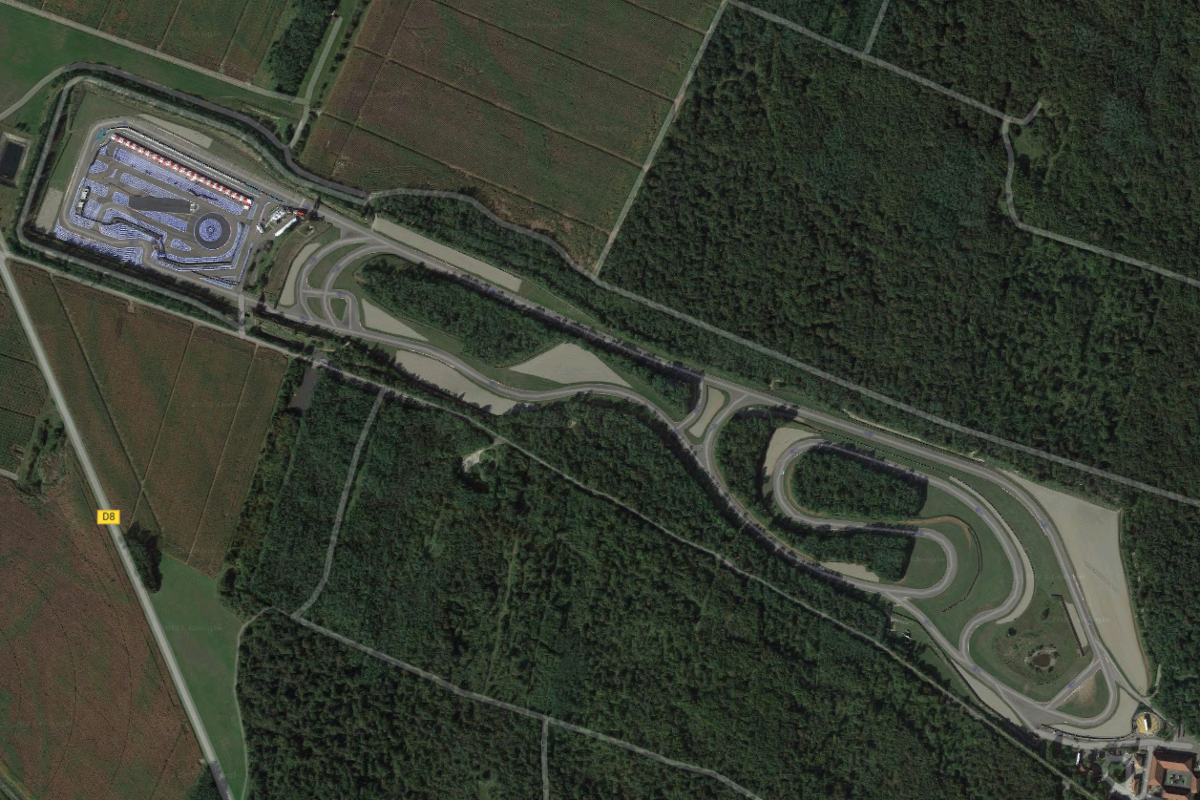 For 2022, ADAC F4 adopts Tatuus’s new second-generation car which the ADAC said has a “ready-to-race” €74,000 price tag. Despite cost control measures, particularly for spare parts, teams expect an increase of 20-30% in costs compared to 2021.

What does that mean for Sauter? Does the team plan to upgrade to the new car and continue in the series?

“Well, the driver would like to continue,” the team jokes, before confirming their continued presence in 2022, again as a single-car entry for Michael Sauter.

The announcement of two new series in Europe running the first-generation Tatuus F4-T014 chassis – GB4 in Britain and Formula Italia in Italy – ensures there is clearly a market to recoup some of the 2021 investment and the team has already sold and delivered its old chassis to a new owner. As for its own plans, Sauter hopes to be able to participate in any official pre-season tests “as long as the new car is delivered in time”.

Tatuus is against tight deadlines with its new cars, as customers in eight F4 series across three continents have ordered the new T-421 but freight delays have already led to postponements and disagreements in the United Arab Emirates’ series and its European delivery strategy is “one car per team” at first according to Tatuus’s chief executive offier Givanni Delfino.

Sauter will therefore need to wait a while to get its hands on the T-421, and once it does its ambitions are “to score points and to run at the front of the midfield, where possible”.

In addition to the F4 team, the family has a coachbuilding and car repair business which Michael is serving an apprenticeship at. The move into single-seater racing was in part to increase awareness of Sauter Engineering + Design’s existing work, and in 2021 they were able to “gain some new contacts and received some excellent feedback” by being in the F4 paddock.

When even experienced and highly successful teams such as Mucke Motorsport are withdrawing from single-seaters due to the unsustainable financial demands, Sauter is one of few remaining small family teams still taking on the FIA’s junior series.

More on ADAC F4
The route Bearman took to his momentous F4 title double
ADAC F4 to visit Spa in heavily revised six-round 2022 calendar
ADAC F4’s record low grid explained, and why it will be a one-off