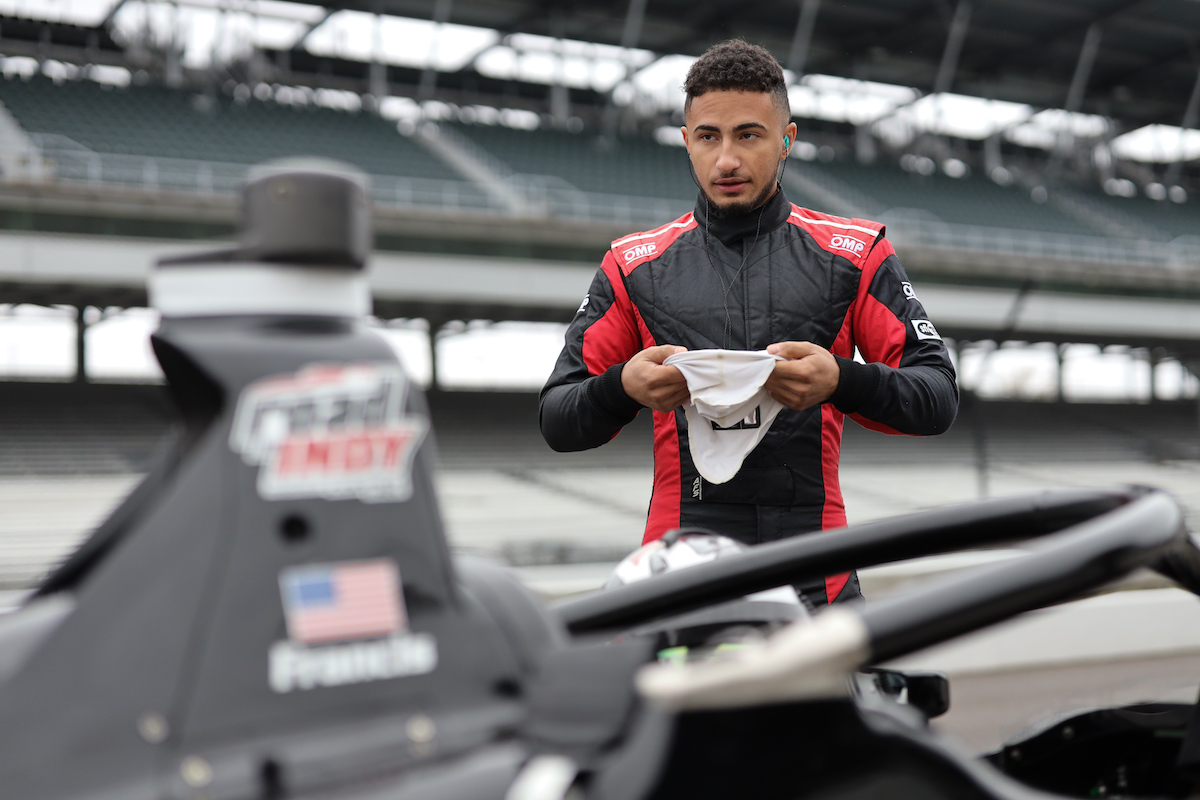 Indy Lights’ newest team Force Indy has finally confirmed its presence on the 2022 grid with rookie driver Ernie Francis Jr, and a press conference at Indianapolis Motor Speedway explained how it’s approaching it

It’s been known since last December that IndyCar series owner Penske Entertainment Corporation has planned for the Force Indy team it supports to step up to Indy Lights in 2022 with Ernie Francis Jr after a single year of running a car in USF2000, but delays of the delivery of its own Dallara IL-15 chassis has meant its preparations for such a leap have relied on collaborations with other teams for second-year single-seater racer Francis and the team’s crew to get the experience they need.

“Its so important to us to continue this journey that we started about a year ago, and also my goal and the goal of the team is to really develop talent that’s from the black and brown communities,” said Force Indy team principal Rod Reid. “And that’s something we’ve done from the very beginning, trying to bridge that.”

Francis, of Haitian American descent, won four titles in a row in the TransAm sportscar series before debuting in single-seaters last year in Formula Regional Americas where he claimed three wins and third in the standings. He also competed in the new short-track racing series Superstar Racing Experience (SRX) to gain oval mileage, and was up against some of IndyCar’s biggest stars of the past and present who he was able to beat. He capped off his year with Indy Lights tests.

“This is probably one of the biggest steps that I’ve taken in my career. This is just an incredible opportunity for me,” he said.

“If you’d told me a year ago that I’d be racing in Indy Lights, I would never have believed you. But I’m just so excited to get out there on track.”

“[Last year] I really got my feet wet in all kinds of backgrounds of racing, and was lucky enough to win a race in every series I competed in last year. Then we’ve done a lot of testing now. Feeling pretty ready for this Indy Lights series, really pretty prepped for this season, I think we’ll be competitive and looking forward to having some good results out there.” 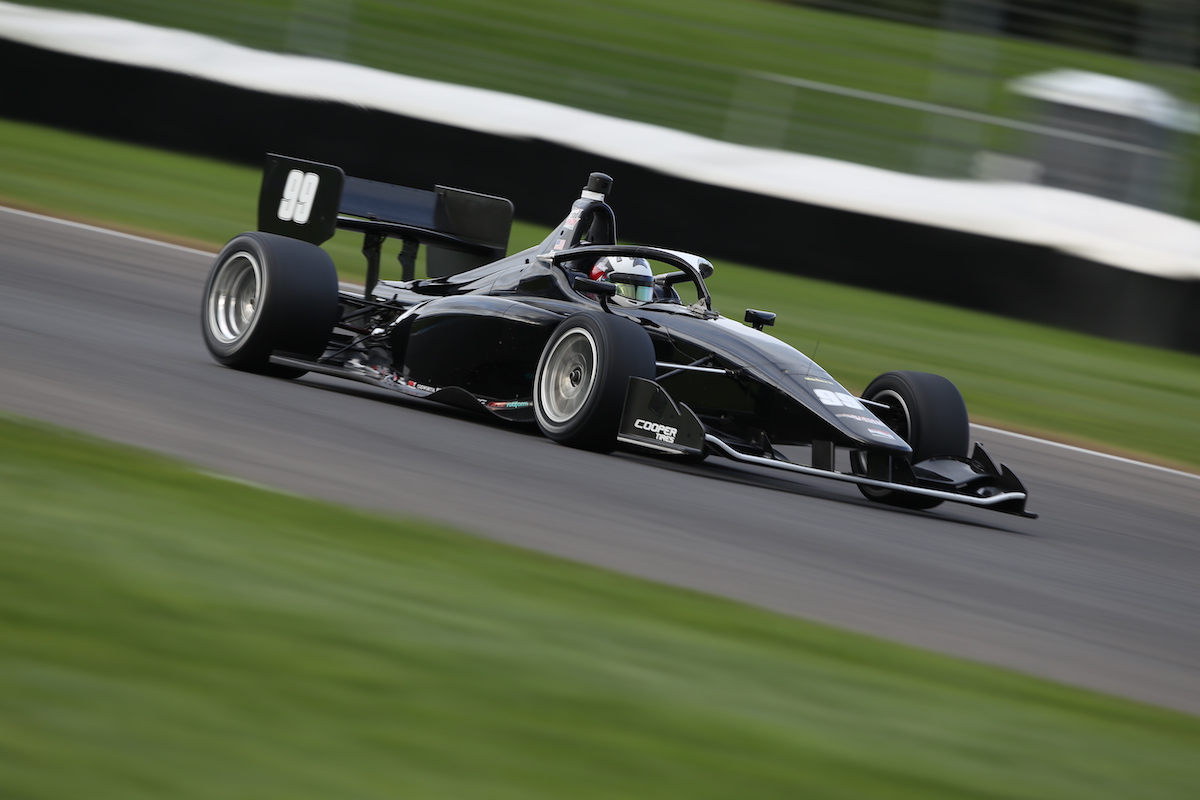 It will also be a big step up for Force Indy, whose engineering team has had training from IndyCar behemoth Team Penske, and Reid is aware how much of a challenge it will be despite the confidence he has in the team’s sole driver.

“We don’t have any illusions about the fact that the learning curve is great for us as a team,” he said in the press conference.

“It was the same way last year. Our goal is to perform to the ability we have, and do the best we can. We think that when we go out there it’s going to be super competitive. We had an opportunity to do some testing with other teams, teams that have been around for quite a while, and I think at one time in the Chris Griffis Test there was about a second-and-a-half between the quickest and the least quick, and that’s pretty tight when you think about here at Indianapolis going on the road course. It’s going to be competitive, and all we can do is the best we can and hopefully we can run up front.”

The USF2000 programme will be scrapped for 2022, with last year’s driver Myles Rowe now looking to have found a seat in the series at another team, and while Reid would like Force Indy to be present at multiple levels of the IndyCar support bill he also thinks: “It’s important to note we want to concentrate on the things that we have in front of us. And to go beyond that at this point probably wouldn’t be very wise.”

To smooth the transition to Indy Lights, there will be co-operation with rival teams as occurred in winter testing.

“There’s a lot of information we need to have, and as we did last year we actually worked with a couple of teams to help create sort of a technical alliance with us,” Reid explained in one of his answers.

“We don’t have a formal one right now, but we have been talking to and everyone’s been really very supportive throughout the paddock at the Indy Lights level. The answer is yes, it’s going to be an ongoing sort of fluid relationship, and not one singular relationship. We expect to have those alliances throughout the season.” 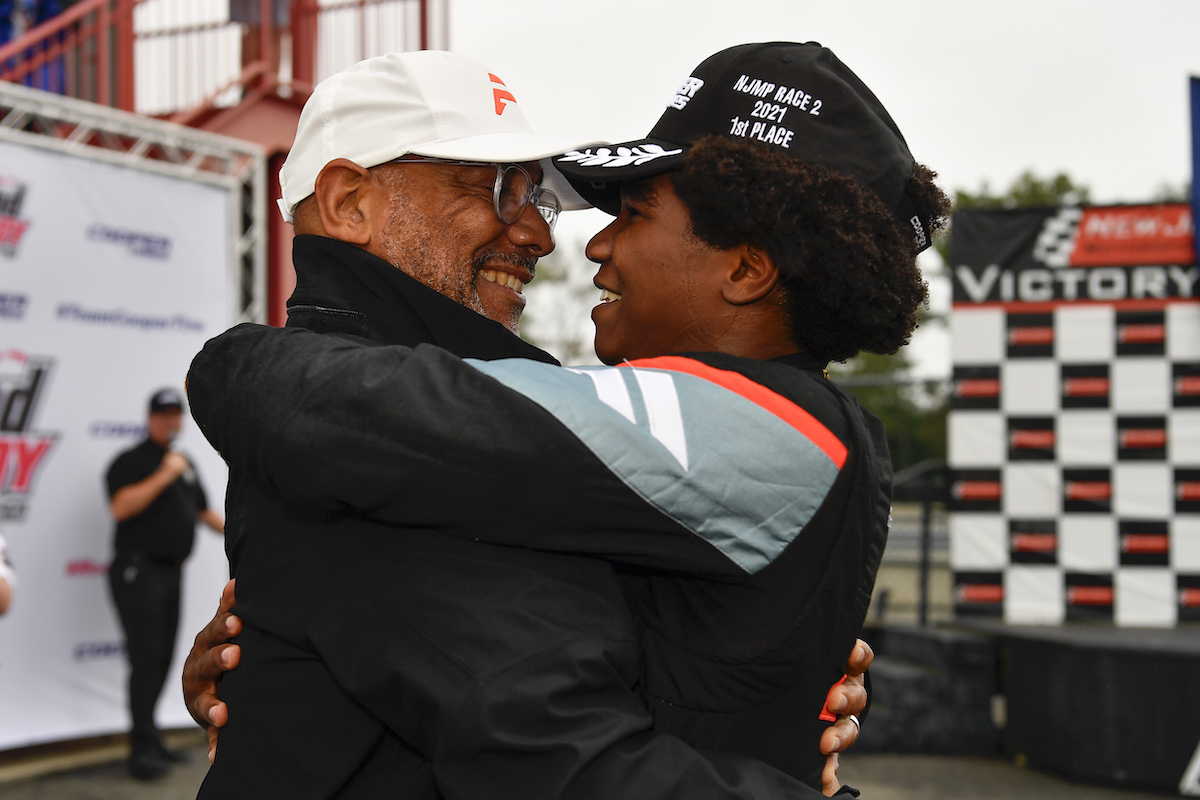 While Francis had a triple programme last year, continuing his successful TransAm career, he’s set to drop his other racing commitments now to focus on making the most of his Indy Lights opportunity. However it was his results outside of single-seaters that brought the 24-year-old to the attention of Force Indy and Penske.

“That group [of IndyCar drivers] was absolutely amazing to be around,” Francis said of his time in SRX last year.

“You get to the race track there, and we have two motorhomes. There will be six drivers in one, six drivers in the other, and I remember one of the races I was out there I had Helio [Castroneves], Tony Kanaan, I had Paul Tracy, Bill Elliott and Tony Stewart in mine I was with, and it was so cool to hear their stories and talk to them about everything that they’ve been through.”

Beating them to his first race win in the series, in a totally different discipline to what his previous experience was in, was “really a big boost for me, I think that’s what really helped me get this opportunity so I’m just so grateful for being able to race in SRX last year”.

“Noticing Ernie after he won that race did a lot for me and for the team to take a look at in our future. And then after we decided we were going to go to Indy Lights, we knew we had to find someone that could step up to that level. Ernie had actually been on our list of drivers at the very beginning, so I knew of him.”

It wasn’t the team principal who reached out to Francis first though, rather the head of the Indy Lights-owning Penske…

“I was actually in Brainerd, Minnesota getting ready to load into a TransAm race, and my phone rang and it was a Michigan phone number and it was Roger Penske on the phone,” recalled Francis. 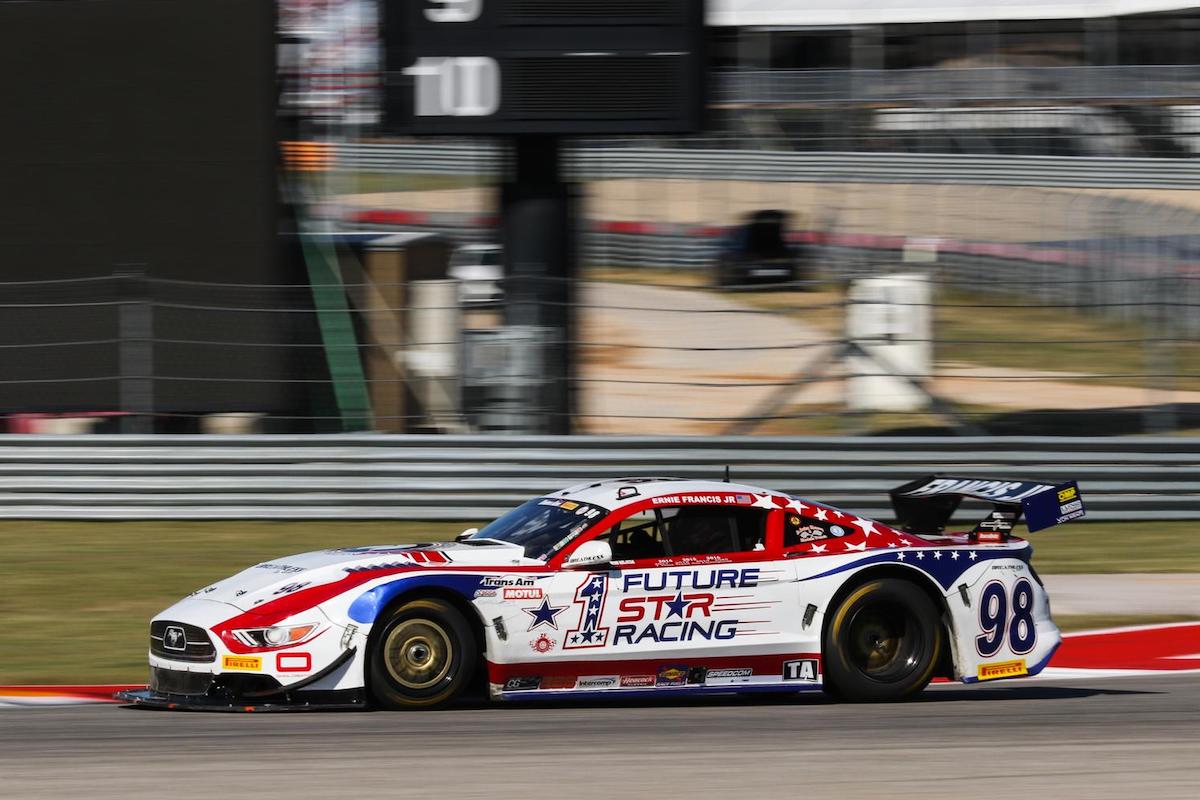 “And that’s something that was quite a shock. When he introduced himself I kind of didn’t say anything for the first 10 seconds, as I thought it was a joke at first. And then after we talked for a few minutes, he invited me out to Indianapolis to meet with him and meet with Rod and the rest of his team, and we sat down and talked about a few things there and things started to get put together from there.”

Francis appeared at Indy Lights’ post-season Chris Griffis Test with a car run by his FRegional team TJ Speed. At this point he was evaluating Indy Lights as one of several 2022 options, and had yet to nail down his single-seater future.

“Luckily I’ve actually driven a Lights car before, back in 2015 I did a test in one,” Francis revealed. “So I had a little bit of experience before I hopped in it for the first time at the Chris Griffis Test. The car’s a lot different than anything I’ve driven. It’s a lot faster than the FRegional car that I raced last year. The power feels very similar to TransAm cars. The biggest thing for me to get adjusted to was just the downforce levels. Being able to trust that the downforce is going to hold the car to the track, and to be able to trust that without seeing it happen. So that was the biggest challenge that I’ve had to overcome in the testing that we’ve been doing. But I’ve adapted to the car pretty well now, and I think I got a good feel for it.”

Like Reid he’s not making bold assumptions about where the team will be in the competitive order, but is still confident he can do well as a rookie.

“I’m a very competitive person, winning a lot of races in my past, so I don’t like going out there and losing. I think we’ll be fairly quick. We haven’t had as much testing as some of the other teams have had in this off-season, but I think that we’ll pick it up every race that we go out there and we’ll try our best every event and I think we can all expect to have our best results in the second half of the year and really be pretty strong by then.”

It’s not just the fact that a top sportscar driver is switching to IndyCar’s main support series and with an inexperienced team that is what makes Francis’ move of note, but also the influence he and Force Indy will have as part of IndyCar’s ‘Race for Equality and Change’ diversity programme on the next generation of drivers, engineers, mechanics and team bosses. 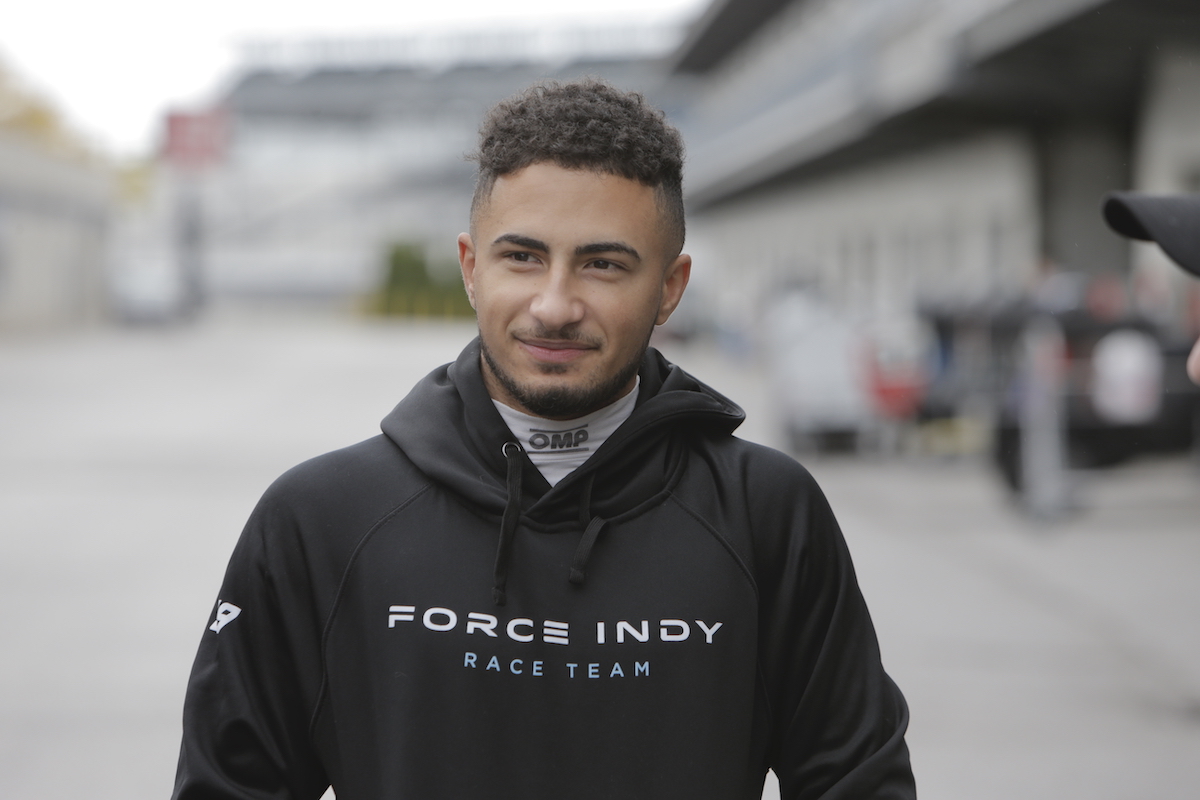 “It definitely has a little bit [sunk in I could be a symbol],” Francis said.

“Growing up racing out here I’ve always been a younger kid, and being from a Haitan-American background I look different from most of the other race car drivers out there. And I notice that when I go to the racetrack. Kids will naturally want to come and talk to me and see me at the racetrack, and they always want to know how I got started. I really enjoy talking to kids about that. I’ll have their parents messaging me on Instagram and trying to find out more information. I send them pictures, send them out stuff, so I understand that the younger generation definitely looks up to me as a driver and I’m ready for that and looking forward to it.”