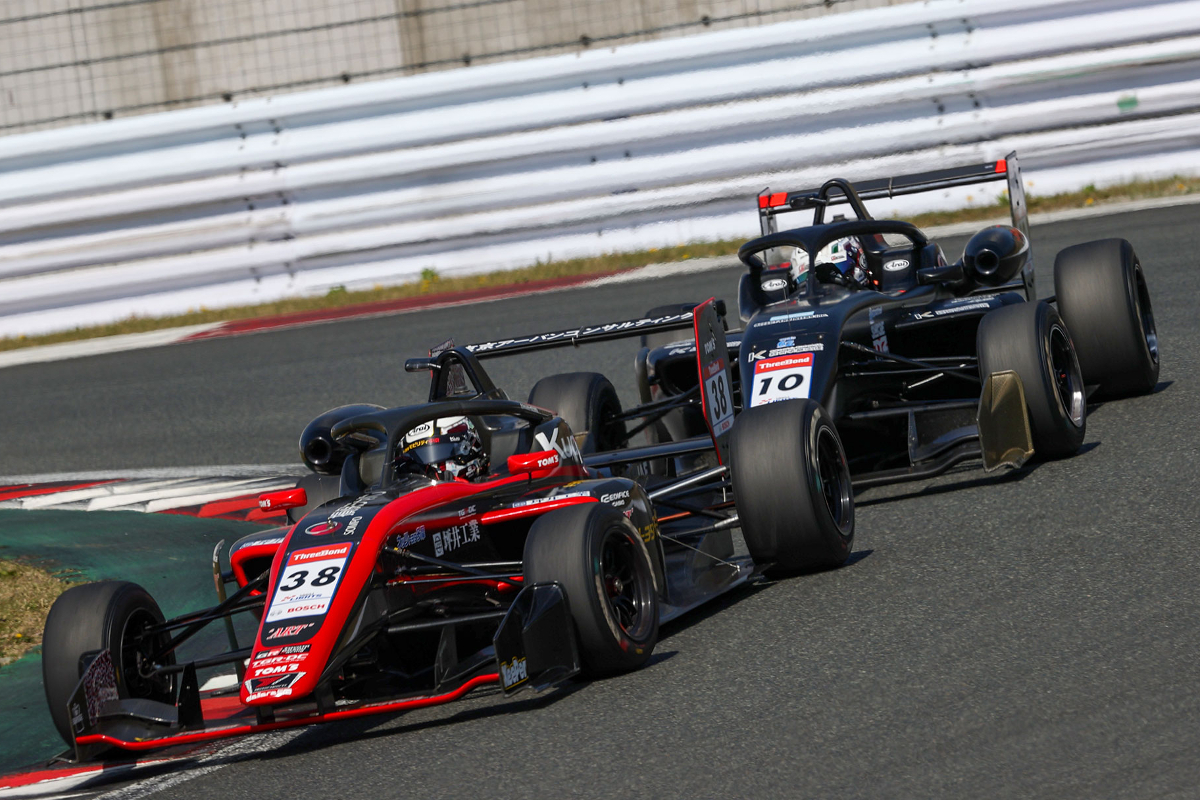 TOM’S driver Hibiki Taira leads the Super Formula Lights points after round one at Fuji Speedway.

A chaotic start set the order at the front in race one, as surprise debutant poleman Kohta Kawaai was beaten off the line by fellow front row man and debutant Kakunoshin Ohta who had the inside line for 1st corner and took the lead.

Seita Nonaka passed Kawaai too, and as the lead group went almost four-wide on the downhill run to turn two there was drama as Kawaai rearended Ohta. Iori Kimura went through into second and Ohta with a broken gearbox.

Kawaai continued but was almost rearended by Yuga Furutani at the start of lap two, while the top four of Nonaka, Kimura, Taira and Kazuto Kotaka broke away.

By keeping two or more car lengths between them all they had a quiet race after that with TOM’S driver Nonaka claiming his maiden win. Togo Suganami, another debutant, finished a lonely fifth after Kawaai ran over his own front wing and retired.

Reiji Hiraki just beat Furutani to sixth after the latter had to work hard to pass Hiraki’s brother Yuya, with the pair driving for their own Helm Motorsports team making its championship debut.

DRAGON and Nobuharu Imada had a big battle in the Masters’ classification which ended when Imada got spun as he closed the door at 1st. Masayuki Ueda ended up being the top Masters driver.

Lap one was key to the result of race two as well. Kotaka took pole ahead of Ohta, with Kawaai and Nonaka sharing the grid’s second row. Kotaka led away, as Ohta just held on to his second place through turn three as Taira passed Kawaai and Nonaka, but Kawaai had the better pace. He kept a defensive Taira busy for the rest of the race while Ohta chased Kotaka but could do nothing to prevent him from claiming his second career win.

Kawaai was put to the back of the race three grid, with Nonaka, Kimura, Taira and Kotaka filling the top four places.

Taira made a mega start, initially darting between the top two then going around the outside of both at 1st. Kimura passed Nonaka down the inside, then held him behind for the duration of the race as Taira earned his first win and the points lead.

Ohta and Kawaai charged up the order to finish fifth and sixth at the expense of a struggling Kotaka, who was demoted to seventh by a brilliant dummy move at 1st by Kawaai. DRAGON was the Masters winner after another intense Imada battle.