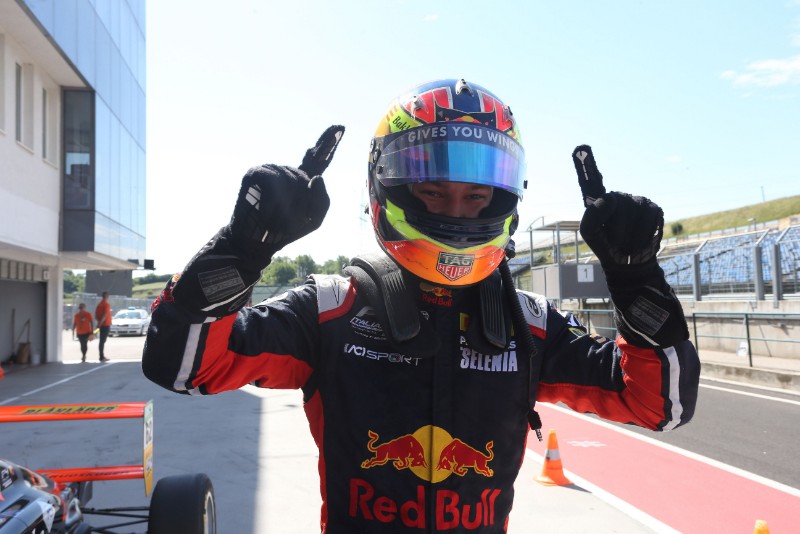 Red Bull junior Dennis Hauger won the first ADAC Formula 4 race of the weekend at Hockenheim, while his Van Amersfoort Racing team-mate Niklas Krutten crashed out while fighting for the lead.?

The VAR pair spent most of the race battling for the lead after both passing polesitter Theo Pourchaire on the opening lap.

Krutten led early on, with Hauger outbraking himself into the hairpin after trying to find a way by, dropping to third behind Pourchaire.

Hauger retook second place a few laps later and then closed back in on Krutten. After a couple of laps battling for the lead, Krutten spun into the wall on the exit of turn 10 with what appeared to be slight contact between the two cars.

Pourchaire was able to extend his championship advantage, while Hauger leaps to fourth in the points table.

Ferrari junior Gianluca Petecof took third place for Prema after a long race battle with Arthur Leclerc.? Leclerc got a poor start from the front row of the grid to run fourth early on, ahead of Petecof.

Petecof passed Leclerc for fourth halfway through the race, with Leclerc trying to fight back before the safety car period. On the final lap, Leclerc retook the place, but ran wide at the following corner defending from Petecof and then collided with Prema?s Paul Aron who tried to capitalise. Leclerc dropped to 10th, while Aron finished out of the points.

The final lap also saw a multi-car collision further down the field when Joshua Durksen lost control under braking for the hairpin, collecting several cars.

Sauber junior Roman Stanek finished down in 13th after losing his front wing on the opening lap, while Prema?s Alessandro Famularo was an early retirement.