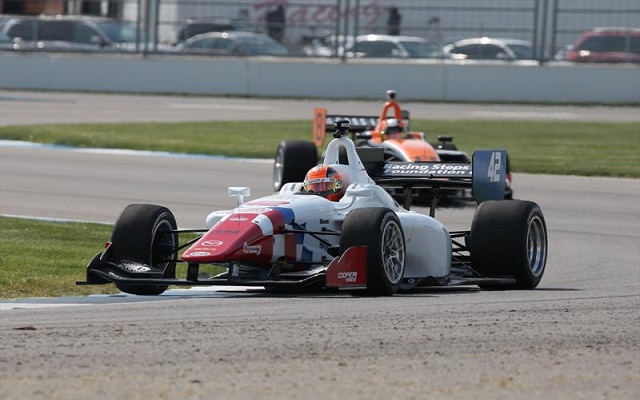 Schmidt Peterson Motorsports driver Jack Harvey will chase his first win of 2015 at Indianapolis, having taken pole position for Indy Lights race one.

Harvey had previously been on pole at Long Beach but was knocked out of contention into turn one.

At Indianapoli, he didn’t lead either of the practice sessions, but delivered in qualifying, beating Carlin’s Ed Jones by a tenth and a half in the final minutes.

The duo were followed by prototype racer Sean Rayhall, who will line up an impressive third for his second round in Lights with 8 Star.

Max Chilton and RC Enerson both led the timesheets at certain points, but ended up fourth and fifth respectively.

Championship leader Spencer Pigot was just sixth on the heels of his double win at Barber as he starts ahead of Scott Anderson and teammate Kyle Kaiser.

Belardi drivers Juan Piedrahita and Felix Serralles rounded out the top ten, the Colombian beating the Puerto Rican in qualifying for the first time in 2015.