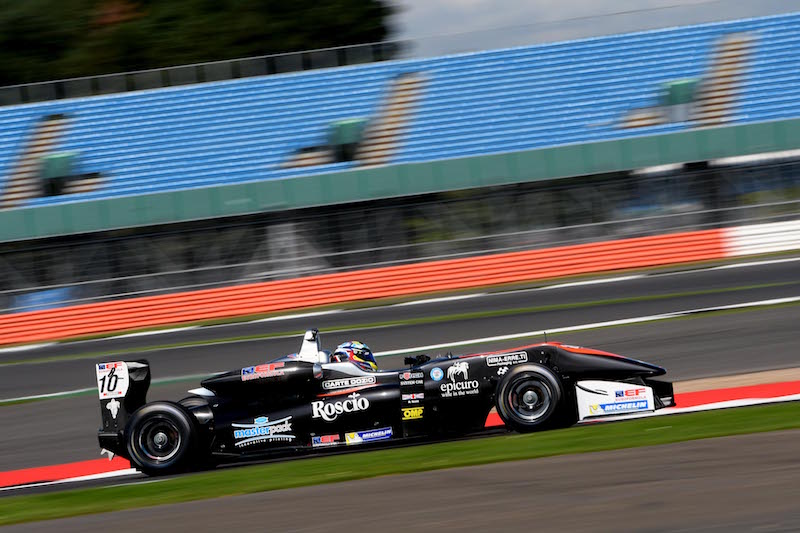 A crushing display in front of his home crowd at Silverstone resulted in a seventh Euroformula Open victory for Harrison Scott, while title rival Nikita Troitskiy finished a distant sixth.

Scott had it easy from pole, leaving his RP Motorsport team-mate Alex Karkosik to fend off Fortec?s Ben Hingeley and Carlin?s Devlin DeFrancesco while he set about on finding a rythmn.

He found it quickly, setting fastest lap after fastest lap that were often more than a second clear of the nearest opposition.

?The car was remarkable,” he said. “I was able to push from lap one. To win in front my friends and family is brilliant.?

He ended the 15-lap race 14.5 seconds clear of DeFrancesco, with Karkosik a further four seconds back after losing second place at one-third distance, but pleased to take his first podium.

Debutant Hingeley held fourth for much of the duration, only losing the spot on the penultimate lap to Ameya Vaidyanathan.

A lack of straight-line speed hampered him all race, and once Vaidyanathan was past he lost downforce in his wake, helping Troitskiy past for fifth.

Troitskiy, who had qualified a disappointing eighth, made slow progress up the order and his move for fifth involved going off track at Stowe. The Russian now sits 83 points behind championship leader Scott.

There were four retirements from the race. Simo Laaksonen ended his day on lap one after receiving a hefty hit at Brooklands from Tarun Reddy, Petru Florescu was retired by his team, Reddy crashed out on the Hangar Straight, and Christian Hahn sustained damage in a late race clash with Carlin?s debutant Guilherme Samaia.