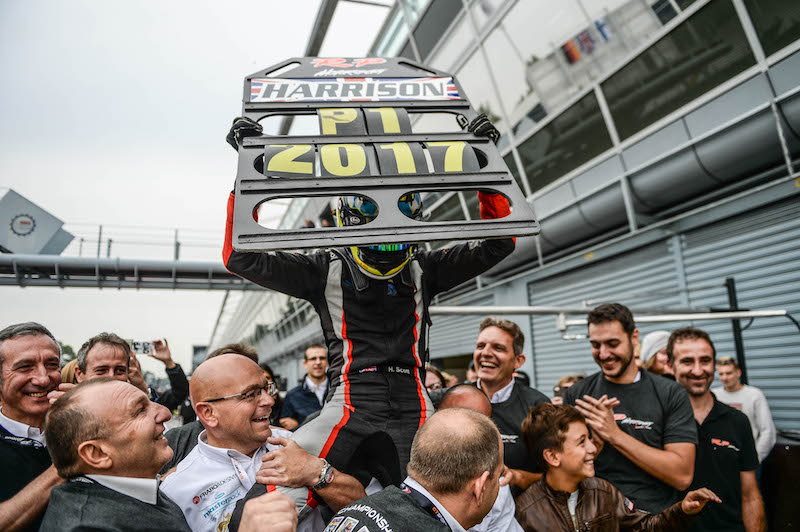 Harrison Scott was crowned 2017 Euroformula Open champion at Monza after taking his 10th victory of the season.

The RP Motorsport driver dominated qualifying, taking pole by over a second from Ameya Vaidyanathan.

The race then followed its usual path for the Englishman: fending off any challenges from pole and pulling away to victory unopposed.

It wasn?t quite that simple though, as two safety car periods meant he had to handle restarts on a circuit renowned for slipstreaming.

The first safety car came straight after the start when Devlin DeFrancesco was span into the pit wall and debris was strewn across the track.

This meant the race really started on the third lap, and Scott judged the restart perfectly to pull away from Ameya Vaidyanathan and Simo Laaksonen.

Laaksonen got a slipstream on Vaidyanathan and he moved ahead at the Retafillo chicane, putting Vaidyanathan into the clutches of those behind.

With Vaidyanathan now focused on maintaining third, Laaksonen asserted himself in second place until the second safety car of the race was called out.

On the sixth lap Nikita Troitskiy finally put a move on Vaidyanathan, but made contact at the Roggia chicane and dropped down the order with a puncture. A crash between Daniel Lu and Thiago Vivacqua led to Vivacqua abandoning his car on the exit of Ascari, and the safety car was called out on lap eight.

The Indian lost the place to Fittje on the run to Parabolica after the safety car restart, before pulling off a stunning move to reclaim the place at the final corner.

Fittje moved back past after cutting across the Retafillo chicane on the next lap, and started to hunt down second place man Laaksonen.

WIth two laps to go Fittje took the place, handing RP Motorsport their first one-two of the season.

Laaksonen took his second podium of the season in third, with Karkosik finishing fourth.

Vaidyanathan had maintained fourth after a short battle with Karkosik, and eventually lost the place on lap 15 to Pedro Cardoso. He lost fifth and sixth further round the lap, before eliminating himself and Tarun Reddy at Lesmo 1 on the next lap.

Karkosik also overtook Cardoso for fourth on that lap, and miraculously kept the position despite the Teo Martin Motorsport driver rear-ending him on the final lap.

Lu finished 15th on his second Formula 3 start, an unrewarding result after spending the beginning of the race in the top five.