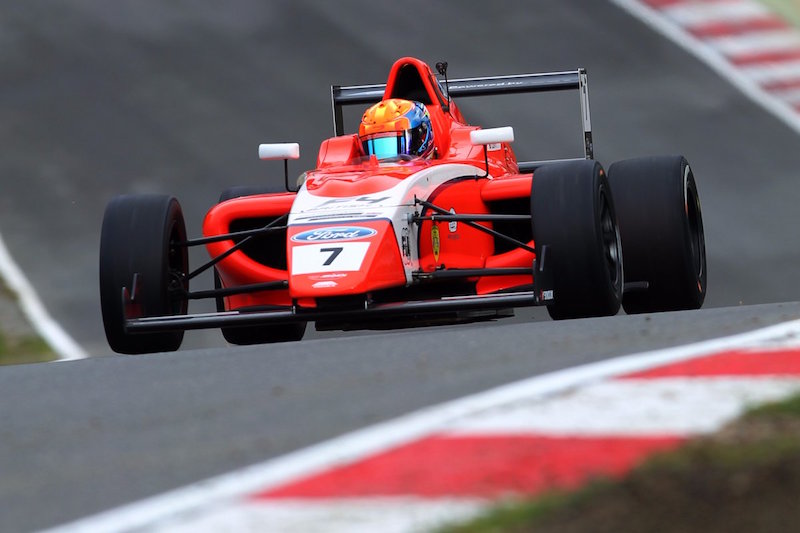 Alex Quinn won the final race of the British Formula 4 season at a damp Brands Hatch, while Hampus Ericsson secured the Challenge Cup with a third place finish.

Quinn turned his second pole of the season into an immediate lead over Linus Lundqvist, but could not extend it thanks to a lap one safety car.

Once racing resumed Quinn did the same, resisting two laps of attacks from Lundqvist before pressure from behind the Swede allowed Quinn to create a gap up front.

Having cleared the threat from behind Lundqvist started chasing Quinn again, setting fastest lap but eventually dropping back and leaving Quinn to take his fourth victory of the season.

Ayrton Simmons initially held third, attacking Lundqvist while defending from Logan Sargeant. He span out in the damp, and when Sargeant did the same it left Ericsson in a lonely third place.

With rival Harry Webb spinning out on lap one, Ericsson also reclaimed the Challenge Cup lead, and thus title, alongside his second overall podium.

Newly crowned champion Jamie Caroline fought a rearguard action for much of the race, but after seeing team-mate Sargeant off the track he upped the pace and established himself in fourth.

The Carlin driver eventually finished sixth, thanks to a questionable decision to slow down prior to the finish line to celebrate his title triumph.

This promoted other team-mate Patrik Pasma to fourth, with Caroline?s title rival Oscar Piastri moving up to fifth.

Oliver York held off Manuel Sulaiman for seventh, with Olli Caldwell and Karl Massaad rounding out the points.