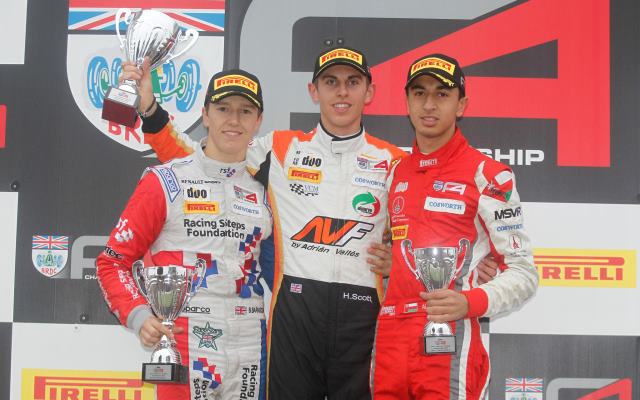 Harrison Scott picked up his second win of the BRDC Formula 4 Autumn Trophy in the fourth and final race of the opening weekend at Snetterton.

Driving for Douglas Motorsport, Scott led away from pole position ahead of his fellow Formula Renault 2.0 regular Ben Barnicoat.

He opened up a 1.7-second lead on the first lap and managed his advantage over the remaining distance to win by 2.342s.

?We?ve had a really strong weekend which is good,” said Scott. “I managed to get away at the start, got off the line really well, and then built up a bit of a gap in the first few laps.

“From there it was all about controlling it whilst learning the new car, as this is the first time I have driven it in the dry.”

Scott will take a 33-point advantage into the second leg of the Autumn Trophy at Brands Hatch next weekend over?Sennan Fielding, who finished back in fourth.

The HHC driver got ahead of Barnicoat for second off the start but conceded the place again at the end of the opening tour. He was then forced to pit later in the race to allow his team to address a loose engine cover.

That handed a first podium to Faisal Al Zubair, who finished 41 seconds off the lead.

Sisa Ngebulana and Ameya Vaidyanathan came together on the first lap, forcing the former into retirement and leaving the latter to trail home in fifth.

Struan Moore did not start the race after his incident in race three aggravated a previous injury, and was taken to hospital for precautionary checks.