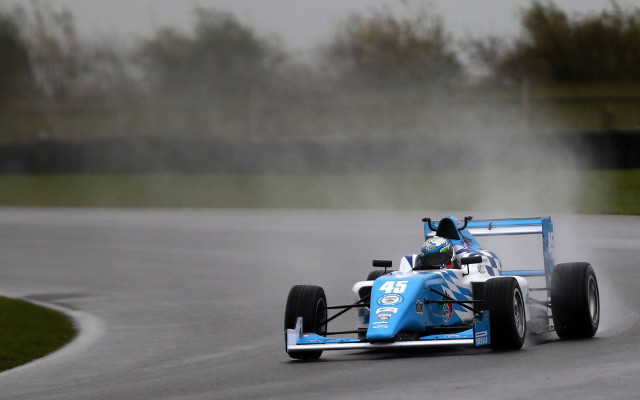 Scott beat fellow proven single-seater aces Struan Moore, Sennan Fielding and Ben Barnicoat to pole position for Douglas Motorsport, and beat the competition away from the line at the start of the race.

Barnicoat climbed to second ahead of Moore, while Fielding fell to the back of the seven-car pack.

Scott opened up a two-second margin ahead of Barnicoat and his led increased considerably on lap three when the Fortec driver hit trouble.

Inheriting second was HHC Motorsport driver Sisa Ngebulana, who rose from sixth to fourth at the start before then passing Moore.

Scott was able to extend his lead from nine seconds to 16 by the end of lap 10.

Barnicoat had fallen to fourth but managed to get back ahead of returning Hillspeed racer Struan Moore before the end to make the podium.

Contact between Barnicoat and Moore also enabled the recovering Fielding to get fourth for HHC.

Ameya Vaidyanathan had been ahead of Fielding in the second Hillspeed car when he went off at Riches and retired, allowing Fortec’s Faisal Al Zubair to round out the six finishers.

Update: Barnicoat was given a 20-second penalty for the contact with Moore, dropping him to fifth.