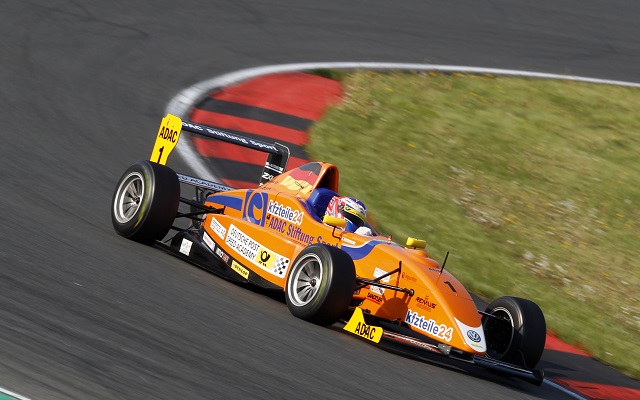 ADAC Berlin-Brandenburg driver?Maximilian Gunther?took his first win of the 2014 season at Oschersleben this morning.

The ADAC Stiftung Sport man converted his pole position into victory, albeit it wasn’t all straightforward for the German star, with?Mikkel Jensen putting him under pressure for most of the race.

Gunther made use of his pole to get the jump on the Jensen and lead out of the first corner. Early on, he began to pull away from the Dane, who was coming under increasing pressure from?Marvin Dienst.

However, a one-sided race was not to be, as Jensen eventually settled into second and set off after Gunther, having also been aided by the German almost being caught out by a big slide halfway through the race.

The pair battled for the second half of the race, but, despite being very close on several occasions, Jensen was unable to find a way through, allowing Gunther to take the victory. Dienst eventually came home third ahead of teammate?Kim-Luis Schramm and Lotus driver?Ralph Boschung.

Igor Walilko?was the only casualty of the race, spinning off into the gravel with eight laps to go after battling?with?Nico Menzel over 11th place.