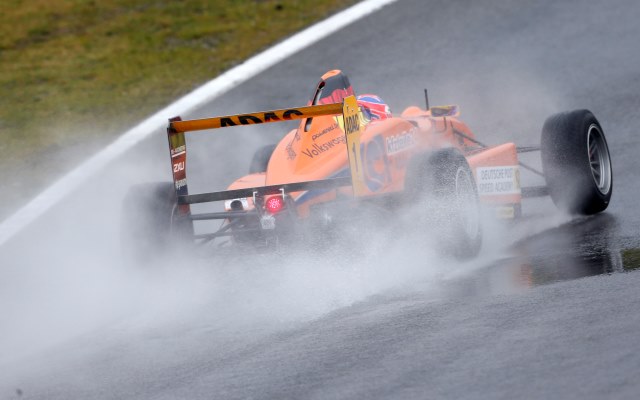 Maximilian Gunther came out on top in a wet and delayed qualifying session for round two of the ADAC Formel Masters season at Zandvoort.

The Mucke Motorsport driver was over half a second quicker than championship leader Mikkel Jensen to claim pole for race one, and also had the best second-quickest time to claim top spot on the grid for race two.

“A perfect start to the weekend, things could not have gone better,” said Gunther.

“My car was set up brilliantly for the difficult conditions – many thanks to my team. We can build on these two pole positions in the upcoming races. I felt really at ease despite the rain and had no problems. I’d prepared myself for interruptions during qualifying and adjusted my programme to suit.

“If we get off to a good start this afternoon, then a win is definitely possible. I’m not bothered about the weather here; we’re in a good position both in the wet and in the dry.”

Fabian Schiller was third – over a second slower than Gunther – with Tim Zimmermann fourth. Kim Luis Schramm took fifth ahead of the Lotus pairing Ralph Boshung of Joel Eriksson.

The top ten was completed by Nico Menzel, Marvin Dienst and Dennis Marschall.