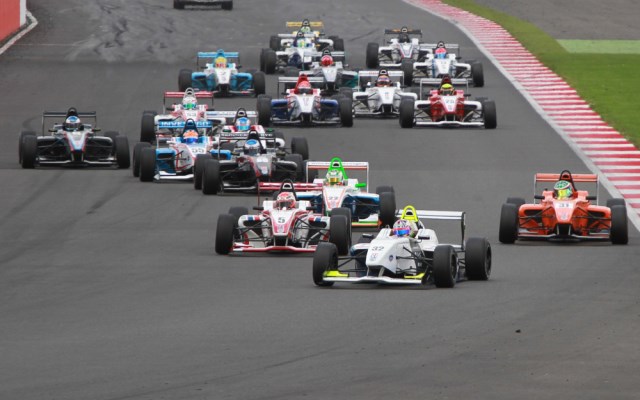 Ross Gunn claimed a commanding lights-to-flag victory in the second BRDC Formula 4 race of the weekend at Silverstone, recording his second win of the campaign.

Gunn led from the reverse grid pole position, with Raoul Hyman managing to stay in touch over the opening laps. Hyman however was then passed by Jack Barlow?on lap four, releasing Gunn to extend his advantage to 4.6 seconds on his way to victory.

“That was a great race to be honest,” said Gunn. “Starting from pole I had a pretty good first few laps and I had Raoul Hyman behind me and I saw I was starting to pull away. Then I had Jack behind me and I thought he would catch me up because he’s a very good pedaller.

“I decided to start pushing mid-race and I managed to get a gap and was lapping very consistently and on the last few laps I saw I had a pretty good gap and was able to ease off slightly towards the end. The car was fantastic, I have no complaints and I’m really happy and looking forward to race three.”

James Greenway passed Hyman on lap five to move up onto the podium, finishing within a second of Barlow.

Charlie Robertson followed Greenway past Hyman to finish fourth ahead of race one winner Matthew Graham. Jake Dalton came through from the back of the grid after his race one retirement to finish in sixth, one spot ahead of Seb Morris who lost out in a tussle with Graham over fifth on lap four.

Struan Moore finished in eighth ahead of championship leader Jake Hughes, who had a quiet race to ninth but will start race three from pole thanks to his fastest lap from race one. Hyman finished tenth.

Sato storms away to race victory at the N?rburgring