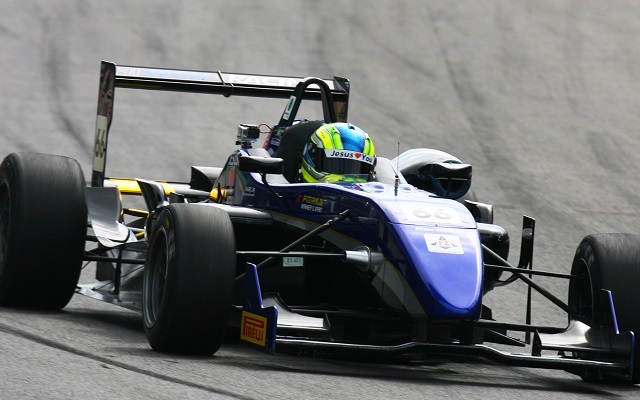 Felipe Guimaraes started the 2014 Formula 3 Brazil Open event at Interlagos with a victory in race one. The Brazilian led every lap of the 30-minute race and took the checkered flag 1.5s ahead of his teammate Victor Franzoni.

Guimaraes started the race from pole due to setting the best lap of the morning qualifying session, which had taken place on a dry track. However, the rain had fallen over the lunch break and, as such, the race began on a drying track. Because of that, the field started under the safety car and the Hitech man had no trouble keeping the lead.

However, it wasn’t all smooth sailing for Guimaraes, as Franzoni kept him busy for the entirety of the race. The Formula Renault veteran was quicker in certain parts of the track, but couldn’t find the right moment for an overtaking move and settled for second at the line.

Behind the leading duo, Raphael Raucci finished third following a solid recovery race. The driver from Sao Paulo stalled in the grid and tumbled down to last under the safety car. He managed to claw his way back to the front throughout the race and passed Fernando Galera with two laps to go to finish on the podium.

Despite missing out on the top three, Prop Car?s Galera had no reason to be frustrated, as fourth secured him the win in the B-Class. His closest class rival Leandro Florenzo took fifth, followed by Artur Fortunato, Nicholas Silva and Victor Miranda.

Dzhon Simonyan finished a lap down, not having recovered after qualifying issues, while Lukas Moraes, who started third on the grid, retired during the race due to a car issue.

Brazil Open rules stipulate that all drivers will take part in two heat races over the weekend, which will make up the grid for the pre-final. Both races contribute to a combined points tally, with the winner taking no points, the runner-up – one, the third-placed driver – two and so on.? The driver with fewest combined points will start the pre-final from pole and the outcome of that race will set up the grid for the main event.