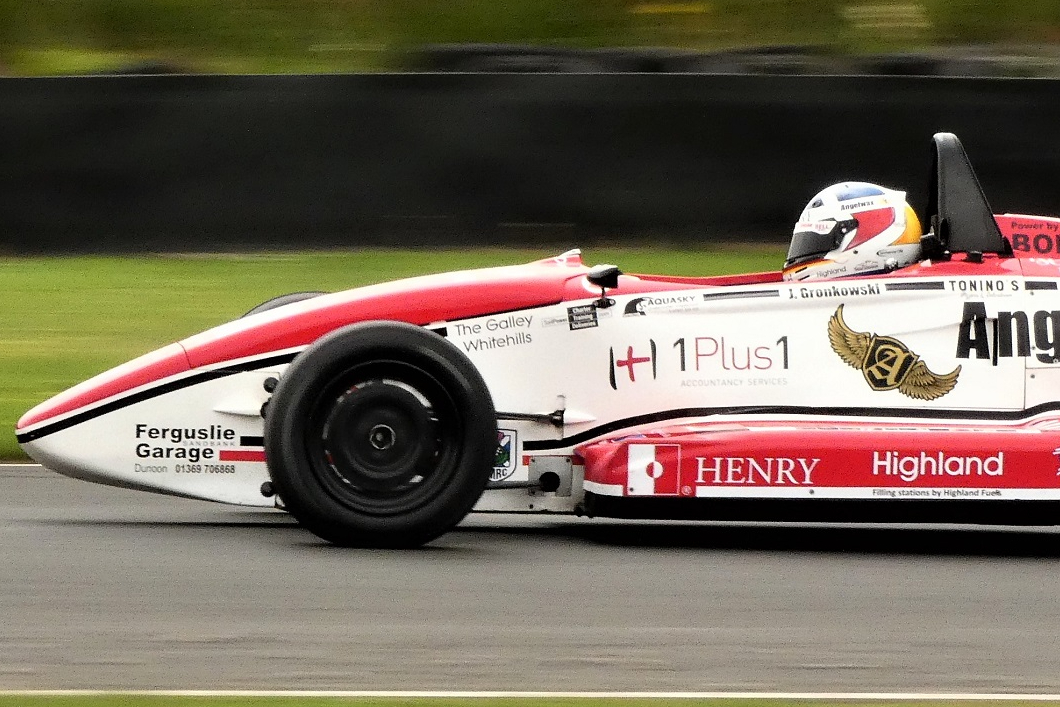 The Van Diemen driver ended the season with two dominant wins, escaping frenetic battling behind in each of the 12-lap encounters.

Gronkowski announced at the end of September that he would be stepping away from driving to pursue sim racing, and began his final FF1600 weekend by topping qualifying.

A superb getaway ensured he wasn’t challenged on the run down to Duffus Dip for the first time in race one, as fellow front-row starter Matt Chisholm fended off the attentions of Neil Broome who briefly showed his nose on the entry to Duffus.

Indeed, Chisholm’s raw pace had been a match for Gronkowski’s as the race wore on, but the defensive effort needed to keep Broome at bay proved decisive at the finish.

Having struggled with a brake issue during qualifying and morning testing, Graham Brunton Racing’s Logan Hannah was off the pace in race one as well, finishing a distant fourth.

There had supposed to be two additional cars in action courtesy of KC Motorsport, running BMW Compact Cup racer Steven Dailly and Michael Macpherson, but only Macpherson made it out.

Dailly encountered clutch problems during the initial shakedown of the car on Saturday evening and further issues with the handling of the ex-Glenn Alcock Ray left him “pretty demoralised” ahead of qualifying.

He decided to sit out the day’s action, while Macpherson retired from race one with an as yet unknown problem; the same issue forced the car normally run for Andrew Elliott out of race two.

It was a shame, as the battle for second behind runaway winner Gronkowski was super competitive in that second encounter.

The champion, already crowned ahead of the weekend after the withdrawal of GBR’s Michael Gray (who is preparing for the FFord Festival), leapt away again at the start while Broome divebombed Chisholm to grab second at Duffus.

Unbeknownst to him, Broome’s throttle had stuck open, forcing him to run wide at McIntyre. Simultaneously, Hannah – whose brake issues had been resolved by a simple full swap from another GBR car – had passed Chisholm at Leslie’s and therefore inherited second at Butcher’s as Broome recovered.

Chisholm and Hannah then duked it out over the next few laps, with the positions changing back and forwards. Eventually, Chisholm made his move stick at the Hairpin with Hannah unable to fight back, instead focusing her attentions on keeping Broome behind.

Broome did sneak past in to third at McIntyre on the final lap, but then ran far too deep which allowed Hannah to reclaim third at Butchers until the flag.