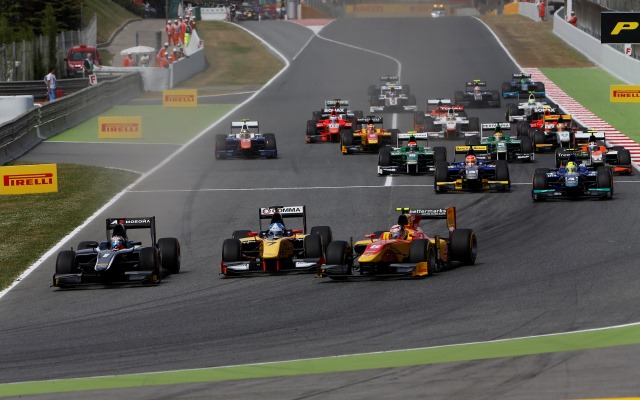 Ahead of the new GP2 season there was plenty of optimism around a series that had been through a difficult couple of years. In Stoffel Vandoorne and Raffaele Marciello, two of the most exciting talents around had arrived in the category to join a number of other strong prospects.

While expectations of a rookie champion were perhaps ambitious, it was still hoped that talent would perform well up against the more experienced campaigners. Things got off to a good start when Vandoorne won on his debut in Bahrain, but in round two in Barcelona last week misfortune struck most of the championship’s most exciting talents.

That’s left a championship situation where Jolyon Palmer sits on top on 70 points, 22 ahead of fellow fourth-year driver Julian Leal while Johnny Cecotto is up to fourth after his win in Spain.

Vandoorne is sixth, with only the 25 points from his Bahrain win to his name. Mitch Evans has just two points, while Daniel Abt, Alexander Rossi, Raffaele Marciello and Facu Regalia have yet to register points at all after two tough weekends.

After the optimism of pre-season off the back of the likes of Davide Valsecchi, Luiz Razia, Fabio Leimer and Sam Bird all failing to make progress into F1 after several years at this level, this current pecking order is pretty disastrous for GP2.

The series needs super-talented drivers to come to the fore. It is the prospect of watching future F1 stars that bring in the viewers, and it is also those same drivers that will turn heads among the F1 teams should they perform. It’s hard to imagine any F1 bosses making contact with the management of the likes of Palmer and Leal since Barcelona, unless it’s because they see an opportunity to bring in their sponsors. It’s been shown in the last couple of years that F1 teams are simply not interested in drivers that have taken years to succeed in GP2.

Often the less-experienced drivers have struggled for pace in GP2, but that simply hasn’t been the case this year. Most of the drivers in question have qualified well for one if not both weekends so far.

After Vandoorne’s win in Bahrain, he qualified tenth in Barcelona which was slightly disappointing but not the end of his weekend. What did it for him was stalling on the confusing aborted start. He fought back to 13th, where he then started the sprint race, progressing on to tenth. 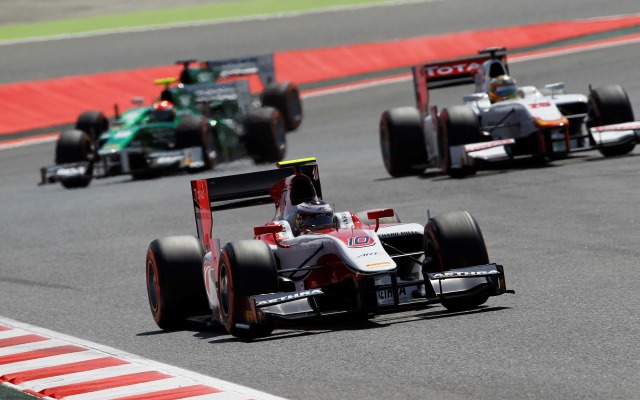 Marciello qualified a decent eighth in Bahrain, but a poor start and a drive-through for pitlane speeding dropped him to 18th in the feature race and a stall in the sprint left him 24th. He qualified a fine fourth in Barcelona, but got another bad start at the real beginning to the feature race and was then caught up in a collision further around the first lap with Abt.

The collision wasn’t really the fault of either driver – Rene Binder had launched a move down the inside of the pair of them, leaving Marciello with nowhere to go than collide with Abt, who wouldn’t have been able to see the problem developing. Both were left at the back of the grid for Sunday, with Abt progressing well to 12th and Marciello finishing 16th.

Abt hasn’t lacked pace either, qualifying third in Bahrain but problems dropped him back to 13th, where he started and finished in the sprint. He could only qualify 14th in Spain, but that was ahead of Cecotto, who won the race on the same strategy as Abt had been set to be on until the collision.

Rossi qualified a poor 15th in Bahrain, and his race was even worse as he fell back to 22nd. He then ended up 25th in the sprint after early contact. In Spain, after starting eighth, he was running fifth until a transmission failure. Starting 21st on Sunday, he made it as far as 14th in the race.

Evans ran fourth in the Bahrain feature race but struggled with tyre degradation, dropping him to 14th. He fought back to seventh in the sprint. In Barcelona, he fought for the lead into turn one but suffered contact. He came back to 14th, and a great start to the sprint put him into sixth but he again dropped back with tyre wear at the end.

This sounds like a long list of excuses, and one might respond with ‘if they’re so much better than everyone else, why haven’t they shown it’. But in the majority of cases, the drivers mentioned haven’t been to blame for their misfortune. All of them have shown good pace in qualifying and race trim, and yet there’s a real lack of results to show for it.

This is where the grid format is causing a problem. Particularly if we look at Barcelona. Vandoorne, Evans, Marciello and Abt all suffered issues at the start of the feature race, and Rossi’s retirement came shortly afterwards. None of them scored points, and they were all left starting further down in the sprint race than they deserved to. The likes of Abt made great progress, but with no reward. 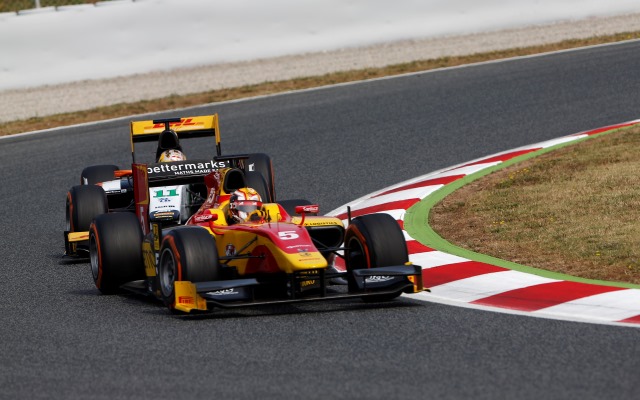 Marciello and Abt made progress from the back of the grid, but to no avail (Photo: Sam Bloxham/GP2 Series Media Service)

It’s expected that the less experienced drivers are going to have problems, be it contact, poor starts or bad tyre wear. The likes of Palmer and Leal have been through this in previous years, and now they finally know how to have trouble-free weekends. The grid format means that if drivers do have a problem in the feature race, their weekend is ruined, often through no fault of their own. And this is preventing the talented drivers from getting the results they really deserve.

If the race two grid was also determined using some form of qualifying result, drivers would have a second chance to prove their efforts if the feature race went badly for them. This format is used in Formula Renault 3.5 and FIA Formula 3, two championships where we see talent come to the fore over experience. Good drivers get into trouble in the first race of the weekend, but are able to try again in the later races.

Imagine if Kevin Magnussen had had to start from the back of the second FR3.5 race in Paul Ricard last September, having been excluded from the first for a technical infringement from his team. We wouldn’t have been able to witness his great comeback on the Sunday, and he would have ended the weekend point-less through no fault of his own when he was the fastest man around.

The reverse grid concept does help to create good racing, and stop the same people winning over and over. Sometimes, it does help people to shine who were otherwise having a tough weekend. But they still need to have finished in the top eight, which is no easy task.

Last weekend it even allowed the talented Felipe Nasr to win at last, despite only starting sixth. But there’s a good chance he might have won in one of his previous 49 starts had half of them not been a reverse grid affair.

Some people want GP2 to provide good racing, but I’d rather see it showcasing the most exciting drivers around. Future world champions, not fourth-year GP2 veterans. The likes of Palmer are very good drivers, but they’re not at that special level needed to race in F1 for anything other than a couple of years. 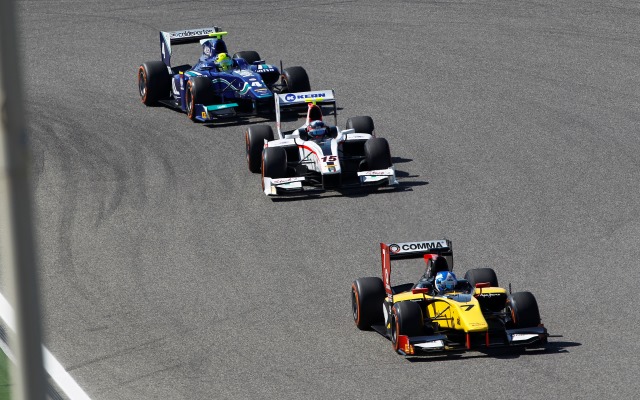 Given the sheer lack of track time available to GP2 drivers over a race weekend (there’s 45 minutes of practice and 30 minutes of qualifying – Formula Renault 3.5 practice varies but has had four hours, as well as one hour of total qualifying time) – something else working against the lesser-experienced drivers – I would be tempted to say that GP2 should add a second qualifying session to determine the sprint race grid.

However, Formula 1’s near-monopoly over the timetable at a Grand Prix – be it the poorly-utilised four hours of free practice, or the times where there’s nothing on track because people have come down from the exclusive Paddock Club to have a wander around the pitlane (there were seven such events timetabled in Spain) – doesn’t make that easy.

Using second-quickest times wouldn’t help drivers who’ve had a bad qualifying, but two similar grids is a better situation than a sprint race grid that adds further punishment to those who have had a tough feature race. I would take out some of the lottery and makes the grid more representative of drivers’ pace and abilities.

Of course the misfortune that struck the exciting talents last weekend was arguably a one-off, but as mentioned earlier, those sort of problems are more likely to hit the lesser-experienced drivers, with the series veterans having gone through that pain and learnt how to avoid it. And this four-year formula in GP2 is only working to ruin every drivers’ F1 chances, with talented drivers likely to lose their backing, run out of money and get written off by those who matter.

Forced into keeping the existing chassis to cut costs, GP2 needs to take action to make itself more rookie-friendly, and in my opinion, changing the grid format is something they should consider for next season. A bit of misfortune shouldn’t be wrecking talented drivers’ weekends.