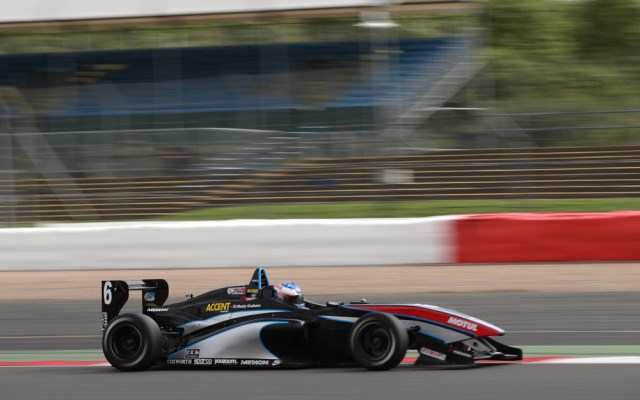 Matthew Graham secured his second win in BRDC Formula 4 with a controlled drive from pole position in the first race of the weekend at Silverstone.

A good opening lap put the SWR driver 1.7 seconds ahead of the field, and although the gap remained under two seconds for much of the race, he was able to stretch his advantage to 4.4 seconds by the chequered flag.

Charlie Robertson got up into second place on the first lap and kept Graham in his sights until being re-passed by Jake Hughes. Robertson spun, but managed to hold onto third place. Second, meanwhile, extends Hughes’ championship lead to 23 points.

After starting seventh, Hughes’ nearest title rival Seb Morris made his way up the order during the course of the race to finish fourth. He, James Greenway and Jack Barlow had all relegated Raoul Hyman from fourth to seventh on lap seven, with Barlow then stealing fifth from Greenway one lap later. Ross Gunn took eighth ahead of Matt Bell.

Gustavo Lima ran fourth on lap four before being shuffled back to tenth, where he was then tipped into a roll after contact from James Fletcher, putting both out of the race but emerging otherwise unscathed. Pietro Fittipaldi inherited the final top ten spot.

Jake Dalton was spun out on the first lap, dropping him to fourth in the title race behind Barlow.