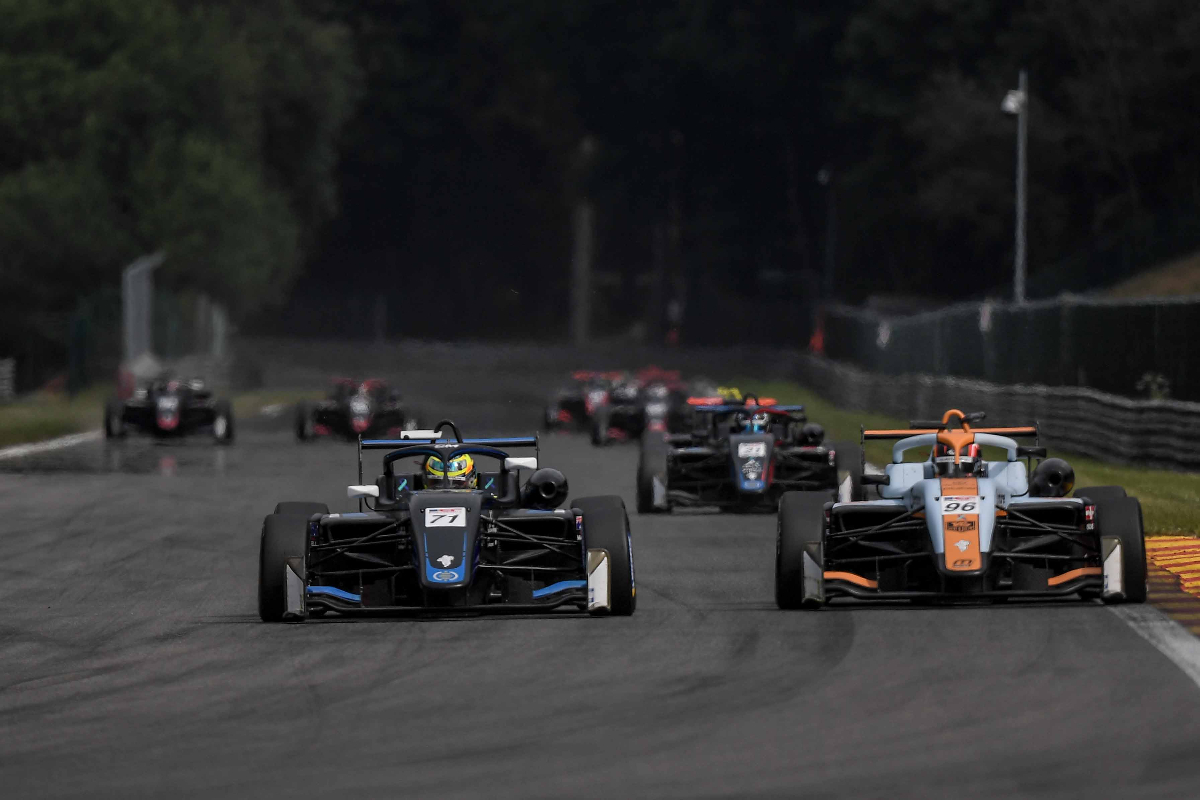 The championship leader started sixth on the reversed grid, with title rival Christian Mansell two positions ahead, while Van Amersfoort Racing’s Sebastian Ogaard had the number one grid spot.

Ogaard did finish the opening lap in the lead, with team-mate Filip Ugran in second ahead of Motopark’s Alex Garcia, Mansell and Goethe who already swapped positions once during the lap.

The top three went three-wide down the Kemmel Straight on lap two, with Garcia briefly on the grass and he got past Ogaard on the inside just as Ugran did the same to claim the lead.

Goethe dived down Mansell’s inside at La Source on lap three but went past the slip angle of his rear tyres and had a sideways moment that prevented him from staying alongside his rival. It did mean he could tuck in behind through Eau Rouge and immediately challenge Mansell down the Kemmel Straight and attempt a pass at Les Combes.

In what proved to be the crucial point of the race, Goethe went across the runoff at Les Combes and ended up ahead of Mansell as he did the same and then bounced over the kerbs as he rejoined the track and lost places.

With no option to return the position gained without losing further places, Goethe chose to hunt down the top three and he passed Ogaard for third down the Kemmel Straight next time by just as Garcia took the lead from Ugran.

Garcia weaved down the straight to prevent Ugran from reclaiming the lead a lap later, but all it did was bring Goethe closer. He passed Ugran and Garcia on the outside at the Bus Stop chicane in two successive laps, then shortly after was informed he had a five-second penalty for gaining an advantage with his move on Mansell.

At the halfway point of the race he let Ugran and Garcia through, and Ugran then went off at Les Combes and stayed ahead despite backing off – resulting in a eight-car train forming behind.

Goethe kept his foot in entering turn 13 and went around the outside of Ugran, who then had a wobble, and his passing spot on Garcia the lap after was Blanchimont. Now back in the lead, Goethe unlocked even more pace and pulled away by over seven seconds in the remaining laps to nullify his penalty.

The top three went unchanged for several laps once Goethe was ahead, but Garcia left the door open of lap 10 of 14 and Josh Mason slipped through for third. Mansell passed Garcia at Eau Rouge on the penultimate lap, having cleared Ogaard and Vlad Lomko in his recovery, just as Mason cleared Ugran for second place up ahead.

Garcia reclaimed third at Les Combes, and as he headed to that corner again for the final time he was lining up a move on Ugran. Instead he rode over the rear of the VAR car and crashed out, and Mansell took third. But he then lost the place at the final corner as he ran Ugran off track in defence and Lomko went inside both to claim a podium in a photo finish with the three split by 0.043s.