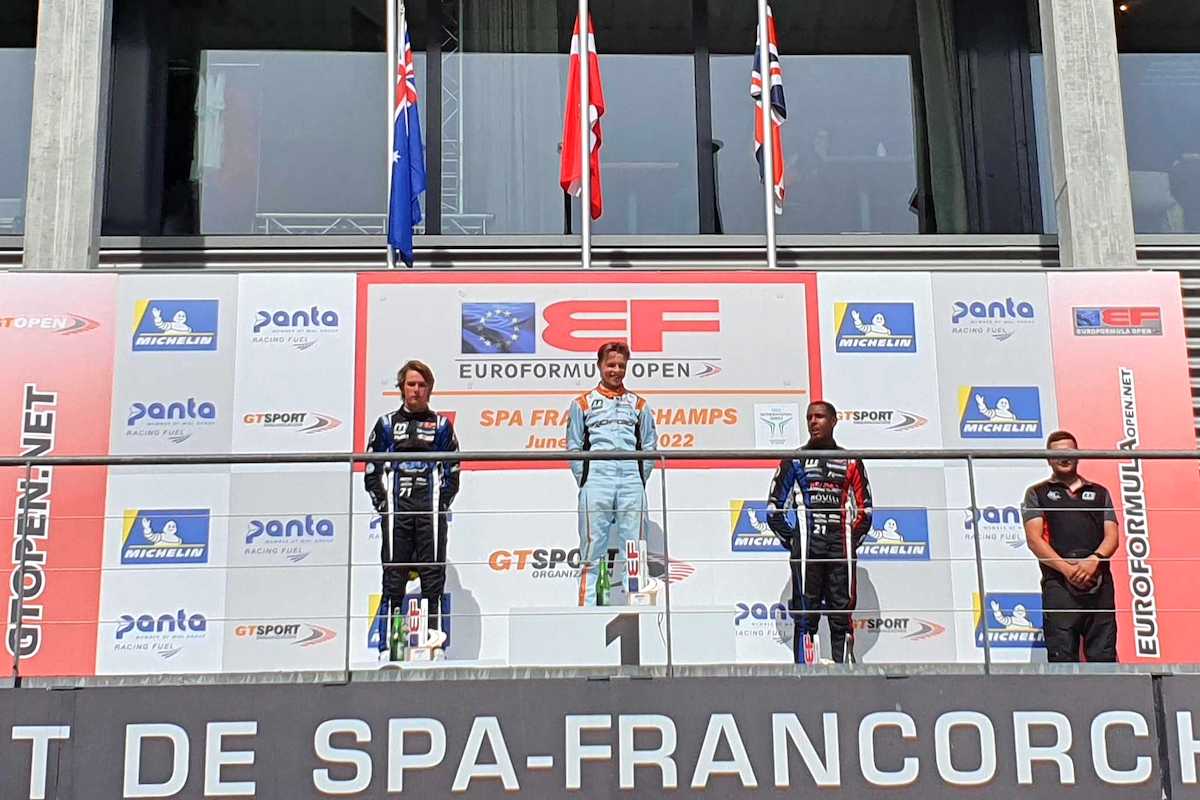 Oliver Goethe extended his Euroformula points lead with his fifth win of the season at Spa-Francorchamps.

The Motopark driver was denied a lights-to-flag success as he was passed by Christian Mansell into La Source on lap one. Mansell, who drives for Motopark’s Japanese offshoot CryptoTower Racing Team, started third on the grid but instantly passed Van Amersfoort Racing’s front row man Filip Ugran and found space was left open on the inside to pass Goethe too.

Goethe had the benefit of the slipstream down the Kemmel Straight though, and reclaimed the lead with ease. Although the advantage was Mansell’s on the next lap, he wasn’t able to utilise it to make a pass and after that there was no stopping Goethe as he romped to a 13-second win.

Ugran plummeted down the order through the race and was immediately out of podium contention, with Motopark’s Alex Garcia passing him on lap one for third and holding that position – despite a brief challenge from Ugran on lap two before he went across the run-off – until lap five when he was passed by CryptoTower’s Josh Mason just after Eau Rouge.

Mason had tried to pass the previous lap down the Kemmel Straight, but Garcia had made multiple direction changes in defence to hold him back. However once Mason did get through it was a similar story to Ugran for Garcia as he started to drop places.

Once in third, Mason closed down the gap to Mansell and got firmly onto his gearbox on lap nine of 14. He pressured his team-mate hard for several laps and on the penultimate lap got alongside down the Kemmel Straight.

Mansell tried to hold onto the second place on the outside of Les Combes but went across the runoff and rejoined alongside Mason as they navigated the next corner. He had to concede the place, and was then under attack from Lomko.

Before he had chance to attack Mansell though there was a counter-attack from Mansell as he went back around the outside of Mason at Les Combes on the last lap.

Lomko had started 10th and last due to crashing out of qualifying, and overtook four cars in the first two laps. On lap three he missed the braking point for the Bus Stop chicane and lost some of his gains, but passed two more drivers in the next two laps and then spend several laps hunting down Garcia and then the top three.

Mason was just ahead of him by the finish, the pair squabbling through the Bus Stop, and the Briton secured his first Euroformula podium after one-and-a-half seasons.