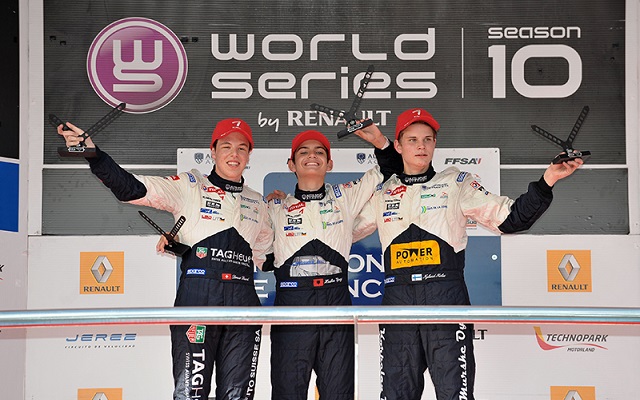 Swiss karting graduate Gjergj Haxhiu picked up his first victory in cars in the reverse-grid race of the penultimate French F4 round at Jerez.

Haxhiu, whose previous best finish in the series was just a tenth place, was at the helm of a podium, which saw all three drivers record their first podium finishes in the series.

The 15-year-old started the race in reverse-grid pole and kept the lead off the line, as David Droux moved up to second past Niclas Nylund and Paul Hokfelt.

Haxhiu then kept Droux at bay over the subsequent laps and then managed to establish a safety gap over his compatriot, who came under pressure from Hokfelt.

By that point, race one winner Joseph Mawson had fought his way up to fourth from tenth on the grid, but the Australian ended up stuck behind Hokfelt for three laps straight before making contact on lap eight, which led to both of them retiring.

The safety car came out and the track could not be cleared in time for the race to be resumed, so the event was red-flagged with one lap to go, handing the victory to Haxhiu.

Droux and Nylund picked up their respective maiden podiums in second and third, ahead of Valentin Moineault, Denis Bulatov and Dorian Boccolacci, who moved into second in the standings.

In the standings, Sorensen leads at 298 points, with Boccolacci at 212 and Hirsiger at 207. The Dane is in prime position to seal the championship title in the third race of the weekend, as only 80 points will be available during the final round of the year.